Renée Thompson talks about The Bridge at Valentine 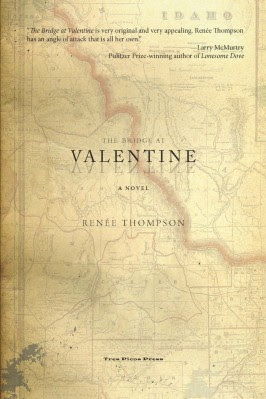 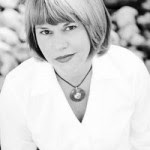 Who can resist star-crossed lovers? Not me. And especially not when said lovers are in an imaginative, fiercely moving new debut, Renée Thompson’s THE BRIDGE AT VALENTINE (Tres Picos Press). A retelling of Romeo & Juliet, set in 1890’s Idaho, the book tells the story of July Caldwell, the daughter of a sheepman, and Rory Morrow, the son of a cattleman, and their fathers’ desire to control the rangeland and their children. Renée expertly crafts a protagonist willing to oppose her Mormon father by falling in love with a Gentile, exposing a world where trouble comes not from the head, but the heart. Ultimately, July learns that women trapped by fate or circumstance have a choice, but with choice comes consequence.

Thanks, Renee, for letting me ask you all these questions!

Where did the idea of this novel come from? How and why did you play with the whole idea of Romeo and Juliet?

I was reading John Steinbeck’s EAST OF EDEN, and was struck by his use of an allegory – the story of Cain and Abel from the Bible’s book of Genesis – to create his characters and plot. Until then it hadn’t occurred to me to try such a thing, but I was so captivated with this technique that I was determined to try it too.

About the same time, I happened to be reading my grandmother’s Book of Remembrance, which is a Mormon journal of sorts. In it, she recounts a story where a cattleman named Alex Durty shot and killed a sheepman, Tom Nook. As soon as I read that, I knew I had the makings of a Hatfield versus McCoy scenario, but I knew too I didn’t want to write a traditional Western. In trying to think of similar plots, it occurred to me I could use Romeo & Juliet as a template, which would serve as a guide, knowing too I would radically alter the plot. That template provided the primary characters of July Caldwell (Juliet Capulet), Rory Morrow (Romeo Montague), Preston Forbes (Paris), Tom Blakely (Tybalt), and Mads Larson (Mercutio), and allowed me to fashion a story that was uniquely my own.

You live in Northern California, but all the scenes in Idaho are achingly alive. What was your research like?

Researching the novel was a joy, and one of the best trips my husband Steve and I have taken together. Steve is a former wildlife biologist and range conservationist, and we drove to Idaho in the late summer – a scouting trip, of sorts – to check out the landscape. Because my grandmother’s father was a sheepman, I wanted to see where she had grown up, and to understand how July’s father’s ranch might fit into my vision. Every so often we would stop so Steve could point out various grazing concerns – where sheep or cattle had overgrazed the land, and where it had been well-tended. We had lived in southeastern Oregon when we were younger, so I knew sagebrush well, but he introduced me to rabbit brush and bitter brush, and helped me understand what a switchback was, and a swale. We took a lot of photos and when we got home I created a map on butcher paper, using felt pens and prints of the photos to forge my fictional homestead. It was a great tool, as it included, for example, mileage from July’s house, near the town of Morning Tree, to the bridge at Valentine, and then on to Rory’s ranch. I’m directionally challenged, so referring to this map kept me from making mistakes in my writing that I might have otherwise made.

I also met with two sheep families – one in Loma Rica, California, and another in McCall, Idaho, and talked to cattle ranchers about grazing issues and opportunities. I read a lot. And the mother in Amy Tan’s novel THE BONESETTER’S DAUGHTER inspired the voice of my Chinese sheepherder, Pun.

I love the whole idea of a female look at the tough American West, especially with such a strong character as July. How did you go about creating her?

I wrote the last scene first, and that gave me a solid appreciation for and understanding of what kind of woman July would become. Readers often ask if I am July, and the answer is no. Like most writers, I gave my protagonist qualities I wished I possessed; July was braver and more adventurous than I was as a young adult – I’m afraid of horses! What we have in common, though, is a serious respect for and love of the land, and a belief that God and Church exist in the outdoors.

I’m always interested in process, so can you talk about the writing of this book?

When I’m writing a novel, my husband tells me I’m my own worst boss. I’m pretty disciplined, which means I start writing at 9:00 a.m., keeping at it until I’ve completed 1,000 words. Sometimes it takes all day. Sometimes I don’t make it, stopping after six hours or so to work on something else. I’m not speedy and I’m not prolific. The worst day writing I ever had netted 276 words. The best was 1,900, a rarity.

What’s obsessing you these days and why?

I wrote a short story called “Radio Gal” that I had hoped to workshop at Sirenland last spring, but it wouldn’t come together. I’ve destructed and reconstructed it maybe five times now, and it’s still not working. I’ve let it go for the time being, but it’s haunting me. I’m hoping I’ll be able to use at least some of it in another story I’m thinking about, but maybe not. (It might be like that comment you made on Facebook once, Caroline: “I just deleted 10 pages and kept ONE line.”)

I’ve been asked if a sequel to BRIDGE is planned, but I’m inclined to say no. I think I’ve told the story.

Dear Caroline and Renee,
Thanks for an insightful glimpse into what promises to be a great debut novel. Congrats, Renee, on all your hardwork paying off. I'll look forward to reading The Bridge at Valentine...super title.
Arletta

Arletta, I'm so pleased you hopped onto Caroline's blog to check out her very generous interview with me. Thank you for your congrats, and for the compliment on the book's title. I hope you enjoy the story.

Great interview. It made me thing about my own process as I read.