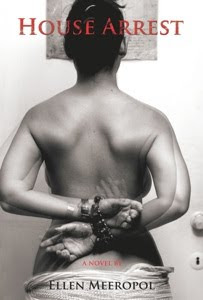 Ellen Meeropol's House Arrest is well...arresting. Heidi Durrow calls it "a compelling debut" while Julia Class raves that it is “smart, provocative, and moving." I want to thank Ellen for answering all my pesky questions here.

What particularly impressed me about House Arrest were all the moral choices going on. Both Emily and Pippa have to make a choice about whether or not to break the law, for their own reasons. How do you go about crafting a character?

The spark for this book was a short article in the Boston Globe about a nurse who was assigned to monitor the pregnancy of a cult member. Her patient was under house arrest pending investigation of the death of a child living in the cult. It captured my interest so I clipped the article and put it in my “ideas” folder. A few years later, I still occasionally found myself wondering what it would be like for a nurse to build a therapeutic relationship with a cult member, with some whose health beliefs were so different from her own, and decided to explore the story. In my imagination, the nurse and an Isis cult member became friends and the novel’s ethical dilemma developed from that friendship. I had no idea where the narrative would go, but I knew the conflict had something to do with the care-giving relationship and with prejudice against the cult.

When I’m crafting characters, I often imagine them Thumbelina-sized, sitting on my shoulder and whispering their secrets into my ears. Perched on one shoulder, reserved home-care nurse Emily told me about her childhood in Maine, how she lost her parents because of their political activism, and how she believes that living by the rules will keep her safe. On the other shoulder, Pippa revealed what she discovered about her father, and why she had to leave Georgia, and how the Family of Isis welcomed her.

A sense of place and the natural world are important to the way my characters grow. House Arrest is set in the Forest Park neighborhood of Springfield, Massachusetts, where I lived for many years, and on an island off the coast of Maine, where most of my fiction takes place. I work surrounded by hand-drawn maps and elaborate family trees, grounding my characters in our shared imaginary world.

You come from a background of nursing which infuses this novel. How different is Emily from you?

I worked for many years as a pediatric nurse and nurse practitioner, particularly with children with spina bifida, the condition that Emily’s beloved cousin Zoe has. I never did home care, so I had to learn from colleagues in that field. I have worked with patients from different cultural backgrounds, people who have wonderfully varied ways of looking at health and illness, and I’ve always been fascinated by those differences.

Emily is not based on me (for one thing she’s half my age) but aspects of her character are drawn from young people I have known whose activist parents made choices that had terrible consequences for themselves and their families. Emily is haunted by her parents’ actions and frozen in her own life. Nursing is a way for her to connect with people and she’s good at it.

I read that you didn't begin writing fiction until your fifties. Why not? And what jump-started your desire? What was that like?

Some days I wish like anything that I had started writing much earlier. That way, maybe I wouldn’t be publishing my first novel and applying for Medicare at the same time! I’ve always read a lot, and I often thought about writing fiction. For many years I scribbled ideas on napkins and corners of the newspaper and collected them in that “ideas” folder. But it wasn’t until 2000, when I was planning a two-month “sabbatical” so that my husband could write his book, that I realized that it was a perfect time for me to jump in too.

We rented a cottage on that island off the coast of Maine that I mentioned before; there I met my muse and she literally changed my life. I wrote all the time. Three years later, I entered an MFA program and then I took early retirement from my nurse practitioner job. Re-inventing myself in my fifties was both humbling and exhilarating. Regardless of my age and my past life as a competent profession, I was a beginner again, free to experiment and make lots of mistakes. It continues to be a terrifying and liberating experience.

The novel talks a lot about forgiveness, and how whether we actually should forgive. Do you think there ever is anything that is unforgivable? Should compassion rule us more than our laws?

I don’t really have an answer for that question, Caroline. Whether or not to forgive something that feels unforgivable is such a personal decision. If I wanted to tell people how to live, I’d write essays or self-help books. As a person and a writer, I’m fascinated by situations in which well-meaning people make questionable decisions that have awful consequences and novels let me explore those stories, with made-up characters. For my characters, sometimes forgiveness is the only way to heal.

Can you talk about your writing process?

I’m a seat-of-the-pants writer. I start with a character, or a scene, or sometimes an image, and follow it to see where it takes me. I write at the computer, in a very messy office strewn with books and papers and magazines and folders and notes and maps and photographs. I’ve never made an outline, although I’ve often wished for one. I once heard E.L. Doctorow say that for him writing a novel is like driving on a dark road at night, with only your parking lights for illumination. You can only see ahead a short distance, but that’s all you need to keep going. I’m working on my third novel manuscript now and am just beginning to trust the process.

Another part of my process is having multiple narrators. I love reading books that offer the story from several points of view, and that seems to be the way writing narratives develop for me as well. The stories that fascinate me often involve complex perspectives. I enjoy developing my novels by alternating between four or five characters, taking turns sitting on my shoulders and opening their hearts to me.

What's obsessing you now in your work and why?

No matter what I’m writing, my obsessions tend to poke their nose into my characters’ business. In general I am obsessed by the way family legacies shape our lives, and by the interplay between our actions, especially relating to political activism, and the consequences of those choices.

Right now I’m working on a manuscript about a university professor who is kidnapped and taken to a civilian detention center on an island off the coast of Maine for interrogation. This is new territory for me and this book is frightening to write. One of the multiple narrators is a guy who believes that torture is warranted to protect national security. It’s enormously challenging to try to inhabit this character in order to write his scenes.

You didn’t ask me what the biggest surprise has been so far in the debut of my first novel. My answer would be the generosity and bigheartedness of other authors (like you!) and by readers. Publishing literary fiction is such a difficult business; there are so many books and so little space for “success.” But I’ve been amazed by the welcome from established authors, by the support, the blurbs, the suggestions, the camaraderie, and the generous response by readers. Thank you!