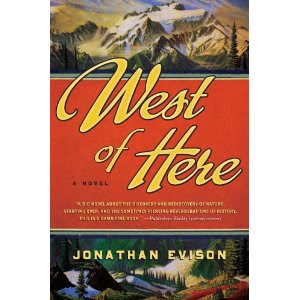 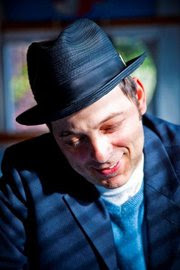 I can't tell you how thrilled I am to be asking Jonathan Evison questions on my blog. First, you have to know that he's a knockout, genius writer who has written THE book of 2011. (Don't take my word for it, look at the starred advance reviews from PW, Booklist and Library Journal. Look at how Vanity Fair raves and he's the number one indie pick.) But even more importantly, you have to know what an incredibly funny, kind and truly generous guy he is. I personally would like to bottle him and sell him if I could. (How about, it Johnny, we could make a killing.) So thanks, Johnny, for both the incredible book and for the personality that goes along with it.

I read somewhere that you wrote this before All About Lulu? I loved Lulu but this book is so much larger in scope I’m trying to figure out how one evolved from the other. Why didn’t you publish this one first?

Nah, I was researching West of Here while I was writing Lulu. Lulu being a first-person voice novel, practically wrote itself. I knew with West of Here I really wanted to push myself as a craftsman. I wanted to use every tool in my belt and a few I didn't have. It's rather shocking to me--after the fact-- that the novel has enjoyed such a broad appeal. With 41 limited points-of-view, and a hundred odd years to cover, i was afraid I might lose a lot of readers.

You also told me that part of why you have such thick skin is that you wrote six novels before All About Lulu that no one wanted. I find this incredible, both that no one wanted them, and also that you were able to persevere and keep writing and remain incredibly cheerful. Was this out of need or belief in yourself or both?

If you'd read most of them, you see it wasn't so incredible that nobody wanted to publish them. The first three were all out stinkers. As far as what keeps me going, it's the process of writing itself. I need it to distill all the stuff life throws at me. Not that it's always a barrel of monkeys--writing West of Here probably took a couple of years off my life. And writing the book I just finished, literally broke my heart. But I always feel like I come out the other side a better person.

Where did the whole idea for West of Here come from and how did you manage to seemingly effortlessly juggle all the story and time lines?

Well, I wanted to bring the history of the Olympic Peninsula--the history of America, really--to life on the page. But I didn't want to write a historical novel, per se, rather a novel about history, about footprints, who makes them and who follows them, etc. And rather than employ a wide-angle lens to historicize the material, I wanted my lens to be a kaleidoscope of overlapping limited points-of-view, so that the living history which I sought to create, was democratic. In my experience, most "histories" only tell one side of the story. As far as juggling all those POV's, it wasn't effortless--it was a big fat pain in the ass, but in the end, exhilarating.

Gertie, one of my favorite characters in the book, says that a “person is made up of choices”, an idea which keeps playing out through the book. But how much real choice do you think we have in our own choices, especially when we are hurtling through the forces of history?

Well, for starters, you have the choice to complain or make lemonade, as it were. I think this fundamental choice in outlook has a far-reaching effect on any life, and also on all the lives that touch that life. Determination and optimism are choices, and from what I've observed, they can pay big dividends. Or not. Either way you feel better, and the people around you feel better.

The line “we are haunted by ourselves” links the past to the present (at least it does for me), Do you think it’s ever possible to escape our past, all that has come before us, or do you think it is coded into our DNA?

Absolutely it's possible to escape our past. It may be hard as fuck, but it's possible, and we all know folks who have done it. I don't think you can outrun your past, I don't think can hide from it, but I know for a fact you can turn around, look it in the face, accept it, and move on. That's what Port Bonita is trying to do, and that's what America ought to do. The world, really.

I deeply admired how the tone and the writing changed in the historic parts and present day. How difficult a hire wire act was this? Did you ever feel discombobulated?

To write these two epochs in American history in the same voice would have been a disservice to the narrative, I think. We don't speak the same language we did in the nineteenth century, figuratively or literally. Manifest destiny, for instance, is no longer a commonly accepted ethos. We know longer think anything is possible, not without without paying a few fiddlers, anyway. Cynicism is far more common these days. And the government's not giving away land to anyone with a shovel, anymore.

OK, tell me what’s coming up next for you besides richly deserved fame and glory and maybe some more rabbits?

Well, I'm done with my next novel, The Revised Fundamentals of Caregiving, which will pub sometime in '12 or '13. Again, it's a departure from West of Here, which is a novel of big themes and ideas. The Revised Fundamentals of Caregiving is a novel of the heart. I think it is at once the saddest and funniest thing I've written. At present, I'm deep into a new novel, The Dreamlife of Huntington Sales, which is possibly a more ambitious narrative enterprise than West of Here. IF IF IF it works-- but the real joy, is finding out.

Congratulations, Jonathan for all your starred reviews. I love your title.

Thanks, Caroline, for bringing this book to my (and other's) attention.

. . .thanks, jessica, and of course, thanks for the love caroline, you're a peach!