Susan Straight talks about Take One Candle Light a Room 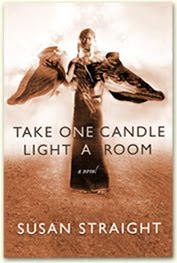 Breathtaking prose, a gritty sensibility, and a fearless delving into racial issues--any of these words could describe the sublime Susan Straight's novels. A National Book Award finalist, Susan Straight has written six glorious novels and is a professor at the University of California. Take One Candle Light a Room follows Fantine, determined to help the godson of her murdered best friend, even as the past begins to threaten any sort of future. Thank you so much, Susan for answering my questions.

What do you think the answer is to how we find our place in the world, which I think is the question your novel is asking? I found it really interesting that Fantine keeps her own family at arm’s length and yet is invested in the son of a murdered friend—as if that is somehow an easier bond.

I found again and again while writing this book that my main theme was: There are people who stay and people who leave, which is what Fantine knows her mother believes, and I realized that Fantine was kind of my fantasy woman, someone who has made sure she has no actual place to tie her down with those bonds of obligation and responsibility, someone who has only a few items in her refrigerator, someone who can love a city for a week and then just feel vaguely sentimental about it. But I think when she realizes that Victor is actually a lot like her, and he calls her on that, she thinks about how little she actually has, and how much she was given.

What sparked this novel?

This novel was sparked by the oddest images and sights. Two blocks from my house, there's a vacant lot where a house must have burned down years ago, and I saw kids from the city college parking there. I wrote two stories about a kid who's really intelligent and misses taking his SATs because his mother is a crack addict, the most beautiful woman in her community, and then I remembered two real women: one was the most lovely woman I've ever seen, even now, and I have three beautiful girls. But this woman rode the bus with me when I was a freshman at USC, and she was a secretary; she was iridescent, and men followed her around, and she was so sad and ignored them. The other woman was a 17-year-old girl, pregnant, found murdered and left in a shopping cart in a vacant lot I pass every day on my way to work; her mother said to the newspaper that the police wouldn't really investigate because no one would care about a girl like her daughter. So I wanted to know what happened to this kid, and his mother, and his brain.

The novel is also very much about race and being an outsider. There’s light skinned Fantine, dark-skinned Victor and Fantine’s father who wants to shield Fantine from prejudice. Do you personally think, given America’s attitudes towards race, that racial equality will ever be a given? Is it possible to embrace a future without still bearing the scars of the past?

If you look at all the newly-okay use of the n-word and all the racist language floating around right now, language I know we didn't hear back in the 1990s or even in 2005, how can my daughters and I ever think that race will not be the measure by which people still judge each other? Rosette, my youngest, is a sophomore in high school, and for her AP European History class, she was studying a packet last night in which she had to define "mulatto" and "mestizo." We always laugh in our family - if someone is a "mulatto," that means half African and half European. So, as in the novel, if a mulatto marries a mulatresse, and then five generations later they are still marrying "light-skinned" people, how half are they? What percentage of what is what? My kids are Swiss, French-Colorado-Illinois white, African, Cherokee, Irish plantation owner, and mystery people whose race no one ever knew - so are they black, or mixed, or do we have to do that forever?

Your use of language is just breathtaking. Do you feel the language is as important as the story, or can you even separate the two?

For me, everything is language, and character, and setting, and dialogue, and all of it is language - how you're going to make the reader see it, hear it, smell it, with description. I think my job is to make people cry. That's what my daughters tease me about.

I found it really interesting that you said in an interview, that no one calls your novels any genre because they don’t know how to classify them. I personally think this is a great thing but how do you feel about this? Why do you think this is?

That's a great question. Don't you think men write "Social Novels" and women write "Domestic Novels," according to some people, when really some great Social Novels are Mystery (think Pelecanos and Burke and Mosely and Laura Lippman), and some are Historical Novels (think Pat Barker and Toni Morrison!) and some books are just great novels. I like to think I write novels that are uniquely American in the way that Flannery O'Connor and Louise Erdrich and Morrison and Joyce Carol Oates and Saul Bellow novels are uniquely about particular places and people in America. I like to think that writers like you and me and Jennifer Egan and Marisa Silver and Attica Locke are writing those kind of novels.

I read--and found it fascinating--that you started Highwire Moon, your National Book Award nominated novel, when you were 19.What began that novel, and what did it take to finish it?

I began to write Highwire Moon one night when I missed my foster sister, Sandy, with whom I shared a bedroom for about four years, until I was 13, and after I'd read an article about a linen company where my dad worked, which had an immigration roundup where a bunch of women were deported back to Mexico, and suddenly I wondered about the children they'd left behind, at babysitters or with friends, and how the children would, of course, blame themselves if their mothers didn't return. Children always think people leave them behind because they don't love them. Then, I wrote those 50 pages by hand, and had no idea what the Mexican mother, Serafina, would actually do to try and find the daughter she was separated from, until I was 34. I had three kids by then. I went to Oaxaca to find out.

How does teaching other writers impact your own work?

I love teaching other writers. Next quarter I'm teaching a class I wrote called Working Class Fiction, with novels about people's labor and life. (I met an editor once who said writers had stopped writing novels where people had jobs, and I know I never had! She laughed that my characters were always obsessed with work.) I will teach Helena Maria Viramontes, Stewart O'Nan, Michael Tolkin, Ernest J. Gaines, and Anza Yezierska. It only impacts my own work in that I get to admire and appreciate them, and feel a sense of community with people I never even see or meet - I live in a place where hardly anyone even knows that I write.

What question did I forget to ask?

Those were great questions, some that I've never heard before!

Really enjoyed this, Caroline (and Susan!)

Thank you both for the great questions and answers-- and for Beth (above) for pointing us here!

you are really a just right webmaster. The site loading velocity is incredible.

It sort of feels that you are doing any unique
trick. Moreover, The contents are masterwork.
you've done a fantastic task in this subject!