LIly King talks about Father of the Rain 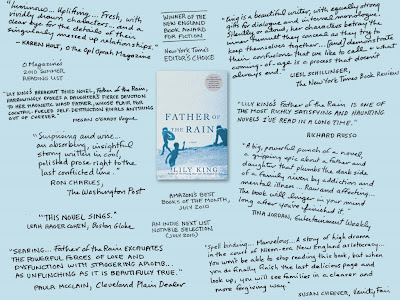 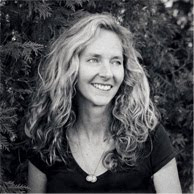 As you can see from the rave reviews above, Father of the Rain is a knockout novel. And it's no surprise, really. Lily's first novel, The Pleasing Hour (1999) won the Barnes and Noble Discover Award and was a New York Times Notable Book and an alternate for the PEN/Hemingway Award. Her second, The English Teacher, was a Publishers Weekly Top Ten Book of the Year, aChicago Tribune Best Book of the Year, and the winner of the Maine Fiction Award. Father of the Rain, her third novel, was published in July, 2010. Lily is the recipient of a MacDowell Fellowship and a Whiting Award. Her short fiction has appeared in literary magazines includingPloughshares and Glimmer Train, as well as in several anthologies.

I was really interested in the structure. You present her childhood with her father and then take great leaps forward in time. Other writers might have started in the present and woven in the backstory, but this particular structure gives the novel a shimmering kind of immediacy. Was this intentional, or was it just the way the novel played out as you wrote it?
As an idea, the novel really started from the point-of-view of Daley at 11. The rest grew slowly out of that. I didn't even know there was going to be a third section, a third leap in time, until I was nearly finished with the second section. It didn't occur to me to change the structure, but I did worry that these great jumps wouldn't work. I love it when novels do that, Disgrace and The Reader come to mind, but I'd never tried it before and I worried there was a trick to it I didn't know about.

Why do you think the things that happen in our teens have such continued and lasting impact on our lives as adults—even things that we should know better about?
I think it is very hard to break out of emotional patterns with a parent that were fixed in childhood. It's hard to see things afresh. It might be easy to know the relationship is unhealthy, but it's hard to know exactly why, and how to step out of the dance. It's also hard not to recreate the same patterns in other relationship, unless you really break free. Which is what the book is all about, Daley's struggle to unlock herself.

One of the rave reviews (and there are many, many, many) I read mentioned the primal loyalty Daley has to her incredibly dysfunctional father, and it’s that word, primal that interests me so much. Why do you think we are so attached to the people who can hurt us the most?

I think we are attached to the people who raised us, and it can take a long time to identify whether those people are healthy or unhealthy, comforting or menacing, safe or dangerous. there are many ways to be hurt, and some are less obvious than others. I really don't think it's a natural instinct to be drawn to people who hurt you, but the people you love always have the ability to hurt you the most, because you are most emotionally vulnerable with them. The trick is choosing to love people who choose not to exercise that ability, who derive no pleasure from it. I think Daley's father, among his other issues, was drawn to that kind of power over the people who loved him.
The psychological impulses in the novel are both shattering and profound. Daley’s struggle to do right by herself and her father are never quite what you expect them to be
She does not make great choices, does she? i think she makes the decisions of someone who feels perpetually guilty, and has a burning desire to change the past. So she plunges in, much to the detriment of her own life and future.
I’m always fascinated by process so can you tell me something about yours? Do you outline? Do you write by the seat of your pen? And is every book different?
I write every book more or less the same way, by hand with a pencil in lined spiral notebooks. A whole novel is really only 2 notebooks' worth of writing. I leave about 20 pages blank at the back of each notebook for notes, so that when I get ideas for something that might happen later, I put them in there. And if I take notes in the middle of the night or in the car or while I'm reading, I transcribe them into that back section of my notebook. With the first two books, I wrote a chapter by hand then typed it up, three-hole punched it and put it in a binder, but with this one I couldn't look back. Once I got the words on the page, I had to keep moving. It was an emotionally hard book to write and sometimes I had to take long breaks from it. So there was a point when I had to type up about 180 handwritten pages. I'm a really slow typist and it took months. But I love that step, because you are literally rewriting the book. You are writing it all over again and you hear it differently and it makes for a good revision step. Add it's so pleasurable, because the blank pages stage is over. This time I did eventually create an outline—it was more of timeline—when my notes got too unwieldy and I wasn't sure where I was going next. It wasn't at all extensive, just a line across a page with a series of markers and a few words below suggesting a possible scene.
What’s obsessing you now?
My new novel. I'm only in the research stage, but already passionate and terrified in turns.