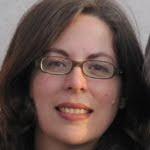 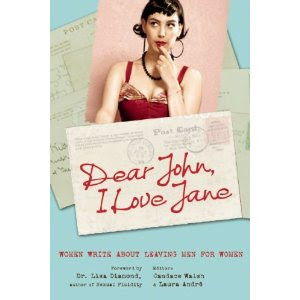 Candace Walsh is hilariously funny, a brilliant cook (all you have to do is follow her on FB to yearn for her to invite you to dinner), and one of the warmest people on the planet. Along with her partner, Laura Andre, she's producing some of the most interesting books around, including Dear John, I Love Jane, a collection of essays about women who left men for other women.
I'm thrilled to be able to ask Candace questions here.
One of the things I wanted to ask about was that judging from the essays, it takes real bravery to leave a man for a woman, to risk the status quo for true happiness. Do you think that it is easier now than it was years ago, or is this a media myth?

I definitely think it's easier now than it used to be. Just reading our book's precursors from the 80s and 90s (From Wedded Wife to Lesbian Life; And Then I Met This Woman) shows that it used to be a much harder choice to make. Women lost custody of children, were shunned by their communities, and also evidently felt like they needed to shear off their pretty locks and get godawful haircuts. (That last example is a bit facetious, but has a grain of truth.)

There were very few people who responded to my "news" with a horrified cringe. I was thoroughly surprised at how many friends and acquaintances said, "Right on, sister!" or "You go, girl!" And next to the high fivers were the quietly unfazed people, who gracefully communicated that it was a non-issue. There are probably some purse-lipped types who don't approve, but nobody has given me a hard time to my face. What I hear is "You're so much happier. It's so obvious. And I'm happy for you." Being in same-sex relationships is a much roomier place to be than it used to be. One thing that does sadden me is that I don't have the carefree public display of affection option any more. I might be the type to hold hands with my girlfriend in a big box store, but my partner, Laura, is not comfortable doing that kind of thing; and I totally respect that. Her reticence has probably saved us from some randomly ugly encounters. But I do miss the privileges I used to take for granted, from legal rights to canoodling without going through an internal evaluation process.

We feel like we're part of a wave of growing awareness about the unpredictable nature of women's desire. Nicole Conn's new film, Elena Undone, has the same storyline as our 27 essays: woman partnered with a man meets woman, falls in love, redefines her life.
Jodi Picoult's next book is about a married woman who falls in love with a woman. Public awareness is building, as is the body of artistic work that respectfully and supportively reflects these experiences.
I loved the whole refrain through the book of women discovering who they really were meant to be and how empowering that was, and also how fluid sexuality really is. It's wonderful to read about women being so open to their real desires, but on the other hand, our society now seems to be making an alarmingly far right turn. How does someone deal with being who they are when a backwards portion of society is so against it? Is there a solution for eradicating ignorance?

I don't know the answer to that one. I think that there are a certain group of "swing" people who will be swayed toward supporting gay rights if they know gay people personally, which is an argument for being more widely out. I honestly do think that although there's a wrestling match between the left and the right, we've advanced so far--gay marriage is legal in five states--and it's really a matter of time. Being anti-gay has gone from being an acceptable status quo to being a bigoted, shrill, tacky position. Just look at how Cindy McCain has supported No on Prop 8 and the end of DADT, and then pretty much recanted. To me, that kind of wobbliness indicates an encouraging vulnerability within the Republican party. One thing I learned when I jumped the fence, as Audrey Bilger puts it in her essay, is that just living my life, without waving a single picket sign, is a political act, whether I choose that or not. It just is. It's a bit weird, given that I spent my twenties and half my thirties in the bosom of middle class, heterosexual respectability and approval.
How do I deal with being who I am? I just do it...and it feels so good on a soul level, and in my circle, that other nasty business that crops up is kind of like a hornet veering by or a pesky mosquito hanging around. It's not going to make me pack up my beautiful picnic lunch. I have had to engage in a spiritual practice of letting go of the things I can't control, and making the most of my deeply gratifying life. I'm very fortunate.

What sparked this book? How easy was it to get women to tell their stories? Did any of the stories surprise you?

I wanted to find this book and read it, but it didn't exist. The books I mentioned earlier are good, but they felt dated. I was having an experience that Cynthia Nixon was having, that Portia deRossi had; when these books were written, no glamorous, high-profile women were doing what I was doing...because they felt it would be career suicide. But that's not the case for women now.

Laura and I sent out the call for submissions...we waited...and received a deluge. 130 submissions. And they were so good! Narrowing them down to 27 was no picnic. But there was something so powerful in the emphatic, abundant response. So many other women were so eager to see themselves in other stories, to not feel like they were the only ones. My perception of myself changed as I read all of the stories. I was part of something greater...a crowd of women who had this very particular experience with very globally human characteristics.
You mentioned that you are working on a memoir. Can you talk about that?

Yes! I'm writing a food memoir called Licking the Spoon, which will be released in the spring of 2012 by Seal Press. Laura likes to call it a meta food memoir, because I examine the influence 15 cookbooks had on my life, growth, development of my self-concept, as an individual and as an American woman born in the early seventies. Betty Crocker was my mother's kitchen headmistress. The recipes called for things like cream of mushroom soup and celebrated the pastiche of a trickle-down idea of fine Continental (European) dining. Betty Crocker herself was a marketing construction, and she morphed throughout the decades in accordance with what a corporation thought women wanted or needed. I travel through other cookbook experiences as I grow up and figure out what it means to be a woman in this era. The Enchanted Broccoli Forest dovetails with my vegetarian, experimental college period. Martha Stewart is an aspirational role model whom I realize is more of an exacting fusspot...I admire her for all the ways that she is different from me, but part of growing up is making peace with who I am, instead of faking it till I maybe make it. It goes on through the other books, and follows me to the present moment; I am no longer subscribing to other models of living, eating, loving; I am discovering, every day, what is true for me, what I crave, what feeds my soul and nurtures my happiness. And, the book will include my very best recipes.

Right now, I'm the food columnist at AfterEllen.com, which is probably the most fun I've ever had doing anything writing-related. It's so much fun to be a saucy, irreverent Sapphic food writer! The opportunities for double entendre are legion. The column is called Good Taste.
You also mentioned that you and your partner work together on these books. What's that like?

It's so deeply wonderful. It could have been an ugly scene. I've tried to collaborate with less compatible partners in the past, and those experiences were rife with discord and ego-collisions.

Laura and I just happen to really groove together as co-editors. We have different strong points, and they're complementary. I feel like doing this book together has strengthened and deepened our relationship. I have loved learning about her more because of the process we've gone through.

Now I'm beginning my memoir, and Laura is embarking on her own anthology about women and mental health issues, working title, It's All in Her Head: Women Making Peace with Troubled Minds. [link: http://itsallinherhead.blog.com/call-for-submissions/]

It's been a little bittersweet for me. It's like she's going on a trip without me, and I want to come along. But I have such an amazing opportunity to write my own book...and luckily, we'll still be writing in the same room, just like before. It will just be more like parallel play.

Where can people learn more about this book and your upcoming projects?

Our website has excerpts, reviews, event listings, and links...and we have a very active facebook page with discussion threads and fun posts. You can also read more about our co-editing adventures in this Lambda Literary blog post:
And please follow me on twitter @candacewalsh; I'll follow you back! Laura's @lauramandre.
Posted by Caroline at 12:06 PM

Aw, this was a very nice post. Taking the time and actual effort to make a superb article… but
what can I say… I put things off a whole lot and don't seem to get anything done.