Read This Book: Secrets of Eden by Chris Bohjalian 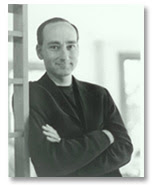 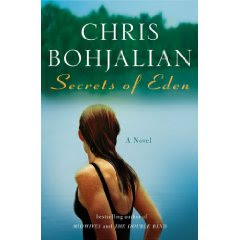 I have to begin by saying that Chris Bohjalian is possibly one of the funniest, most graciously kind people on the planet. In talking with him, I've discovered we both share a love of cupcakes, and we both love moral ambiguity in novels, which brings us to his remarkable new novel, Secrets of Eden. Chris won the New England Book Award in 2002, and his novel, Midwives, was a number one New York Times bestseller, a selection of Oprah's Book Club, a Publishers Weekly "Best Book," and a New England Booksellers Association Discovery pick. His work has been translated into over 25 languages and twice become movies ("Midwives" and "Past the Bleachers").Thank you so, so much, Chris for answering my questions.
Secrets of Eden unfolds the events of a shattering murder-suicide like a prism, revealed bit by bit by each voice we hear from (and I love that one character says, “All of our stories are suspect.”) It’s a perfect structure for the book, but I’m wondering if this was always the structure, or if you played around with other ways of telling this story?

Henry James thought it was inherently problematic to try and write a novel in the first person. A novel, in his opinion, demands multiple viewpoints and the first person limits a novelist to one. (On the other hand, this may be precisely why the first person narrator works so well in a mystery novel: The narrator is as deeply in the dark as the reader.)

Although I don’t fully agree with James, I do understand his argument. I have loved writing novels in the third person, both third person omniscient and third person subjective.

But I also love the idiosyncrasies and fallibility that come with a first person narrator.

Consequently, when I was mapping out the novel in my mind, I always imagined there would be multiple first person narrators, each of whom would reveal a little more of what presumably happened that awful night – and each of whom would have pronounced biases and preconceptions. What I liked most about that idea was pretty simple: It meant the narrators would be very, very human.

The novel, about domestic abuse, is set in a small town, and you yourself have moved from NYC to a small town in Vermont. Do you feel that these small towns, which seem to have, as one of your characters says, an “aura of intimacy” really are more intimate, or do you think they breed more despair and drama—and if so, why? I know you’ve done a great deal of research on domestic violence—have you found that it is looked at and treated differently in a small town than in a big city?

Here’s the reality about Vermont. We have very few homicides, but on any given year the vast majority will involve domestic violence. To wit, in 2008 we had 15 homicides, 11 of which were domestic violence related. If you happen to be murdered in Vermont, the odds are that you will be female and that you will have known your murderer very, very well. I think that’s true in many rural areas. We may not have a lot of drive-by shootings, but, sadly, we have our share of sexual violence and domestic abuse.

Just like a metropolitan area, however, we are likely to look the other way when a woman is an abusive relationship. That aura of intimacy doesn’t necessarily lead people to intervene.

I start with a voice. One sentence. Sometimes I think I am more of a mimic than a novelist. But I can’t start understanding who my characters are until I know how they speak – and so even if I know a character is a minister, I don’t start writing until I hear in my head that one, character-revealing sentence.

And it’s been that way whenever I’ve been working on a first person novel going all the way back to Midwives (1997). I knew who the narrator for that novel was when I heard in my head the sentence that would eventually begin chapter one:

“I used the word vulva as child the way some kids said butt or penis or puke. It wasn’t a swear exactly, but I knew it had an edge to it that could stop adults cold in their tracks.”

For Secrets of Eden, I worked the same way: I waited until I had that one sentence that told me who the characters were and how they sounded before diving in.

Just for the record, the character who was the most interesting to write was Catherine Benincasa. I enjoy listening to prosecutors speak and I knew I had Catherine’s voice when a lawyer I was interviewing started talking about blowback from a handgun and “how much of the bastard’s brains would be up the gun barrel.” (Yes, I did use that in the novel. The alliteration and rhythm were irresistible.)

I was wondering about the title, Secrets of Eden, until I got to the section where the pastor proclaims that there were no secrets in Eden until Adam and Eve ate the apple, and once they did, they had to try to keep it a secret from God, and we in turn, all lost that wonderful innocence. But wouldn’t you also say, that in this book, secrets are really what protects or even saves people?

I love that notion. I really do. I hadn’t thought about the book in that context, but it makes sense.

I enjoy books that have a current of moral ambiguity running through them. And while sexual violence and domestic abuse are most assuredly not moral gray areas – they are, pure and simple, horrific criminal behavior – I do appreciate the moral ambiguities that mark some of the narrators in Secrets of Eden. This, too, makes them human.

The ending is shattering—shocking for the final secret it unveils. You’ve said you count on your characters to show you the ending, and I’m hoping you can elaborate on that with this particular book.

Usually I have no idea how a book is going to end and I really do depend upon my characters to take me by the hand and lead me through the dark of the story. The only exceptions to that would be The Double Bind (2007) and Secrets of Eden. I didn’t know precisely where each character would be when I finished the story, but I did know what had occurred at the Haywards’ house that tragic night when only George and Alice were home. In other words, I knew A and Z. What I did not know were the 24 letters in between, and that was when I needed my four narrators (and, yes, the late Alice) to help me fill in the blanks.

Can you talk about what you are working on now?

I am in the home stretch of a first draft of a novel about an airline pilot who has to do what Chelsey Sullenberger did on the Hudson. . .but fails. Three-quarters of his passengers and his first officer die when his regional jet is brought down by birds and his plane cartwheels and shatters on Lake Champlain.

But he lives, and with his wife and two young children retreats to a house in northern Vermont where he hopes he will figure out what to do with the rest of his life. Unfortunately, it turns out the house has a history and it isn’t pretty. I’m honestly not sure yet whether it’s a psychological study of PTSD or a ghost story. Maybe it’s both.

I really enjoyed this interview, and look forward to reading Bohjalian's new novel.

That's the book I am reading right now. . . . Great interview!

Wow, amazing blog layout! How long have you been blogging for? You make blogging look easy. The overall look of your site is excellent, let alone the content! Payday Loans