Read this book: The Embers 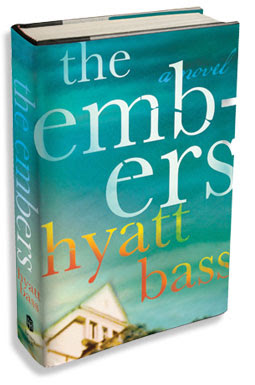 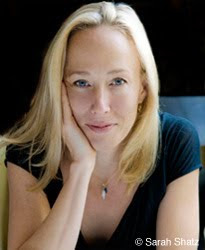 I have become fascinated with other writers' process, and these interviews spur me on in my work, as well as giving me an opportunity to ask questions of writers I admire. I will, of course, blog more about my own process, and whatever else is obsessing me, but while I struggle to carve out some time for myself (I am deep in the writing draft one process!), here's another amazing book. The Embers by Hyatt Bass is a remarkable novel about a broken family--and Bass is a remarkably interesting writer and person.

I was fascinated to learn you trained to become a ballet dancer. Do you feel the obsessive training necessary to be a dancer helped you in being a writer?

I’ve never thought about that before, but I guess it did. For one thing, sitting down on a daily basis to work on something without a boss or a deadline pushing you along is really challenging, and the discipline of the ballet training probably helped with that. Also, I think I learned a certain patience from ballet since it often takes years to get something right. You’ll think you’re just never going to be able to do something, and then one day it suddenly happens. And so that might have helped me keep the faith in my book over the seven years it took to write it.

I was also very interested in the fact that The Embers began as a film. How did it become a novel? (And will it become a script now?)

I’m not sure why exactly, but from the very beginning it felt more like a novel than a film. I kept pushing that idea aside, trying to write it as a screenplay, until the finished screenplay didn’t work, and I thought, okay, why not just try it out as a novel? Once I started writing that way, I was completely hooked. I loved the freedom—the lack of page-limit, and the fact what I was writing wasn’t just a blueprint for a final product, but it really was a final product. Instead of imagining how it might be fleshed out down the line with imagery and actors and so on, I could actually describe imagery or gestures, or whatever, and convey tone or mood and story through so many different devices besides straight action and dialogue.

The gnarled bonds (and bones) of family is a topic near and dear to my heart, yet it seems that when males write about it is considered revelatory (The Corrections), yet when women do, it is demeaned sometimes as “domestic drama.” Obviously, I loved your novel and don’t want to stick it into any genre at all, but I’m wondering your thoughts on this.

I know what you mean because I used to fall prey to that sort of sexist thinking myself. I had a revelation recently that in creating the characters of Ingrid (a precocious adolescent girl) and Joe (a very accomplished 70 year old playwright), I was actually writing about the little girl I still felt I was at the time I began writing the novel, and the successful male writer I aspired to be. Over time, though, my confidence in my own work as well as the discovery of writers like Susan Minot and Marilynn Robinson really shifted my thinking in terms of male writers versus female. Not that I hadn’t admired female writers before, and not that I don’t continue to admire male writers with equal fervor now… It’s just that I’m now fully comfortable with being a female writer, and it’s very clear to me that the perception of female writers as less weighty or serious or whatever is just a sign of prejudice in whoever espouses that opinion. If you took the name and jacket photo off my book—or Minot’s or Robinson’s books, or for that matter, William Styron’s or Michael Cunningham’s or Jonathan Franzen’s books, I’m pretty sure people would have difficulty figuring out whether the writer were male or female.

Everyone in your story impacts everyone else—most profoundly what happens surrounding a death in the family. What made you decide to make the death the fulcrum that the family pivots around? And since you are a mom, yourself, how difficult was this to write about?

I’m so interested in family dynamics and how the people that are closest to one another or love each other the most often have the hardest time connecting. So, to put a tragic incident at the center of the story—something everyone could immediately understand would tear these people apart—seemed like a good way to explore this concept. What I’m really writing about in the book is the way people overcome the sorts of challenges that all families face—not necessarily epic tragedies like this one, but little everyday challenges. Often, though, the best way to explore something in fiction is to take it to an extreme. When I started writing the book, I’d just gotten married, and my husband and I planned to have children fairly soon. So, I was thinking about the risks that lay ahead for me—first of all, in marriage (especially since my parents were divorced) and also in terms of having children. Not only had I had a couple of friends who’d died at very young ages, but I was very much aware of the fact that no matter how much I did right as a parent, I would inevitably fail in some ways, too. While I was writing the book, we had two children. So, that was really interesting because there I was writing about family, and I had suddenly gone from being my parents’ child to also being my children’s parent, and I had a new understanding of family and of the story I was writing—a story told from the points of view of its three main characters: a daughter and both her parents. It was actually really cathartic for me to write about the loss of a child at the same time I became a mother because the fear of all the terrible things that could happen to one of my children over the years created an ever-present anxiety¾which I hear is very typical for new mothers—and facing those fears in my work was comforting in a way, maybe because it allowed me to file them under fiction each day.

You have said that writing fiction is a very safe way to bare your soul. I’m curious why you feel that—since it seems to me that readers are always assuming or looking for an autobiographical hook!

Well, people can guess at what might be autobiographical, and make assumptions, and say whatever they want. But when you’re writing fiction, you’re completely in control in the sense that you’re creating your own world, and your own characters, and scenarios, and only you know where any of it comes from or whether it bares any resemblance to your own life.

There are a lot of wonderful collisions in the book. The past bumps against the present and different family members’ points of view take center stage at different times, yet this prismatic way of telling the story gives a riveting forward-moving narrative. How difficult was that to pull off? Did you outline or map out the novel or did it just happen organically and surprise you?

Thank you! I love that about the book, but it’s also a major reason for why the book took seven years to write. I definitely mapped the whole thing out, scene by scene. And then, of course, surprises and new, exciting ideas would come up along the way that would change the course of things. My agent told me if she’d met me when I was very first starting out, she would have told me I was insane, and that I should just choose one character, and tell the book in a straight chronological narrative. She completely agrees that the way I told the story is what makes it especially intriguing, but we laugh about how complicated and hard I made things for myself, especially for my first novel. It’s really an example of how ignorance can breed confidence.

What’s your working life like and what are you working on now?  What question should I be mortified that I neglected to ask you?

Working life right now is a little odd because I’ve just finished my book tour, but I need to take a little break before jumping back into my next novel. In the spring, I mapped out the next book, and wrote the first twelve pages before pre-publication madness for The Embers forced me to put everything on hold. But I’m really excited about it, and am dying to jump back in. So, just a short break to get my brain ready for fiction again, and then I’ll disappear into that. In terms of my working life, though, I usually write about five hours a day in my office, which is just down the street from my home. My goal is two double-spaced pages a day, and I usually do around that amount. I’m not a very fast writer unfortunately. And I love editing. And I can’t imagine any question you should be mortified for not asking!