Read this Book: Bird in Hand 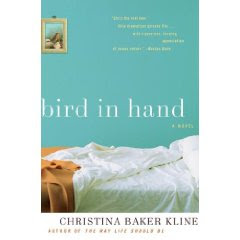 Bird In Hand by Christina Baker Kline is one of those books that I have been carrying round with me and urging everyone on the planet to read. It's a knockout, about love, lies, and the choices we make that can change a life instantly and irrevocably. Plus, how can I not adore another writer who also is phobic about driving and accidents?

Bird in Hand took you eight years to write. What was your initial inspiration? What kept you going through such a long process? Did the novel change over the years?

The story of Bird in Hand emerged slowly, from a number of sources. I’ve always thought of this creative process as akin to sand rubbing against other detritus inside an oyster shell, eventually creating a pearl. (Though I recently learned that this theory of pearl formation is apocryphal, I still like the idea.) Here are a few I can identify:

Though Alison is portrayed, in some respects, as the victim of Charlie and Claire's affair, you are also very careful to show us Claire's side of the story, and Charlie's, too. Was that difficult for you to do? Did you find yourself siding with one character over another?

It was exhilarating to move from one character to another in this novel. I loved all of them equally. Flaubert famously said, of the vain, shallow, adulterous heroine of his most famous novel, “Madame Bovary, c’est moi” – and that’s exactly how I felt with these characters. I found that I sided with each as I wrote from that character’s perspective. It made perfect sense to me, writing as Claire, that she was entitled to Charlie’s love. I understood Ben’s ironic distance and distraction. I empathized with Charlie’s restlessness and yearning. And though Alison’s perspective begins and ends the novel, I always thought that the other characters were equally entitled to their points of view.

Your personal experiences could inform pieces of both Alison and Claire: you are a writer like Claire; you re a mother like Alison. How, if at all, did you use your own life in creating all four characters?

One of the many joys of writing fiction is the alchemy of it. I love that bits and pieces of my own experience, my thoughts and feelings, overheard conversations, friends’ stories, movies, TV shows, and other books work their way in, often without my consciously realizing it. Grace Paley once said, “It is the responsibility of writers to listen to gossip and pass it on. It is the way all storytellers learn about life.” But to answer the question: I used my own life in many ways in this novel. I think that these four characters are all me, and they’re all my husband, David. They’re also lots of other people I’ve met. And no one at all. I felt like an actor (or perhaps several actors) writing this book: I truly inhabited these characters. I became them as I wrote.

Part of what makes this novel so compelling is the thought that any of this could happen to any of us. The details that make up this novel feel very real. How did you make this happen?

The accident scene gave me a lot of grief. I consulted with police officers, a passel of lawyers, and finally with a Vice President of Public Relations at Liberty Mutual Insurance Company, who patiently explained the intricacies of New Jersey laws and liabilities. Several times I was tempted to cut that opening altogether: I worried that it tilted the book too heavily toward Alison, that it formed a cloud that she couldn’t get out from under. But ultimately I think it is a crucial part of the story, propelling everyone toward the kind of seismic change that might not otherwise have happened. In a larger sense, I wanted to convey the idea that mundane and seemingly trivial details comprise the bulk of our existence. These details make us who we are.

Bird in Hand can be seen as a criticism of romanticizing modern marriage. And yet the ending isn't necessarily sad. Do you feel that each of the characters made the right choice? Or just made a choice?

In real life, I am something of a romantic – and happily married! But I also know that marriage is hard, even under the best of circumstances. In this novel I wanted to show what’s hard about marriage; I wanted to explore characters who can’t quite figure out how to communicate with each other. I wanted to follow them to all the dark and elusive places. Truly, I don’t think Alison and Ben had much of a choice in any of it. But I suppose I believe that for Alison to live the rest of her married life with someone who isn’t in love with her would be sad and pathetic.It’s better to know it now, while she’s young and has a chance for a rich, happy family life with someone else. Charlie’s decision may have been just the impetus she needs to find out what she really wants. And Ben? Maybe he’ll get that baby after all.

I love teaching at Fordham, where I’m Writer-in-Residence. And I’m working on a new novel, tentatively called Orphan Train. This is the first of my novels that involves an actual historical event and lots of research, which is both exciting and daunting. I’ve started a blog, which is exciting and fun to work on, about the experience of writing this novel – it’s about craft and discipline and the creative process. It’s called A Writing Year: Ideas and Inspiration for Writing a Novel, and you can find it at (http://christinabakerkline.wordpress.com/).

Caroline, thanks for this interview. I'm looking forward to reading BIRD IN HAND.

Christina, that's a wonderful Grace Paley quote! I'm loving your blog and am looking forward to your Orphan Train book too.

I could write a novel BUT I'd
hav-ta live to be one hundred fifty to ever ït edited.