I Shall Scream (with apologies to Oliver) 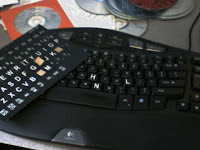 I seem to have some sort of acid in my fingers which destroys the letters of my keyboards in three months' time. I've tried different keyboards, putting clear nail polish on (messy and didn't work), and even bought one of those odd key condoms--a rubber sheet which tightly fits over the keys, which collected dust and drove me crazy. I tried press on letters (they faded.) I finally found a company that insists its press on-letters (see photo above) won't fade. Other than that, there is the (pictured above) Japanese keyboards in soft leather AND NO LETTERS AT ALL.

I also heard that laser etched keyboards might work.

Sigh...If anyone has a workable solution, you can get a watercolor of a ladder flying in the sky.
Posted by Caroline at 8:49 AM

Go get an apple keyboard...the new one's... they're metal! they work with PCs and are virtually indestructible.

Unless you have that acid blood stuff like the monster in Alien you should fair better.

Ok... hmmm .. I have the quetion out to my tech geek friends... I WANT THAT WATERCOLOR!

I love the idea of a leather keyboard. But no letters at all? How well do you touch type? H....

Have you tried spraying a new keyboard with a matte finish fixative used for artwork, from an art supply store? My writer husband has this same problem but since he also destroys laptops eight other ways by the time the letters have vanished he is on the verge of a new machine altogether, so I haven't tried it. His newest book, out in November, is a monster (Le Corbusier, Knopf, 864 pages in the finished book), and I think he may have gone through six laptops in the course of the eight years he spent writing it.

Katharine, that's an excellent suggestion, I'm going to try it.

I thought I was the only one who did that! My skin is very alkaline which makes it stay young but removes paint and cleans all jewelry. I can also work with cooked tomatos all day and not blister.
Fortunately I am a touch typist.

Dear CarolineLeavittville,
I believe you must be talking about a laptop keyboard.

There are three solutions:

2) Name brand laptop manufacturers do make and sell replacement keyboards. When the keyboard wore out on my beloved Dell Latitude C610, it would have cost half the price of a new laptop (say $350) to replace the keyboard alone.

3) If your laptop uses Windows XP OS, and you have a firm tabletop/desktop work surface, then get the Logitech ALTO portable notebook stand with integrated keyboard.

If you want to tote or lug or pack your backpack, to the coffee house on the corner, or to an internet cafe in Leiden, The Netherlands, #3 won't work.

If you can spare your computer for a few days, you might be able to buy the same version on eBay, one that's being sold cheaply for parts, and persuade a neighborhood tech geek to take it apart for the keyboard, and install that keyboard in yours.

Touch typing only goes so far.

I wiped a desk top keyboard clean of letters. Hubby is still screaming as he hunts and pecks. Replacement keyboards for my dell laptop run under 20.00. The cat keeps removing the keys so I have a lot of experience replacing them.

Why don't you try wearing thin gloves while you are typing?