Love and Endurance on the eve of the Spanish-American War. Brilliant novelist Marisel Vera talks about her astonishing THE TASTE OF SUGAR 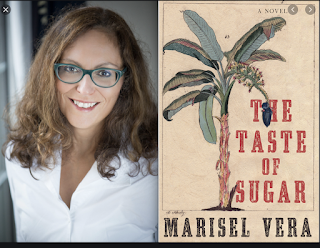 Marisel Vera does what the best writers do: she puts you into another world and then makes you see this world differently. Her just published novel THE TASTE OF SUGAR is a gorgeous, heartbreaking saga of a Puerto Rican family suffering under Spanish oppression on the eve of the Spanish-American War--and it is a stunner. She's the author of If I Bring You Roses and she won the Willow Review literary magazine’s fiction prize for two of her short stories in 2000 (The Liberation of Carmela Lopez) and 2003 (Shoes for Cuba).

When I first started The Taste of Sugar, I was so entranced, I couldn't stop reading.  And I'm not the only one offering high praise.

"The novel’s deeply felt mixture of the characters’ sorrow and joy offers a vibrant glimpse of the history of Puerto Ricans in Hawaii." -Publisher's weekly

“Subtle yet arresting, The Taste of Sugar, is a gorgeous feat of storytelling.  Marisel Vera melds meticulous research with deep compassion and pure talent to fashion a novel that excavates the pain of the history while drawing hope from the buried stories of our nation.  This is historical fiction as its best, using the moral dilemmas of the past to decipher our present conflicts in order to light our way toward a more just future.” —Tayari Jones, author of An American Marriage

“A majestic work with the grand sweep of history and the intimacy of a compelling dream. Marisel Vera has written a compassionate, unforgettable, richly detailed novel about colonialism in all its guises, offering us little-known stories from the past that are essential to understanding the present.”
—Cristina Garcia, author of Dreaming in Cuban

“In The Taste of Sugar, Vera adds an important contribution to Puerto Rican literature by chronicling the U.S. invasion of Puerto Rico, the San Ciriaco hurricane, and the mass migration to Hawaii. Throughout, Vera captures the “trabajo y tristeza” of the Puerto Rican people. Brava to Marisel Vera for telling our stories!”
—Ivelisse Rodriguez, author of Love War Stories

I am thrilled to have Marisel here. Thank you so much, Marisel!

What haunted you into writing The Taste of Sugar?
I was conducting research for If I Bring You Roses, my first novel, when I stumbled on the fact that over 5000 Puerto Ricans left the island to work in the Hawaiian sugar plantations. Worrying whether they’d been able to return to Puerto Rico and to the loved ones they had left behind haunted me. Even nowadays, unless you live on the West coast, it’s still a long journey to Hawai’i. Imagine making that journey in 1900. I was also haunted by how terrible the conditions in Puerto Rico must have been that these families were willing to work in, what to them might have seemed, the other side of the world. Some of the Puerto Ricans who made the journey came from coffee country up in Utuado. My great-grandfather was a coffee farmer in Utuado during this same period. One of his sons was my beloved maternal grandfather Vicente, who was also a farmer. I named my male protagonist after him. I like to set my characters in places where my family is from because as I discover details for my story, I also learn about how life must have been for my ancestors. What can be better than that? This is why my characters Valentina Sánchez and Vicente Vega have a small coffee farm in Utuado.

Some of the circumstances that led to the exodus in 1900 could be traced to the colonization of Puerto Rico—first by Spain and then the United States. During the Spanish-American War, the U.S. invaded Puerto Rico and Spain surrendered the island as war booty. Puerto Rico was then under a U.S. military government that instituted many changes including devaluing the silver peso which raised the cost of living for an already poor people, and implementing new taxes, including import/export tariffs that cut off foreign markets for Puerto Rican products. Then, as now, Puerto Rico must import most of its food and now it cost twice as much.  As if this weren’t bad enough, in 1899, less than a year after Puerto Ricans became American colonial subjects, San Ciriaco, a fierce hurricane eerily similar to 2017’s Hurricane Maria, destroyed much of the island including coffee country where my protagonists live. Over three thousand Puerto Ricans lost their lives and thousands lost their livelihoods and went hungry.

In The Taste of Sugar you create complex little known worlds with many characters. How do you do this, why do you think it’s necessary, and how do you go about learning about these worlds?

That’s exactly the reason why I create these worlds in my work because they are worlds little known to most readers.  I hope that I can entice you to share my love of Puerto Rico, Puerto Ricans, and the Puerto Rican culture, and, if you already share it, to rejoice in reading about it. I am fascinated by Puerto Rican history because all that I learned as a student in Chicago’s public school system was that Puerto Rico was a “Commonwealth,” the term that the U.S. government used instead of Colony. My mother, who was an outstanding student in Puerto Rico, told me that all her schoolbooks were in English despite the fact that all her teachers were Puerto Ricans with little knowledge of English! The history in her schoolbooks was American history! As I was writing The Taste of Sugar, I would call Mami to share fascinating facts I learned about Puerto Rico. She was always so interested. I wish my mother were still alive so that I could share The Taste of Sugar with her.

Why did you decide to tell the story in two voices—both female and male?
Often, I find that the voices of women are secondary to that of men. I have personally found this to be very true in the Puerto Rican culture. I was taught by both my father and my mother to listen to men and to my elders; I could never contradict them. I was not permitted to speak until I was given permission to speak. (Yes, Caroline! This is true!) I think that is why I became a rebel and a feminist from a very early age. When I write, I stand up for that girl, the young Marisel, who was forced to stay quiet, eyes lowered to show respect. My women will fight the patriarchy. But I also want to write about Puerto Rican men, men like my father and grandfather. I want to tell their stories and how colonialism beat them down again and again, but they kept getting up and kept fighting.

What is your biggest challenge when you write?

Structure! I begin writing with a vague idea about what the book will be about. No characters, no plot.

Maybe because I began with poetry, I always start writing something new with paper and pen. I start thinking about who can best tell the story and, once I know her name, I hear her voice. Sometimes, an unnamed character will speak to me and I’ll write everything down, like in a trance. Eventually, I figure out who is talking. When I hold the pen in my hands, I can feel the words rushing down my arm to my fingers holding the pen. I’ll write pages or maybe even a chapter before I switch to my computer. My characters take me on their journeys. It’s a thrilling chaos!

What is your favorite thing about writing?
Rewriting! I write many drafts because I want to get every word exactly right, because I want the language to be as beautiful as I can make it. It’s also in rewriting that I truly get to know my characters and what my novel is about. In The Taste of Sugar, I learned something new about Valentina in my very last draft!

What are you obsessing about now?

It’s always something about Puerto Ricans. (I’m working on a play and a new novel.)

Is there a question I didn’t ask?
Did I want to write about San Ciriaco to make a connection to Hurricane Maria? No, because I began working on The Taste of Sugar in 2012, years before Hurricane Maria.

Thank you, Caroline, for hosting me on your blog!