On the Nothing is Cancelled Book Tour, Brooke Lea Foster talks about SUMMER DARLINGS 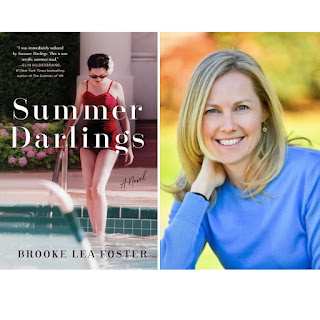 In some ways, Summer Darlings is my love letter to Martha's Vineyard, and it's so ironic that the pandemic will keep me from getting there this summer since my book takes place there.

Set in the splendid summer days of the 1960s, Wellesley scholarship student Heddy Winsome leaves her hardscrabble Brooklyn upbringing to nanny for one of the wealthiest families on Martha's Vineyard. But no one she meets on the summer island -- socialite, starlet or housekeeper -- is as picture-perfect as they seem, and she quickly learns that the right last name and a house in a tony zip code may guarantee privilege, but that rarely equals happiness.

I've been a journalist for over twenty years, and I've always dreamed of writing a novel. I spend time in bookstores the way athletic people live at gyms. I've always wanted to write a summer book, too -- the kind of novel that people devour while on vacation, probably on a beach, because it transports them to a glamorous setting and thrusts them into the lives of fascinating characters. Those are the kinds of books I love. A few summers ago, while I was on vacation on Martha's Vineyard, where we spend two weeks every August, I read about these two mansions on a narrow spit of land in Vineyard Haven; in between the houses was a rustic fishing cottage, at least back in the 1950s. Today, that "rustic" fishing cottage rents for $14,000 a week. I immediately began to visualize a WASPY family in one mansion, a movie star in another, and a handsome surfer in between. I knew right away that a young woman would arrive, an outsider, a scholarship student, and she'd nanny for the WASPY family but develop a friendship with the movie star and a crush on the surfer. I knew that the longer she was on the island she would begin to peel back the curtain on the people she met and she'd be forced to reckon with the dark underbelly of privilege.

I figured the idea would fade once I got home from the vacation, but then the characters voices began to emerge. I looked at my husband one night and said: "I have to write this story." I just had to write Summer Darlings; I couldn't rest until I was finished.

There are so many summer books I'm dying to read next: @Jamiebrennerwrites Summer Longing, Nathalie Jenner's The Jane Austen Society, and Susie Orman Schnall's We Came Here to Shine -- and if I can make it to Martha's Vineyard this summer, I'll pick them up at Bunch of Grapes bookshop in Vineyard Haven.
Posted by Caroline at 11:57 AM

LOVE SPELL CASTER (DR. GBOJIE) THAT HELPED ME BRING BACK MY DIVORCE HUSBAND CONTACT HIM NOW FOR ANY KIND OF HELP

With so much in my heart i am here to express myself on how Dr. GBOJIE saved my marriage from divorce. Myself and my husband were having some misunderstanding and it was tearing our marriage apart to the extend my husband was seeking for a divorce. So i have no option than to go to the internet to seek for solution to my problem it was there i came across Dr. GBOJIE details and about how he has helped a lot of people by restoring there relationship. I contact Dr.GBOJIE and in less than 48 hours my husband cancelled the divorce papers. Now myself and my husband live together in peace and harmony all thanks to Dr.GBOJIE for saving my marriage from breaking up. Dr. GBOJIE contact information are via email: gbojiespiritualtemple@yahoo.com , gbojiespiritualtemple@gmail.com or call his phone number or WhatsApp: +2349066410185 .or check out his website :http://gbojiespiritualtemple.website2.me