It's not just Annie Lamott telling you to read this gorgeous heartbreaking and healing memoir, Janine Urbaniak Reid's THE OPPOSITE OF CERTAINTY, it's me, too! About raising a boy who becomes mysteriously ill, about hope, and faith, and so much more. 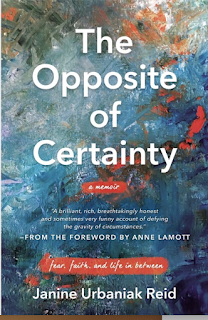 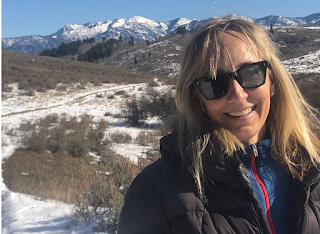 When Anne Lamott tells me I have to read something, I always do. And I fell in love with Janine Urbaniak Reid's fierce and moving memoir, which had me holding my breath. She's been published in the Washington Post, Chicago Tribune, San Francisco Chronicle, and widely syndicated. Hoping to bring humanity into the healthcare discussion by sharing her experience as a mother of son with a brain tumor, she penned a piece for the Post which went viral. She has been interviewed on national news networks, and continues her work as a spokeswoman for healthcare justice.

I'm thrilled to host her here. And honored to know you, Janine!

I always ask writers what was haunting them into writing their book? What did you expect to learn or to be changed by, and what happened instead?

I was driven to understand what had happened to me and the people I love the most. What did it all mean? I wanted to fit all the pieces together and figure it out, as if understanding might give me mastery over an out-of-control life. I was also trying to find me again after having my life distilled into the role of Mother, then Desperate Mother, always with a side of wife, friend and sober woman. But who was I anyway, and did I just lose or find me?
Sifting through each draft was its own kind of awakening. My first editor wrote “what did you feel?” in the margins over and over. So I went through the manuscript estimating what a woman might feel in these situations. My reflex was to fill in the blank as if I’d missed something living the experience. Then I realized that not feeling was the point. The numbness was as real as rage. There are times you are forced to tuck away feelings because you have to. This spoke to the strange advantage of growing up in alcoholism and my aptitude at burying terror like nuclear waste. Now that was interesting. The threads started coming together.
Ultimately I wasn’t able to tame the uncertainty. But it turned out that I could survive what was real and true, without pretending to be better, smarter or more spiritually evolved. What changed – of course – was me. I came out of this story with my own body scarred, stronger but softer, more filled with faith and less ruled by should-s, knowing less about God but believing more.

This astonishing story, of how your little boy became mysteriously ill, and how you both traveled this journey and changed from it had me gripped on every page. Was writing it difficult, as in reliving it—Or was there a kind of grace in putting down what happened, all the while knowing that things worked out?

I often wondered why I thought writing this book was a good idea. It was emotional. But the story had to come through me and out of me. I had the chance to feel the things – like the terror and grief – that weren’t safe to feel at the time. That wasn’t fun, but necessary. There were also threads of grace that I’d been too busy or exhausted to really see; the synchronicity of people who showed up just when we needed them; the wherewithal of my closest friends and my divorced and re-partnered parents; the random but unforgettable people who arrived for just one critical moment.
I was still living the story while I was writing. Many days the reality outside my little writing cave, was difficult. So I was experiencing a version of the story in real time, wondering what it meant to the ending that I really wanted for our family, the one I’d been propelling us towards chapter by chapter.
I painted a lot while writing too, mixing the colors and moving the paint helped get out the parts of the story that didn’t neatly fit into words. I wrote better when I was painting. That’s one of my paintings on the cover.

So much of this extraordinary book is also about your faith and how it changed. What stopped me was that your son might have had this brain tumor all his life and then it shows itself, which is a lot like things that happen in life.

Like a lot of things in life: we anticipate and prepare, sure we know what’s true, what we’re protecting ourselves from, then there’s a tremor, a hint of something just outside our line of sight. No one really knows what’s next. It’s a vulnerability that -- until just a few months ago -- many of us could successfully tuck away and often ignore. As a young mother, I struggled to control more than was actually possible. My hope was that if I navigated exactly right and checked the correct boxes my kids would be okay – then I could be okay. I thought I had a profound faith. But I still thought faith was something I had, like a AAA card. It was a hedge against the limitations of my self-will.
There was this illusion that I could shape the circumstances of my life if I had enough faith or the right kind. Maybe the tumor would go away. I gripped so tightly because I was holding out for a miracle I could recognize. What I got was grace that paints in the abstract. The paint by numbers landscape of my life turned into a Jackson Pollock masterpiece. Miracles hidden in the messiness of the experience. Turns out prayer isn’t about controlling my circumstances. It’s about accessing strength and love, bolder and more magnificent than my limited creativity would’ve allowed.
I had to stop putting limits on God, and concede that, on this side of the sky, I am not going to understand why painful, awful things happen. But I can start to notice how I’m cared for in impossible situations.

One of the things I love best in the world is that people who are loving sharing their loving friends with the people they love, which is what Annie Lamott did for me by introducing us.  I believe this is something we should all pay forward, don’t you?

You were one of the first outside of my closest family and friends to read the finished book. I cried when I received your email. You got it. You shared your story with me. That’s meaning, truth and connection. It’s what I long for in this world where I can still feel isolated despite social media and Zoom gatherings. It’s that, “I see you.” Every day it’s up to me to offer that to someone else, especially people -  like us – who are moved to share their vulnerabilities. It’s something I can do when circumstances inside and outside of my house are overwhelming. I might not have the power to change the big picture, but I can practice being present for others, and do what I can to help someone else.
I was moved by the story of your marriage, how it became weathered by impending tragedy, and in a way tenderized by it, too, giving it more substance. There is one place where Annie says, “Don’t worry, I’m not going to say something hostile like God doesn’t give you more than you can handle.” We are always given things we cannot handle, but do you think handling them is the point?

Well yes and no. There’s no family without showing up, following through, and pushing past self-imposed limits. But I believe that asking for help is really the point. It’s an antidote to the loneliness that lives inside like a dormant virus. The most alone I’ve felt as an adult is being married yet alienated from my partner. Alan is one of my biggest teachers because he holds a mirror for me on the days I’d rather not see my reflection. It’s my job to heal what causes me to cringe. This is true in all of my relationships. And there are plenty of times that ending a relationship is the right thing to do. But marriage means you can’t leave so easily. It’s forced me to address what keeps me from being fully present, those places in myself that are afraid, judgmental and withholding. And we wouldn’t still be married if Alan wasn’t continuing to do his work too. We’ve considered giving up, but so far there’s a grace that shows up for us and through us, a grudging compassion and we move into the next day as a couple, and there’s something beautiful in this.


What advice would you give someone grappling with the unknown, which is really every freaking minute in life? Do you find that despite all of this, your faith is even stronger


Whatever you’re feeling right now is okay. I believe gratitude is a gateway to a better attitude. Yet I still need to speak my scared, petty, if-you-only-knew thoughts aloud to someone who won’t hold them against me. Saying what’s true clears a channel, and enables gratitude to take hold. So we start on a foundation of what’s real, and the loving nod of a friend who gets it. I will never tell you not to be afraid, but I might point out that you’ve done hard before.
I am often afraid and unsure, but this might be what courage feels like. I always thought that if I had the right kind of faith I’d meet uncertainty with the kind of enthusiasm some people bring to extreme roller coasters. That’s not me. And it comes back to the inspiration for the title The Opposite of Certainty. Paul Tilith said, “Doubt is not the opposite of faith, it is one element of faith. And Anne Lamott’s take on that, “The opposite of faith isn’t doubt but certainty.”
Faith looks like not giving up today. And my faith is stronger after everything I’ve been through, more a muscle than an idea.
What’s obsessing you now and why?

At this very moment I am thinking I should be getting more done, thinking more clearly, not as affected as a I am by the global pandemic, as if finished essays and clean bathrooms would shore me up in some way. Mason is in the midst of drug treatment for recent tumor growth. We’re all dealing with the pandemic on top of everything else. I channel my powerlessness into fortification, my 21 century version of hunter gatherer. We now have three kitchen drawers devoted to supplements. There is plenty of Vitamin D, C and zinc. It’s something I can do.

What’s it like to realize your lifelong dream of publishing a book during a global pandemic?

Alan asked if I’m excited, and I remembered that anxious and excited live very close on the emotional number line. I tried to take a wise author photo to show you what a smart and thoughtful book I’d written, but I couldn’t do it. It was like telling a five-year-old not to smile at Disneyland. It’s a can-you-believe-it photo. I try not to worry about the timing (but really I worry about most things) because maybe my story will resonate and help, especially now. It’s life – all these feelings, all these experiences the full range of shades and colors all at once.