A woman who has the power to change the weather, what it means to fit in, and more. Cai Emmons talks about her dazzling new novel WEATHER WOMAN 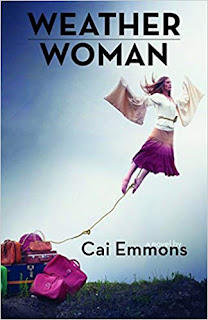 To say I loved Weather Woman is an understatement. Full of amazing science, and even more amazing characters, it's the kind of book you want to press into the hands of everyone you meet because you need them to read it so you all can obsess and talk about it.

Cai Emmons is the author of the novels His Mother’s Son (Harcourt) and The Stylist (HarperCollins). His Mother’s Son received starred reviews from Kirkus and Publisher’s Weekly, was a Booksense and Literary Guild selection, was translated into French and German, was reviewed by O Magazine and The Economist, and won an Oregon Book Award (the Ken Kesey Award) for fiction.

Her wonder-filled latest, Weather Woman, is the story of meteorologist Bronwyn Artair who discovers she has the power to change the weather. I am so thrilled to have Cai here. Thank you, Cai!

I was gobsmacked by your novel, by your insistent merging of both science and wonder. What was haunting you that led you to write this book? Why now?

Since I was a young child I’ve been fixated on the weather, extreme weather in particular. Weather seemed to speak to and through my body. Sometimes, I really wanted the weather to be different—on cold and rainy Halloween nights for example—and sometimes I even imagined I might change the weather if I concentrated hard enough. When I became a writer, it was a natural outgrowth of this obsession to create a character who really could alter the weather. This idea started to really press on my consciousness over the recent years of extreme weather events.

Where did you get your obvious love of weather? Did you research? What surprised you in your research? What did you learn about the intricacies of the brain? And is it true that a cubic foot of air carries enough energy to boil all the oceans of the world?

I love reading about science and often regret that I didn’t study more science in school. When I realized that this book would require delving deeply into meteorology and physics I was both excited and daunted. A book that I’d read earlier called The Intention Experiment became my springboard in thinking about the enormous untapped energy of the human brain/mind. The official research began with a “Great Courses” class about meteorology, 24 lectures by UCLA professor Robert Fovell, covering clouds, wind, tornadoes, cyclones, hurricanes, etc. Though it was supposedly an introductory class, much of it was beyond me, but I did my best. I read various other books about extreme weather and climate change and physics and neuroscience. One of my favorite books was The Cloud Collector’s Handbook, by Gavin Pretor-Pinney. I am still drawn to these books, still wanting to understand more about the mysteries of the universe. And, of course, the more you read the more questions arise.

My research brought me to many startling facts about the capabilities of animals: some bears can smell food 18 miles away; moths have the best sense of hearing (better than humans); some bacteria use a magnetic navigation system; frigate birds, who spend weeks at a time in flight, sleep while they are flying (sometimes using only one brain hemisphere). Such factoids wowed me, particularly in terms of how we tend to underestimate the natural world around us.

Esteemed physicist Richard Feynman is credited in some places on the Internet with having said that a cubic foot of air carries enough energy to boil all the oceans of the world. Like you, I was blown away by that idea, and I’ve been trying to corroborate it. It turns out not to be quite right (though it’s true that a great deal of energy can be contained in a very small space). John Toner, my go-to physics friend who researches flocking and is a professor at the University of Oregon, says:

“A cubic foot of air at normal atmospheric temperature and pressure weighs about 30 g (roughly one ounce). Using that most famous of physics formulae E=mc2 implies that if you could somehow convert all of that mass into energy, you'd get three thousand trillion Joules, or about one billion kilowatt hours, or about 3/4 of a megaton, of energy. That's a pretty big bang, but only enough to boil a cube of water about half a mile on a side. You would actually have to convert a volume of air about two miles on a side into energy to get enough to boil all of the oceans.”

My final takeaway from most of the reading I did is that every living thing and every human action is made possible by an expression of energy at the atomic level. Even human thought is facilitated by energy and creates energy. From that idea I was able to imagine myself into Bronwyn’s power.

What moved me so deeply was the way you wrote about how none of us are alone, none of us should be alone, and we should all be connected to the earth. Can you talk about that please?

I think about this subject a lot. As individuals we so easily become wrapped up in our heads, our unique experiences and problems. Our culture encourages us to individuate and distinguish ourselves from others, but human beings are fundamentally social creatures, and when you look at the cultures that are deemed by anthropologists and sociologists to be most happy, they are the ones in which there is a strong sense of community. Isolation from others—in the sparsely populated state of Wyoming, for example, or among some elderly people—is strongly associated with depression and suicide. We need each other, even those of us who are introverts. And being with other people tends to make us happy.

Bronwyn’s power originates with her strong attunement to the Earth. She notices the Earth and respects it. Near the end of the novel she discovers something she has been sensing all along—that she can’t save the Earth alone, even with her incredible sensibility and power. She needs the assistance and support of others. Whatever she does must be done in community—something the Arctic fox tries to convey to her.

I love the love story between Bronwyn and Matt, two souls who don’t quite fit in the regular world, but who seem to me to be the kind of people our world needs more of. Could you talk about this please?

I liked writing about Bronwyn and Matt because they are both capable people who are always underestimating themselves. I have always been drawn to humble people, and I agree that there are too few of these people in the world. Matt hates himself for using his journalistic skills to fabricate untruths, and Bronwyn hates herself for being from lowly circumstances and not being able to withstand the rigors of academic science. But they are both able to unearth the shining light in each other.

So much of this wonderful read is about the way we perceive, and how we control those perceptions.  At one point, a character says, “There’s always someone trying to normalize you,” which, I think, is unfortunately true. How can a person who is a square peg celebrate that?

Oh my god, how true this is! I think women, in particular, are susceptible to feeling they should be different: more sociable, more pleasing to others, more willing to take whatever job is offered them. Understanding that it’s okay to be who you naturally are and actually feeling it’s okay to be that person are often at odds. It has taken me decades to fully accept that I can be both outwardly expressive and “big” and also sometimes be a hermit. Assertion and the passage of time help in healing this disjuncture.

Bronwyn undergoes a big moment of self-acceptance when she defies her mentor and states unequivocally that she can do what her mentor believes is impossible. Once she has crossed that line, she can’t ever fully return to her retreating earlier self.

Your use of language was also wonderful. “Bouyant as a dust kitty,”  for example. Where did you get your love of language from? And for you, does the language come first or the story, or are they interchangeable?

I have loved language since I was quite young. When I was eight I began writing poetry. Much of it was nonsensical wordplay, stemming from my love of the sounds and rhythms words could make. That pleasure in words has never faded, but when I’m thinking about a novel it is usually catalyzed by some kind of what if…? What if I (or someone else) really could change the weather? That was the question that became the germ of Weather Woman. I love the extrapolation that begins to play out from posing such a question.

I am always thinking about the stories of women, what it means for a person to be born into a female body. I’m a relatively short woman, and in crowds I often feel claustrophobic and in danger of being stepped on. I recently started wondering how things would be different if women were generally taller and bigger and physically stronger than men while all else remained the same. This is not the premise of the novel I’m currently working on, but the novel touches on a similar obsession.

Perhaps a question about the relationship between Bronwyn and Diane. When I came to the end of the novel I found myself feeling a lot of sympathy towards Diane and interest in how their relationship would play out. I was curious about how much she could change. I answered this question by writing a sequel—something I never, ever expected to do, but once I began it tumbled out. Sinking Islands is the title.
1