How do you get to be a writer/actor/dancer/performer all at once? The amazing Tom Frueh tells all! 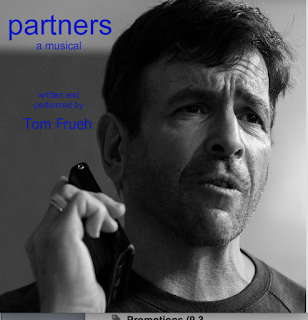 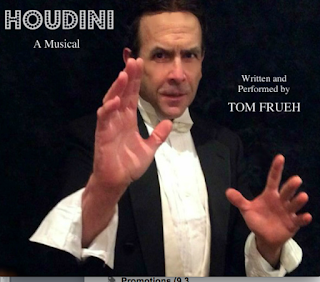 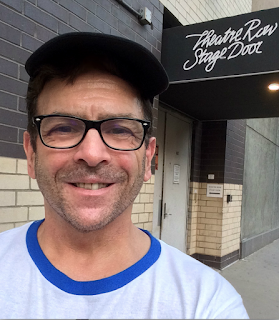 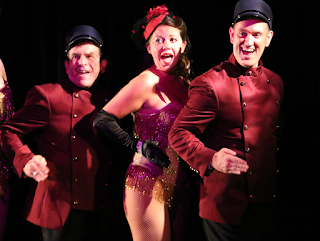 TOM FRUEH is a writer and actor who performs regularly in musicals, including his own one-man musicals for which he also writes the music, book and lyrics. His newest musical Partners recently had its world premiere on Theatre Row at the United Solo Theatre Festival, the world's largest festival devoted to solo theatre. Prior to that, his musical Houdini was produced there. He is also the author of numerous plays which have been performed in New York. A singer-dancer and veteran musical theatre performer, some of his other recent appearances include the musicals On the Twentieth Century, City of Angels, Hairspray, Grand Hotel, The Drowsy Chaperone and Cabaret.

Way, way back, when I lived in the city that shall not be named because I hated it so much, I studied ballet, and quickly became friends with Tom Frueh, who was funny, sarcastic, and as passionate about the arts as I was. Tom moved to Manhattan, and I followed his lead a few years later, and we’ve stayed friends. I’ve been to his plays and have been amazed. I’ve watched his solo shows with delight. And I wanted to interview him because he has so much to say about creativity.

Thank you so much Tom!

I’m so deeply interested in hearing you talk about your one-man musical shows and how they came to be, especially since they’re a bit like a novel.
Like Lily Tomlin and many other performers and writers, I was heavily influenced by an actress who was also a writer, Ruth Draper. As a young woman, she wrote some monologues for herself but then didn’t know what to do with them. She showed them to the author Henry James and asked his advice. He replied, “My dear young friend, you have woven yourself a magic carpet - stand on it!”
Draper’s career was perfecting these monodramas, and in performing them, she could display not only her writing and acting skills, but her amazing understanding and empathy for human beings at all levels of society, from a poor Scottish immigrant to a wealthy Manhattan dilettante and all sorts of people in between (she was also great with dialects).
In a way, these monodramas were not unlike a novelist reading aloud from his or her own work, although there happens to be simple staging and props and lighting thrown in! And like reading from a novel, it’s storytelling in a more personal oral form. And that’s very similar to how I feel about my one-person shows (whereas when I do another author’s musical with a big cast, like On the Twentieth Century which I just finished, it’s something very different. Both are theatre, both are thrilling, but the solo show is a very writerly and a more personal journey and experience.)
What’s your process like?

There’s a very close link between creating a character for a book or play and creating a character one is going to play onstage. For me, the processes are essentially the same, as are the research aspects.  Non-theatre writers try to explore (and sometimes even experience first-hand) what their characters might have experienced, and certainly that’s a common practice for acting. So, in the case of my one-man shows, there’s that kind of research and discovery and character building, and then I try and find the right structure for the story. Acting is the last layer and an outgrowth of all that came before. Also, the acting piece can inform any rewriting. Often, I’ll find that a character I’ve written on the page seems to have his or her own distinct voice, but then I learn through speaking it and acting it that it was too infused with my own voice, so I go back and work to correct that.
The fact that I started out writing plays and now write musicals is simply a matter of using the music skill to enhance the storytelling. In the case of my most recent solo musical Partners, which is about my life following the death of my partner, Johan Renvall, I never could have fully expressed the grief I felt without music, because I couldn’t talk about it at first – I was too devastated. I simply went to the piano and started playing what I was feeling. And then the words followed, and then words and music started to develop in parallel, and that became the complete picture. But the emotion of doing it was sometimes overwhelming. The support and discipline of my director, Jen Jurek, and my music director, Chris Piro, helped me bring it to performance level yet still allow the emotion to come through honestly, but without letting it overtake me.
You’ve said that your shows came about because of grief, which I find fascinating. Talk about that please.

I don’t even think I was fully aware of that when I started writing my one-man shows, especially since grief was not always the central action in the shows. But grief was the momentous occurrence that made me write in the first place. My first solo show, After the Show with the Man Who Owned Broadway, about the composer and performer George M. Cohan, was written in part as a response to my father’s death, but it was about Cohan fearing his career was over.  I wrote Houdini in response to my mother’s death, but it was about the climax of his career.  Partners is the only one of the three that is explicitly about navigating grief, which can be like wandering alone in total darkness. I wasn’t trying to write for therapy (even though there was some therapeutic value, but the writing process also accentuated the despair) but rather to try and create something beautiful from something horrible, and to make this awful experience “count” for something.  I suppose there’s also an element in each of my solo shows about making art – both for me and the characters – to try and overcome life’s horrors. In my George M. show, he uses music and theatre to please an audience but also his dead father. In my piece about Houdini, he uses his seemingly magical escapes to defy the inevitability of nature, and to express his refusal to be beaten by anything or anyone. And since I dance in musicals and Johan was a dancer with American Ballet Theatre, Partners uses dance as a metaphor for life and for the need to persist despite overwhelming tragedy.
You do so many, many things all at once, and I know you also have a job. How do you manage this balancing act?

Yes, I do have a writing job and it encompasses just about anything one could think of, from all kinds of marketing and advertising writing to scripts and magazine articles. The balancing part is second nature to me now since I’ve been doing it so long, but the effort is so worth it because it’s made me a much better writer than I could have been without it. A few weeks ago, I took my very first figure drawing class thanks to a good friend. I thought I would go in and have an hour or more to leisurely sketch the model. But we only had three minutes and then the model changed poses! It was do or die, with ongoing feedback from the instructor. It was easy to see there was a method to this madness, and it’s much like my daily writing. The discipline of inflexible deadlines, the need to be creative on the spot, often with little information to go on, the necessary economy, and the regular criticism are all part of what any writer must accept, to one degree or another, in order to improve. It’s made me think faster and more efficiently when writing, and the best benefit of all is that it makes almost any tough writing job or problem seem conquerable.  It’s been a blessing, and I’m grateful.
What’s obsessing you now and why?
The urgency to keep writing and performing in musicals for more audiences in more places more often, as well as I possibly can. Piece of cake, right?
What question didn’t I ask that I should have?
“When will we go to an all-night diner in Chelsea again and make mischief, and which one of us will write about it, and why is your last name pronounced ‘free’?”  (Sorry, that’s really three little questions disguised as one big question!)

Learn more about Tom and his projects at tomfruehmusicals.com
Posted by Caroline at 12:49 PM

Many thanks to Gregory D'Agostino for the PARTNERS photography, Johan Renvall for the HOUDINI photography, and Oliver Mayes for the photo from ON THE TWENTIETH CENTURY. (Tom Frueh)