Why do we love celebrities so much? The divine Julie Klam answers all as she talks about her wonderful latest, THE STARS IN OUR EYES 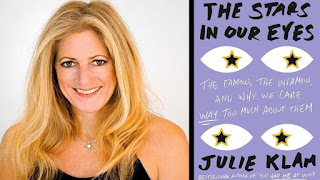 Julie Klam has a bio on her website that is so wonderful, I want to reproduce it here:
Julie Klam grew up in Bedford, New York. Don't be confused if you see that her brother, the author Matthew Klam, says he was born in Katonah, New York. Katonah is in the town of Bedford, and she can call it whatever she wants. After attending NYU's Tisch School of the Arts and interning at Late Night with David Letterman, Julie went on to write for such publications as O: The Oprah Magazine, Rolling Stone, Harper's Bazaar, Glamour, and for the VH1 television show Pop-Up Video, where she earned an Emmy nomination for Outstanding Special Class Writing.  Currently she writes for The New York Times, The Washington Post,  and the magazines that haven't folded.  She lives in New York City with her daughter, her Dan Davenport, and a variety of cute dogs.

Julie's the author of Friendkeeping, Love at First Bark, You Had Me at Woof, and Please Excuse my Daughter, and her latest book The Stars in Our Eyes is so wonderful that you are going to buy up twenty copies just to hand out to any celebrity you might meet!

Thank you so much, Julie. For everything.


So, as someone who once followed Steve Martin around the block until he hid from me—(he’s actually very shy, I’ve heard. Or that’s my explanation, anyway), I devoured your book. What was the “Why Now” moment when you decided to write it? (P.S. I gasped when I saw your had a blurb from Carly Simon.)

I have always wanted to write something about my own love of celebrities but I had never thought it would be a book. When I was getting divorced, I really wanted to write something that was not about me (or me now) and that was how it was born. Because of a confluence of things (related to my divorce) it took me longer to write this book, and it ended up being when a reality tv star became president so it definitely has a different poignancy (if I may) now.

Do you think that living in NYC makes us more celebrity conscious and less apt to hurl ourselves on celebrities? I had a friend who sat next to Anne Meara once and had a whole conversation about the food and even let Anne Meara have a bite—and never once did they talk about her celebrity. I sat beside Margo Martindale once and we spent a half hour talking about my handbag! So my question is, how do we balance our ferocious need to know these people with our devil-may-care attitudes that we are not going to intrude in their lives like everyone else?

I think we pride ourselves on being cool here. I have had those kind of exchanges you are talking about, though I act way more buoyant then with other people. I feel like when you leave a celebrity alone, you’re giving them a gift. Today I was walking home from the gym and passed Samantha Bee walking with her two little kids and you could almost feel her thinking, “please don’t.”

I love that you thought celebrities could save you, but YOU are a celebrity yourself. How does it feel to be on the other side? And are book celebrities less than Hollywood ones? What about animal celebrities, the ones who have zillions of followers on twitter?

I’m not a celebrity, but I recently talked to a famous writer friend about the weird, small world of the famous writer. I don’t mean Stephen King or James Patterson, but like Colson Whitehead and Gary Shteyngart (and just not to name only men, Anne Rice, Liz Gilbert). They aren’t less, they are different. There are very few people who are known by everyone.  And the new breed of internet celebrity, well, they are different than the old kind, because talent isn’t necessarily what made them famous.

You must have had so much fun writing this book. Did you find yourself getting re-obsessed at all? The fun part about writing this book was when I was wasting time reading stupid stories about celebrities, I could pretend I was working!

It’s funny, but the one celebrity I actually know, Al Kooper, from Blood, Sweat & Tears, never once has talked music with me. And it’s better that way. We only talk about movies, so there feels like common ground. And I think readers would want to know, what’s the best way to stalk, um, I mean, approach a celebrity?

I would say feel it out. If there’s a celebrity at an opening you can approach them, if they’re buying Preparation H in Duane Reade, maybe not a good time. I think most people appreciate a brief, ‘your work has meant a great deal to me, thank you’ and move on. I was working for a caterer at a bar mitzvah and Ray Liotta was there and I said, “I don’t want to bother you, but I loved Dominick and Eugene so much.” And he was genuinely happy and asked me my name and then I skittered away.

I also want to ask about the book’s cover, which I absolutely adore.  Since I know that covers are marketing tools, and they can change and change and change, was this the first and only cover? Were there others?

HA HA HA First of all, thank you. I am forgetting now but I think there were 100 covers but I didn’t see any of them, because my publisher, Geoff Kloske, and editor, Jake Morrissey, didn’t think any of them were right. This cover took the longest of any of my covers and I started to wonder if it would ever happen. I actually made suggestions (all involving glitter). When I came in to see it, Geoff threw all the rejects on the table and they were cool, but just not quite right.  And they had this one (though it was sort of dusty rose and I asked if they could make it a different color, because pink books frighten me) and it was like WOW!

Well, my horrible obsession is the news from the government, I need to cap my intake because I go down all of the dark rabbit holes and it’s very easy to despair and wonder if there’s any point to anything when these cruel people are in power. I am also obsessed to finding sandals to go with a new dress.

You should have asked, what do I think of Caroline Leavitt? Well, I think she’s a brilliant writer and a kind supportive friend and I adore her.