Ellen Umansky talks about THE FORTUNATE ONES, thinking you are done writing when you are really not, forgiveness, the Holocaust, and so much more 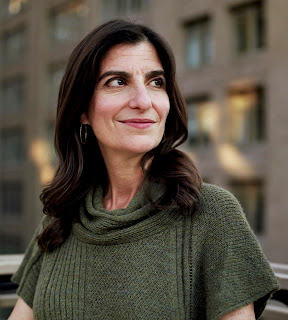 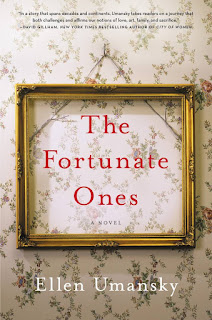 The Fortunate Ones is a truly GREAT novel. I didn't know Ellen Umansky before I read her novel, but halfway through, I knew I had to talk with her--and I'm so delighted I got the chance. She has published fiction and nonfiction in a variety of venues, including the New York Times, Salon, Playboy, and the short-story anthologies Lost Tribe: Jewish Fiction from the Edge and Sleepaway: Writings on Summer Camp. She has worked in the editorial departments of several publications, including the Forward, Tablet, and The New Yorker.

Thank you so much for being here, Ellen.

It’s funny talking about this book in terms of now, since it was such a long time in the making. The seeds of the contemporary story come from something that happened when I was growing up in Los Angeles. We knew a rich ophthalmologist who liked to live large: A house in Beverly Hills, trips on private planes, an enviable art collection. In the early 1990s, his two most valuable paintings, a Picasso and a Monet, were stolen.

Fast forward years later, the police tracked the paintings down to an airport locker in Cleveland. The doctor had set the theft up—to collect the insurance money. I remember my mother faxing me a clip of the story from the L.A. Times—that’s how long ago this was. I kept thinking about it, not only why he’d been driven to do it, but why he did it the way he did, and why he didn’t destroy the paintings. If he had, there wouldn’t have been anything in that Cleveland locker for the police to find.

As for the historical part of the novel: I was working as an editor of the Forward in the late 1990s, when stories of Nazi-pilfered art were coming to the fore. Around then a friend asked me to go with him to an art exhibit of a painter I had never heard of before, Chaim Soutine. I went somewhat reluctantly and was floored.  Talk about being haunted: I couldn’t get Soutine out of my mind.

It’s astonishing to have a debut get so much high praise, including from the New Yorker. Did you expect this? Did you have a feeling? And does this reassure you or make you feel that writing your second novel is going to be like starting all over again?

I had NO idea. I mean, I hoped and fantasized—what writer doesn’t? But I worked on this novel for so long, about 15 years all told, and had so many rejections along the way—there were long stretches in which I doubted it would ever exist in the world. A number of years ago, my agent at the time tried to sell the novel. It didn’t go anywhere, and my agent told me as gently as she could that it was time to put it aside and work on something else. For more than a year I tried. Finally Joanna Hershon, a close friend of mine, an immensely talented writer, and the patron saint of this book, said to me, “I don’t think you’re done. I don’t think this book is over.” And it was entirely because of her faith that I took it out and began working on it again.

I’m so glad it didn’t sell years ago. It’s an entirely different book now, a deeper, more complex story. I certainly hope my next one doesn’t take me another decade and a half, but at the same time the response has been so profoundly gratifying; it is reassuring in all kinds of ways.

The history is so alive that it made me want to know about your research. The author Mary Morris once told me that when you research, you look for stories, not facts, and that’s the way to keep from being overwhelmed. What startled you in your research? What gave rise to story?

That’s such a wise way to put it. I loved doing the research, loved trying to hunt down those stories. They’re hard to come by, but you know them when you see them, and sometimes the smallest detail can open up a world. When I was looking at unpublished memoirs in the archive at the Center for Jewish History, I read something by a Viennese-born woman who mentioned being irate after her parents told her she couldn’t go to the movies anymore. Germany had annexed Austria, SS officers were on the streets, and that’s what she remembered. It was just an aside, but it cracked open Rose’s story for me. It felt true to a child’s experience, because of course you’re not paying attention to what politicians are saying or what the immigration quotas are. You want to go to the movies. You want to go to the same school you’ve always attended. And when you can’t, your life is turned upside down.

The story that haunted me for years was from a documentary on the Kindertransport called Into the Arms of Strangers. The filmmakers interviewed a number of survivors, including Lory Cahn, whose parents had secured a spot for her on a train when she was 14 years old. She was an only child. They took her to the station, she boarded the train, and held her father’s hands through the open train window. Then the train started to pull out. He was so distraught, he literally couldn’t let her go. He tugged her out the window and onto the platform. A few years later, the family was taken to Auschwitz.

The story is so harrowing and painful on every level. It drove home for me how hideous all those separations must have been, the desperation the parents must have felt to put their children on those trains.

Of course, we have to talk about art and what it really means to each of the remarkable women in your novel. Please talk about this.

I always knew I didn’t want it to be a conventionally beautiful piece of art, something that everyone would be dazzled by. I was more interested in what the painting represented emotionally to my characters than its aesthetics. It’s complicated for both women. Rose doesn’t actually even like the painting that much. She’s envious of all the attention her mother lavishes on it. Later, she’s unable to separate the painting from the loss of her parents. It becomes a cover. Rose hates thinking of the past, will do anything to avoid it, but at the same time, she can’t let the painting go.

When Lizzie first moves to L.A., she sees the Bellhop as an outsider, a stranger in her father’s modern house jutting over a canyon in Los Angeles, just as she is an outsider to his house and world. She’s comforted by it, especially when she learns that her mother loved it too. And she too latches on to its loss, feeling if she could just get it back, everything else would be righted in her life.

Both women can be a little closed-off, and I think the painting gives them room emotionally, to privately grieve and fantasize about what might have been. I love Soutine and was so drawn to his work, but you could make the argument that the art is beside the point. Rose and Lizzie could conceivably have felt this way about any object that’s tightly bound up in memories—a watch or a book or a scarf (something else Rose holds dear). Its all they imbue the object with that matters.

So much of your dazzling debut is about who we forgive, what we forgive, and what we can’t and why. Do you think there is ever anything that truly is unforgivable? And what is the cost of that?

That’s a good question. So much of what Rose has to endure—the forced separation from her parents, their murder, the loss of her home and country, is unforgivable. The question becomes how does she cope. I was interested in the long shadow of trauma. How does anyone move on from such devastations? Is it possible to?

It’s interesting to consider forgiveness in terms of Lizzie too; her father did something terrible—not as terrible as murder, of course, but unscrupulous and illegal and he allowed her to believe she was to blame. Does she forgive him in the end? For me, it was less about forgiveness than acceptance. Acceptance feels more attainable. You can choose to move on without forgiving. Lizzie doesn’t have to like what happened, she doesn’t even have to understand it, but I think in the end she accepts it’s the truth, however complicated and ugly it may be.
Rose also has to forgive herself. For most of her life, she can’t accept the circumstances of her survival. She views it as a betrayal. How could she be here when her parents are not? Her struggle is to forgive herself for getting on that train—and to forgive her parents for putting her on it, for leaving them behind. It takes her nearly a lifetime.

Well, I spent the other morning glued to the TV, watching James Comey testify, so I would say that the state of our democracy is obsessing me now. I’ve never been so grateful for our free press and for our judiciary. I never thought too when I was writing about World War II and a family’s desperate attempt to flee—trying to acquire visas and facing tight quotas and indifferent countries that turn them away—that there would be anything particularly relevant about these issues in 2017. But here we are.

Less a question than an explanation: I’m not the same Ellen Umansky who is a professor of Jewish studies at Fairfield University. There are more Umanskys out there than you might think.