J. Courtney Sullivan talks about sisters, faith, secrets and her phenomenal new novel SAINTS FOR ALL OCCASIONS, and gives us all a great poem 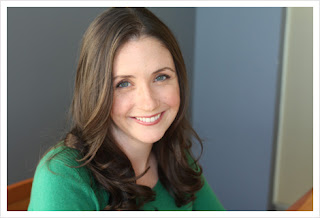 I first met Courtney, along with the great Jenna Blum, at a book fest. The three of us whooped it up, laughed, traded insecurities and mostly talked about working in our pajamas. Come on, how could you not adore someone like that?

Her latest novel Saints for All Occasions is devastating, astonishing, and full of power, about faith, sisters and the secrets and it's a knockout, and everyone in the media thinks so, too. (Just in case you think I am prejudiced about Courtney, which I am.)

She is the author of the New York Times bestselling novels Commencement, Maine and The Engagements. Maine was named a Best Book of the Year by Time magazine, and a Washington Post Notable Book for 2011. The Engagements was one of People Magazine’s Top Ten Books of 2013 and an Irish Times Best Book of the Year. It is soon to be a major motion picture produced by Reese Witherspoon and distributed by Fox 2000, and it will be translated into 17 languages.

I wanted to write about two sisters who follow two very different paths—one takes the more traditional route of marriage and motherhood, the other chooses to live as a cloistered nun—precisely to examine the matter of faith. I think to most of us, the thought of taking vows and committing one’s life fully to God is hard to fathom. But motherhood requires the same degree of commitment up front to something you can’t experience until you’re in the thick of it.

One cloistered nun I spoke to mentioned having to renew her faith in God and her calling each and every day, and make the decision to commit all over again. Who among us doesn’t do that in some way or another—whether it’s faith in a partner, faith in our art, faith in our choices, or faith in ourselves?

I loved the descriptions of life among the cloistered nuns and I read that you did first hand research. What surprised you the most?

A close family friend, Mother Lucia, went into the cloister before I was born. I only started hearing about her a few years ago, when my aunt told me that we ought to meet. She thought Mother Lucia and I would really hit it off. I couldn’t imagine how, but eventually we did meet and it turned out my aunt was right—I adored Mother Lucia from the start. She’s a lover of literature, a great thinker, and a wonderful conversationalist. And the abbey where she lives—Regina Laudis in Bethlehem, CT—absolutely ignited my curiosity and creativity. As a fiction writer who loves to do research, I always want to strike a balance between getting the details of a time and place as accurate as possible, while also diving into the unknown inner worlds of the people therein. Cloistered nuns raised so many questions for me—how did they end up in such a place? How did they know they should stay?

The Abbey is incredible. The nuns there all had full lives before joining and they believe that the gifts obtained in those former lives enrich the present. One of them, Dolores Hart, was a Hollywood actress in the fifties, who starred in movies with Elvis and gave up a film contract to become a nun. They have former politicians, businesswomen, artists of all kinds. I think what surprised me most was how freely and happily they spoke of those former lives, while also embracing their current reality. They weren’t running away from the past, but toward something deeper. (The other thing that surprised me was how funny some of them are. They have such wonderful senses of humor.)

Did you grow up in a religious household in Boston? I’m a Bostonian and you captured it so perfectly.

I was raised Irish Catholic in a suburb of Boston called Milton. Everyone in my neighborhood growing up was Irish Catholic as well, so those rituals of christenings and communions and weddings and wakes were fixtures of our lives. As was attendance at CCD and church every Sunday (and, when my friends and I got a bit older, finding ways to get out of going to CCD and church.) I was quite skeptical of Catholicism from a young age, and I continue to be. But so much about it never leaves you—I don’t even believe in God, but every time an ambulance passes by with its siren blaring, I still say a silent Hail Mary for the person inside.

The characters within one family in Saints For All Occasions reflect what I’ve seen in my own community—that there’s been a shift in the church’s power from one generation to the next. Nora and Theresa are devoted to their faith. It’s a ruling force in their lives. Nora’s adult children are far less devout. Two of them shun the church completely, and two go to mass mostly out of habit, or to please their mother. Still, it plays a role in all their lives. It continues to have a hold on them, even when they’re not sure why.

The relationship between the two sisters, Theresa and Nora was so alive, rich and tragic that I was sobbing as I was finishing the story because it seems to me that you truly got at what grace really is, what being human—and humane—really is, as well, as I found myself devastated in the best possible way. Can you talk about this please?

First off, thank you so much! You made my day. (Isn’t it strange that in our profession, it’s a high compliment to be told you’ve devastated someone you really like?)

Second, there are people—often family members—who shape our lives, even if we’re estranged from them. Maybe especially if we are. In this book, there are many different ways in which family members are lost to one another. Immigration separates Nora and Theresa from their relatives in Ireland, whom they never see again after making the journey to Boston. Death separates them from their mother, and from Nora’s son Patrick.

Nora and Theresa are central to each other, even though they don’t speak for decades. They have such a rich history. Even their separation grows out of misguided attempts on each of their parts to do what is right for the other. The epigraph to the book comes from a beautiful poem by Margaret Atwood: “I exist in two places/here and where you are.” I felt that was so fitting for many of the relationships in the story. But of course, I also wanted to see what would happen when the sisters finally do come back together after living such different lives.

Secrets and how and why we keep them infuses your novel.  Without giving anything away, do you think Patrick would have turned out differently had he known one of the secrets?

Oh yes. My friend Helen Ellis, after reading an early draft of the book, pointed out that it’s never the secret that does a person in. It’s the keeping of the secret, the shame that takes hold as a result. I think we are in a fascinating historical moment when it comes to secrecy—as a culture, I see us moving toward a more honest reality. I think the Internet, for all its flaws, has a lot to do with this. It’s easier now to find your people, to build community, and these things make it easier to be honest about who you are. In the book, Theresa gives birth in a home for unwed mothers in the early sixties. This was a real place in Boston. Files were sealed and later lost in a fire, so, until recently, it was basically impossible to know what happened there. I spent hours on online message boards, reading the stories of the people who passed through—birth mothers forced to give up their children and the children themselves, now grown, comparing notes on birth dates and names. In many cases, they find one another this way.

Even this past week, the silver lining of the healthcare nightmare was the fact that so many people refused to be silenced and took to social media to say, “I have a preexisting condition, here’s what it is, we are all human and imperfect, let’s stop pretending otherwise.”

I see this novel as being about many things, but chief among them is the idea of openness vs. closedness. There are secrets that these characters hold onto so tightly that they’re willing to give up almost anything to preserve them. The consequences are sometimes quite devastating. There’s also the question of how one lives in an ever more open and accepting world if one’s family of origin is still deeply repressed. Nora’s daughter Bridget is gay and in a relationship and in her forties, and Nora still refers to Bridget’s partner as her roommate.

Like everyone I know, I’m obsessed with and terrified by our current political climate. I’m expecting my first child in June, and I’m also quite obsessed with him already—wondering what to name him, what he’ll look like, which books to buy him. But also, how to tell him about the state of things. To that end, I’ve become obsessed with this poem called Good Bones by a poet named Maggie Smith. I recite it often to myself, like a little prayer:

I can’t think of one. I so love your blog. You’ve really been on fire lately. (Your interviews with Elizabeth Strout and Lidia Yuknavitch were two of my recent favorites.) Thank you so much for having me!