Larry Baker talks about The Education of Nancy Adams, the persistence of love, and why "obsessive" just might be his middle name 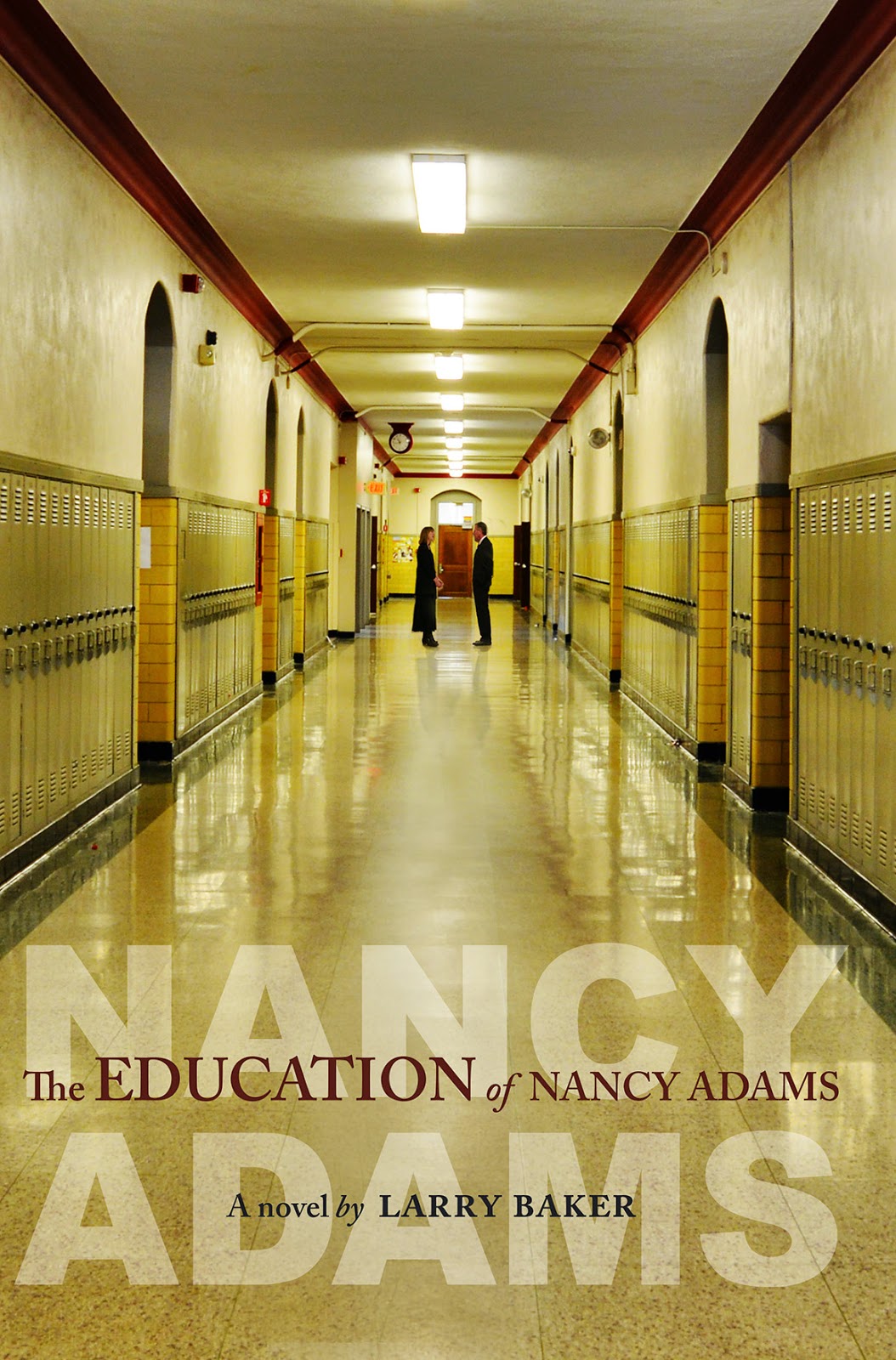 Larry Baker has been a Pinkerton security guard, master-of-ceremonies at a burlesque club, the owner of an Oklahoma drive-in theater, and is now an acclaimed author.  He's the author of The Flamingo Rising, which was made into a Hallmark Hall of Fame television movie and was chosen to be Iowa’s selection in the National Book Festival held in the fall in Washington DC; Athens, America; Love and Other Delusions; A Good Man: and The Education of Nancy Adams, where a young woman discovers that her new boss is her old teacher, a man she adored when she was 17.

A convergence of events. The basic black/white racial story comes from my time living in St. Augustine, FL, back in the 1990’s. Nancy remembers seeing a newspaper story about the two high schools in her town, showing pictures of the graduating seniors at the downtown versus suburban school...one lily white, the other more racially mixed. That was St. Augustine. That contrast was a “story” to me, but I did not have the characters.  Throw in the recurring stories about high school teachers having sex with students. I started with just Russell and Dana to personify that angle, but I always knew their relationship was only gossip. How about older man/younger woman, but without the passion, but who still have to suffer the consequences. Perception the same as reality. But that version was still missing something. Nancy Adams was a minor character in the first few drafts, but then I thought she should be elevated to the role of narrator, but not necessarily participant...ala Nick Caraway. As other writers know and you yourself have probably experienced...sometimes a character gets out of your control and takes over. That was Nancy for me. Trying to understand her as a character, led to a  spontaneous realization by me....Nancy was in love with Russell, but he was not in love with her. And THAT absolutely intrigued me. Nancy evolved from Chorus in the other story to the lead role in her own story, a woman trapped in her emotional past who is literally sent back into her adolescent “home.” She had loved, and lost, and it took 20 years for her to understand that, and then only through the intercession of a younger woman.

Your book has a tantalizing premise--a woman is going to work for someone she loved when she was 17 and now she’s 37. There is something about the persistence of love that is mesmerizing. Do you think it is really possible that we change, but the love does not?

I started this answer in my response to your first question. For me, love is like God. You do not know God through your mind or through the laws of a rational world. There is no proof for God, only Faith. There is no explanation for love (sex intensifies love, but it is not the same thing). You believe in God, or you do not. You experience love, or not.  You cannot “will” yourself to truly believe. You cannot “will” yourself to truly fall in love. And love, like faith, can be lost. But their loss in one’s life does not mean that God and love do not exist, merely that you have changed. Something from the outside has blocked the Faith in your Soul, or the Love in your Heart.  (Oh, geez, I think I just went too far sappy and purple prosy.)

What I love about your writing is the depth of character. How do you build your characters?

I don’t have a process or technique that fits all the time. I abhor clichéd characters, so my first goal is to fit a character to a situation, knowing full well that the world is not full of 3 billion one-of-a-kinds. We are all versions of a type. The trick for the writer is to make the type...not necessarily unique, but certainly individual. (Old definition of art in general: “To make the familiar unfamiliar.”) As you write, like in life, a character does not develop in a vacuum. I’ve already described a little of Nancy’s evolution as a character. From minor to major. But as I was re-writing her, I had to go back and figure out the “why” of her behavior.  Everyone has a past, and we are the combination of that experience and an evolved intellect.  Nancy lost her beloved father early in her life. She fell in love with an older man. She married an older man. All sorts of daddy issues. As I was working on that theme, I remembered another important dead white male father figure for American historians. Nancy Flynn became Nancy Adams. (Private pun alert...I named Nancy’s parents Charles and Frances, ala Henry Adams’ father Charles Francis Adams). So, as I was fleshing out Nancy’s character I was also expanding on the theme of how we are all shaped by history, as well as sometimes trapped by history.  To be free from the men in her life, she also has to be free of the intellectual ghost of Henry Adams. She has to literally become his teacher by the end of the book. I know, I know, this is the sort of self-conscious machinations that reveal an effort to write a “serious” book. But even that serious theme has to be hidden for the book to be enjoyable. Nancy is a smart woman but she has never given herself credit for her own intelligence. She is educated and insightful about others, but she still requires the intervention of Dana to finally understand herself. I know there is a “coming of age” fiction category, but I wonder if there is an “adult coming of age” genre. That is Nancy’s story.    |

I do not believe in Muses. And inspiration is over-rated. My literary hero is Flannery O’Connor, and she said it best: "I’m a full-time believer in writing habits…You may be able to do without them if you have genius but most of us only have talent and this is simply something that has to be assisted all the time by physical and mental habits or it dries up and blows away…Of course you have to make your habits in this conform to what you can do. I write only about two hours every day because that’s all the energy I have, but I don’t let anything interfere with those two hours, at the same time and the same place."

I am no genius, and my limited talent requires constant practice. Until my wife retired recently, I was able to work six hours a day, five days a week, nine months a year, and could produce 300 pages a year. With her being home, my routine has become more irregular, and less productive. So she and I have agreed that a laptop computer is on my Christmas list and I will be finding an outside location to go back to writing as much as I did before. But, on a good day, I start by re-reading anything I wrote the day before, and then I warm up and start putting words on the screen. Rituals? None, except that I drink a lot of coffee and stay in my office with the doors closed. I seldom do outlines beyond a basic plot direction and a list of characters and their basic traits. I live in Iowa City, home of the Writers Workshop, but I am not a WW graduate. I have been writing since I was fifteen. I do not belong to any writer groups. I write a complete first draft before I do any significant revisions. The first draft of NANCY was written in 1998. The final draft was written in 2013. Put the two versions side by side, you would be amazed by how different they are. Of course, in between 1998 and 2013, I wrote and published three other novels.

I am getting self-conscious about my age (67) starting to dull some of my writing skills, and I am trying to juggle two manuscripts I have currently started. I need to make a decision soon and focus on one only. I have a frame story written, about a dying publisher and his assistant editor (tentative title WINDSOR HOUSE, opening lines: “Suicide would have been an understandable gesture, if everyone knew the truth, but Bobby Beaumont had a secret, so he told the Germans to go to hell.”), and a mysterious manuscript they have received. The dying editor turns it over to his assistant (amid the crisis of a German conglomerate buying their parent company), and she discovers that the unfinished manuscript is actually about the editor, written about a love affair of his, with a married woman. That mysterious manuscript is the “story within the story” and it is still to be written, although I do have the opening lines: “I was stealing a book when he caught me. I was twelve. He was sixteen. I was taller than him, and I always would be.”

I want to write a book about the question of whether the book business itself is dying or merely being transformed. Or, have we merely romanticized what was always simply a business? Obsessive? Might be my middle name.


What question didn’t I ask that I should have?"

Here’s what I get asked at every reading I have ever had for this book: “How were you able to write from a woman’s point of view?”

Should you ask this question? I sorta think you already know the answer.

Wow -- two of my favorite writers talking. Perhaps over the internet, but it sure felt like you were in a room together, eating chocolate. Love love love!