Sarah McCoy, Jenna Blum and Erika Robuck talk about their new anthology GRAND CENTRAL, glamming it up for the launch, Modcloth, writing, and so much more 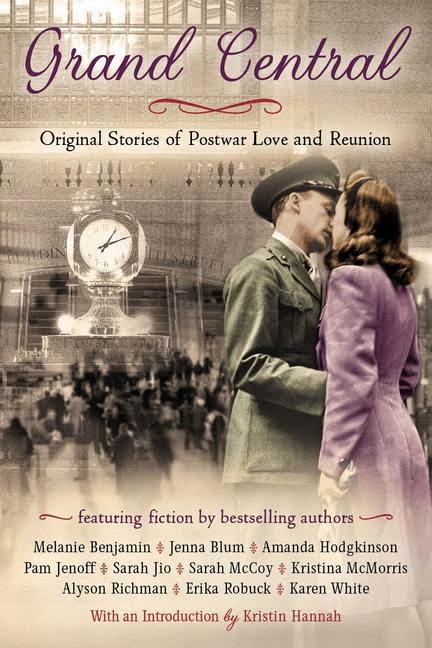 Ok, here's the truth. I'm friends with all of these amazing women and the only thing I'd like more than hosting them on my blog would be to hang out with them around dinner and toast them. They're all part of Grand Central: Original Stories of Postwar Love and Reunion. I want to mention the other amazing women in this anthology, too: Sarah Jio, Melanie Benjamin, Alyson Richman, Karen White, Carla Mercer-Meyer, Amanda Hodgkinson, Pam Jenoff, Kristina McMorris. Thank you so much, Jenna, Sarah and Erika for being here--and for everything.

JENNA BLUM is the New York Times and # 1 international bestselling author of novels Those Who Save Us (Harcourt, 2004) and The Stormchasers (Dutton, 2010) and novella “The Lucky One” in the postwar anthology GRAND CENTRAL (Penguin, 2014). Jenna is also one of Oprah’s Top Thirty Women Writers. Jenna’s debut novel Those Who Save Us is a New York Times and international bestseller; in 2011 it was the # 1 best-selling novel in Holland. Those Who Save Us is also a Boston Globe bestseller and the 2005 winner of the Ribalow Prize, adjudged by Elie Wiesel.
Jenna’s critically acclaimed and reader-beloved 2nd novel, The Stormchasers, which Jenna researched by chasing tornadoes for six years with stormchase company Tempest Tours, is also a Dutch bestseller, a Boston Globe bestseller, a Target Emerging Author Pick, a BORDERS bestseller, and has been featured in French Elle.

I had the BEST TIME ever being on a panel with Jenna, where we bonded over boots and laughed more than is probably legal.

SARAH McCOY is author of the New York Times, USA Today, and international bestseller The Baker’s Daughter, a 2012 Goodreads Choice Award Best Historical Fiction nominee; the novella “The Branch of Hazel,” in Grand Central; The Time It Snowed in Puerto Rico; and The Mapmaker’s Children (forthcoming from Crown, May 2015). Her work has been featured in Real Simple, The Millions, Huffington Post, and other publications.  Sarah also taught me everything I know about how to pack three weeks of event clothes into one carry-on suitcase, and which boots are the coolest.

ERIKA ROBUCK self-published her first novel, RECEIVE ME FALLING. Her novel, HEMINGWAY’S GIRL (NAL/Penguin), was a Target Emerging Author Pick, a Vero Beach Bestseller, and has sold in two foreign markets to date. CALL ME ZELDA (NAL/Penguin) made the Southern Independent Booksellers Bestseller list, and is a Target Recommended Read. FALLEN BEAUTY was released on March 4th, and she is a contributor to GRAND CENTRAL (June 2014, Berkley/Penguin), a short story anthology set at Grand Central Terminal in New York, following World War II. Her forthcoming novel, THE HOUSE OF HAWTHORNE (NAL/Penguin), will be published in May of 2015.

Erika taught me how to hand-sell our books at a book fest, even if it meant waving them in the air while seeming to dance.


So what sparked the idea for this book?