Joshua Henkin talks about The World Without You, throwing out two thousand pages (yes, that's right), and so much more 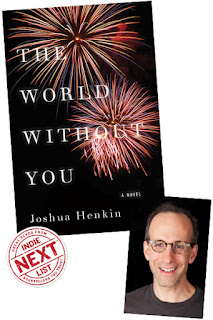 Joshua Henkin doesn't just write novels. He creates worlds. His characters are so alive, they breathe on the page, and you swear if you walk a block, you'll run into one of the places he writes about.  He's the author of Matrimony (A New York Times Notable book), Swimming Across the Hudson (A Los Angeles Times Notable book), and most recently The World Without You, an Indie Next Pick that is racking up so many raves, he can paper a villa with them. (I raved about it for the Boston Globe.) I'm honored to have him here to talk about writing and his extraordinary novel. Thank you, Joshua!

You have this absolutely mastery with creating characters who are rich and multi-faceted. So let's talk process. How do you craft your characters? And do you find that being able to see into the lives of people on the page translates so you can also better understand people in the flesh?

It’s a mystery to me how the book comes into being (fiction writing is such an intuitive process), which may be why I always wonder whether I’ll ever be able to do it again; the fraud police is always hanging over you.  But for me fiction is first and foremost about character—about making my readers come to know my characters as well as they know the people in their own lives.  And I think the way you craft characters is that you live with them day in and day out and you ask yourself as many questions as you can about them.  Who is your character?  Where did she grow up?  What kind of work does she do?  Does she like spinach?  Does she sleep on her back, her stomach, or her side?  It may seem inconsequential to know (much less describe) how a character sleeps, but not if the gesture is laden with meaning, as all gestures in fiction should be.  Does the character who sleeps on her side do so because she doesn’t like the smell of her husband’s breath?  Does she do so because she hears better out of one ear than the other and if she sleeps on her good ear she won’t be able to hear when her child cries out at night?

In my Matrimony, Julian meets his eventual-wife Mia after having spotted her in their college facebook.  He dubs her Mia from Montreal.  I wrote that phrase instinctively, probably because my own girlfriend freshman year of college was named Laura, and my roommate called her Laura from Larchmont.  I liked the alliterative sound of those words.  Before I wrote Mia from Montreal, I had no idea where Mia came from.  But she had to come from somewhere, and Montreal seemed as good a place as any.  But then I had to own up to what I’d written.  How did Mia’s family get to Montreal?  Had they lived there for centuries?  Were they expatriates, and if so, from where?  And how did Mia end up back in the States, in western Massachusetts, for college?  I could have chosen Mia from Madagascar or Mia from Maryland, and if I’d chosen Mia from Maryland, there might have been, for all I know, a long section in Matrimony about her family’s tangled relationship with the clamming industry.  But she wasn’t Mia from Maryland, she was Mia from Montreal, and so I discovered that her father had gone to teach physics at McGill, forcing her mother to abandon her career in the process, and that Mia, out of loyalty to her mother, decided to retrace her mother’s steps back to Massachusetts.  I knew none of this until I wrote the words Mia from Montreal, just as the writer who has a character who sleeps on her side doesn’t know why she sleeps on her side until she does so.

Does being able to see into the lives of people on the page translate into being better able to understand people in the flesh?

Maybe.  I’d like to think that writing fiction gives you a greater capacity for empathy.  But my suspicion is that the cause and effect is in reverse—that understanding people better in the flesh leads you to be able to do it on the page.

Your subject seems to be family. So what was yours like? Do you draw on it at all?

Ron Carlson said that he writes from personal experiences whether or not he had them.  I feel the same way.  Good fiction has to be emotionally autobiographical.  The writer has to be at risk; you have to be very close to your material.  That’s quite a different thing, however, from saying that the work is narrowly autobiographical or that your characters are based on people you know.  I come from a complicated family in that, though both my parents were Jewish and raised in New York City, their backgrounds couldn’t have been more different.  My paternal grandfather was a famous Orthodox rabbi who lived on the Lower East Side for fifty years and never learned English.  He lived exclusively in a Yiddish-speaking world.  My mother was raised in the Bronx, on the Grand Concourse, in a secular Jewish home.  She went to a progressive private school with no walls between the classrooms and everyone campaigned for Adlai Stevenson and believed that someday we’d be speaking Esperanto.  So I know a lot about both the religious Jewish world and the secular Jewish world, and absolutely—my knowledge of those worlds helped in writing The World Without You.

You also teach as well as write--as I do--and I wanted your take on what you get from your students and when you feel that you absolutely must take a break and do nothing but write. Or does that never happen for you?

I direct Brooklyn College’s Fiction MFA Program, and at the risk of sounding like a pollyana, I can’t imagine a better job.  In a typical year at Brooklyn we get 500 MFA fiction applicants for fifteen spots in our incoming class.  So we’re dealing with some of the very best young writers out there.  In the last few months alone, five of our recent graduates have gotten book contracts.  There are writers who wouldn’t know how to teach; for them, writing is an intuitive process and they aren’t fully conscious of what they’re doing.  For me, it was the opposite.  I could read someone else’s short story and figure out what wasn’t working long before I could make things work in my own stories.  I needed to learn how to become a more intuitive writer, and critiquing other people’s stories helped me do that; it still helps me.  I’ve been at this process longer than my students have, but we’re all struggling with the same thing—how to write convincing stories; how to make our characters come so deeply to life they feel as real as, even realer than, the actual people in our own lives; how to use language in a way that’s precise and beautiful and utterly true.  That never changes.  So in a way, even though I’m the instructor, we’re all students in the room.  Also, I’m a fairly social person, and writing is incredibly solitary, so teaching gives me the chance to be with other people and to talk about what I love.

Obviously, teaching takes time away from my writing, but a lot of things take time away from my writing—my wife, my kids, my friends, going out to dinner, going to the movies—and I wouldn’t trade those things for anything in the world.  So you manage to find a balance.  I write from 9 in the morning until noon five days a week during the semester, and then over school vacations I write more.  Do I wish there were more hours in the day?  Sure.  But on balance, I’m able to find time to write.

Why do you think your novel seems to have touched a nerve? Besides the quality of the writing, what is it about this multi-faceted family that has won over so many critics and readers, do you think?

That’s hard for me to say.  I’m just grateful for the response. Why something works is as mysterious to the writer as it is to anyone else.

My new novel, which is still in its very early incubating stages.  I’d been hoping to be further along with it at this point, but it’s still taking shape in my mind.  Not that I ever know in advance what my book is going to be about, but I like to have some general idea of what’s animating it, and that animation is still coming to me—coming more slowly than I would like.

How many pages I threw out.  Two thousand for The World Without You and three thousand for Matrimony.  I can’t even remember for Swimming Across the Hudson, but a lot there too.  Maybe I’ll be down to one thousand for my next book, but I hope not.  You have to write a lot of bad pages to get to the good pages.  I remind my students every day how much hard work it takes to get a novel right.  Talent is important, of course, but persistence and determination are at least as important.
>
> Thank you, thank you!
Posted by Caroline at 12:09 PM