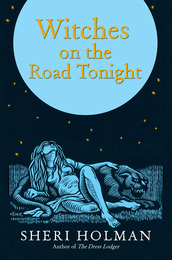 Sheri  Holman’s one of the coolest people on the planet. A brilliant writer, her first novel, A Stolen Tongue was translated into 13 languages and The Dress Lodger was both a national bestseller and a New York Times Notable Book of the Year. The Mammoth Cheese was short-listed for the UK’s Orange Prize, and she’s also written for children. A founding member of The Moth storytelling venue, she lives in Brooklyn with her family. I'm honored to have Sheri here, and her essay, about the ways we cope with fear is a stunner. Thank you, Sheri. For everything.
We noticed something was wrong while I was on tour for my last novel.  My beloved publisher Grove/Atlantic had managed it so that my mother and aunt could travel along, helping to care for my six-week old twin boys.  It was an exhausting, exciting time and trouble was far from my mind.  But while Felix was nursing and gazing at me as babies do, his twin brother, Linus, was looking down and away, not making eye contact.  My mother worried he was blind, and while I didn't think it was that extreme, I did have a irrational  gut feeling something was terribly wrong.  Home from tour, I took him to the doctor,  but the pediatrician told me twins sometimes lagged behind developmentally.  Unable to shake the feeling, I took Linus to an ophthalmologist to have his eyes checked.  Looking into my three month old son's dilated pupils, the doctor grew quiet and left the room.  When he returned, he had the number for an oncologist.  He had found a massive tumor on Linus's retina, pressed against the optic nerve.
I had thought I knew what it was to be afraid, but I had no idea the depths of terror and helplessness into which a parent could be plunged with the serious illness of a child.  During the next few years of Linus's intensive treatment – chemo, radiation, laser, and cryotherapy (not to mention the normal sleep deprivation of raising twins and their barely older sister) – our family struggled to stay positive and strong.  But fear ate away at everything, and as much as I fought it, superstition and magical thinking crept in.  I had failed at a mother's first job – I could not protect my child.  I lost confidence, saw danger everywhere.  I popped into random churches to light candles, I made bargains.   I tried to write – the medical bills were piling up – but I had nothing to say.  One  especially frigid winter morning, waiting for the car to warm up so that I might drive Linus in for his predawn appointment, I sat reading Lorrie Moore's brilliant “People Like That Are the Only People Here.”   It was the first time I cried, and  I sobbed until snot ran down my chin.  It was too good and too true.  Even as I wiped my face, I wondered if I would ever again have room in my life for fictional characters.  I wondered if I even cared.
Up in the middle of the night, nursing fretful babies, I would watch the news.  The casual fear- mongering, which before had caused me to roll my eyes, now felt cynically manipulative.  For us, the world did seem to be coming to an end, we felt perpetually under attack by unseen forces. And the news was mirroring and heightening my own fears.   I watched as supposedly respectable journalists like The New York Times's Judith Miller conjured horror stories about weapons of mass destruction.  I watched America plunge itself into a blind war and destroy the lives of millions, leaving families here at home and in the Middle East gutted, children orphaned.  I thought about how easy it was to mobilize an already weakened society, how terror becomes its own weapon of mass destruction, effecting not one generation, but the descendants of all it touches.  I began to ask myself what sort of societal suicidal impulse spawned a news media invested in keeping us paranoid and afraid? Who profited by this?
Under the care of a dedicated, gifted group of doctors, my son got better, and is now a happy, healthy, wickedly funny eight year old. Ultimately,  I took those years of anxiety and anger and poured them into the book that would become Witches on the Road Tonight, a novel that explores America's fascination with fear through three generations of the Alley family – Cora, a mountain witch who rides men at night; her son Eddie, a campy TV horror host, and granddaughter, Wallis, an anchorwoman for CNN.
I've been away from publishing long enough that I've lost my illusions a trajectory exists for any writer's career.  It's a scary thought and sometimes gives me the 5 am panic attack.  Sometimes, I still wonder how much I have to give fictional characters; and, yes, sometimes, even if I care.  But writing about my own primal terrors has taught me that fear is ours to control.  And having my son tickle me awake every morning, demanding his breakfast, gives me the courage I need to keep finding out.
Posted by Caroline at 7:34 AM

So powerful. As a mother who's gone through (to a lesser degree than you) two serious hospitalizations with my kids, I understand the gripping terror too well. Your ability to turn that into a writing success is incredible and very motivational. Thank you for sharing your remarkable story. (And thank you for running this post, Caroline!)

Thank you, Sheri, for sharing this story from your life as mother and writer. SO glad your son is OK and that your novel was such a brilliant way of reckoning with the fear.

I respect the journey you are on, the priorities you made and kept, and am eager to read your new book.

Fantastic essay. The Dress Lodger remains one of my favorite books, and I've given it away numerous times as a gift. I drank Witches on the Road tonight in less than three days, but I had no idea its wrenching beauty began as a personal struggle. Thank you for sharing the story of its genesis with us, and keep fighting the good fight.

I feel that is among the such a lot significant
info for me. And i am glad reading your article.
But should observation on some general things, The site style is
wonderful, the articles is truly nice : D. Just right process, cheers