Sam Winston talks about his extraordinary debut What Came After, crossover writing, bad advances and the future of us and of publishing 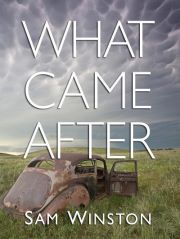 This is a magnificent book, Caroline! I'm so happy you discovered it and are giving Sam some airplay.

And Sam, I am breathlessly awaiting the next book, so I'm happy to hear you have a solid writing routine. Best of luck!

Spot on with this write-up, I absolutely believe this amazing site needs far more attention.
I'll probably be returning to see more, thanks for the information!