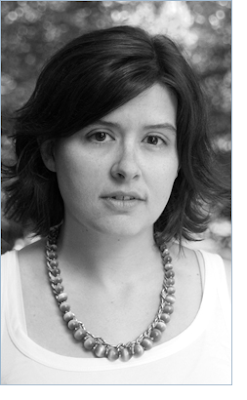 Husband and Wife by Leah Stewart is a richly satisfying read about marriage, identity and fidelity. I'm thrilled that Leah offered to answer my nosy questions. (Thank you, Leah!)

Husband and Wife focuses on one of my favorite personal themes, how well do we really know the ones we love? Would you care to answer that?

I wish I could answer it--I think my curiosity about that very question has driven all my novels, at least in part. My first novel ultimately suggested, I think, that you can't know other people, and that you just have to find a way to live with that. I don't think my answer has changed in substance, but it's changed in degree. In Husband & Wife I have Sarah say that learning Nathan cheated might suggest that she didn't really know him, but that she refuses to accept that. She insists that she does really know him even though she can't ever know him completely. I suppose that's where I come down now.

I’m intensely curious about process, so I’d like to ask you where this particular novel had its inception. What sparked the writing?

Since I was in graduate school I've been trying to write a historical novel based on my grandmother's experience as a field nurse in WWII. I worked on it after my first book came out, and then put it aside. When I went back to it after my second book it proved to be just as difficult, but I kept at it for a while, as I had a second child, and moved, and started a new job, and then I think I grew tired of that struggle when I was already so tired. So I decided to write something closer to what was on my mind. Motherhood, obviously, and identity, and the role work plays in identity, and how marriage changes after parenthood. I'm not sure exactly how I came to the infidelity plot, except that I'd seen friends go through similar situations. The original first sentence was "I'll begin with the end," and then Sarah described her husband's confession, which is essentially still the first scene.

In the novel, Sarah discovers her husband is writing a book on infidelity which has its seeds in truth. It’s a stunning moment, and it feels like an even worse betrayal because he’s attempted to turn his cheating into art. Which brings us to the question of how much boundaries should their be between real life and art?

As a writer my answer is that there should be no boundaries, or infinite boundaries, or whatever your work needs. When you're immersed in the work it feels like your only mission is to make it as good as it can be, however you're able to do that. But when your work is to be published I do think you have to think about its impact on the people close to you (or risk being the Woody Allen character in Deconstructing Harry). If I want to use a detail from a friend's life that seems particularly sensitive, I'll ask first. For this book I based the three-year-old girl on my daughter, who was that age at the time. Now, at five, she's delighted to know her finger-sucking habits are immortalized. But I suspect her life will be off-limits when she gets older.

Your husband is also a writer. Do you trade pages?

We do. He's a really meticulous line editor, which drives me nuts but is also good for me. We used to have dramatic fights when one critiqued the other's work. Now we just politely say thank you for the criticism, although I'm sure we get just as agitated underneath.

What’s obsessing you now that is compelling you to write?

Still questions of identity! (What is it with me and identity?) This time I'm thinking a lot about the intersection between identity and place. Also I've turned my attention to sibling relationships, which I haven't done much with so far. And the ballet.

Hmmm. What are my favorite TV shows? (Chuck, Community, The Good Wife, Fringe . . . ) Or, how do I feel about the condescension inherent in the way much fiction by and about women gets treated? (But maybe you don't have space for a rant!)

Caroline,
You consistently offer great interviews and book suggestions. My reading list grows with each visit.

Another great interview. Love the issue of identity here.

Great interview! And I especially loved the parting shot about how fiction by women is treated. I also enjoyed Leah's comments about criticism between her and her husband. My sweetie has learned that he can ask questions but that he has to say, "I really like it" or I'll throw something at him!

This is a great interview. I'd love to hear Leah's rant on how women are treated in fiction. I'd probably be able to add a few thoughts of my own.

I agree, terrific interview! Just enough to pique curiosity about Leah and her writings. Looking forward to reading HUSBANDS AND WIVES...love the cover, too! K.

Can't wait to read this one. It's on the list.