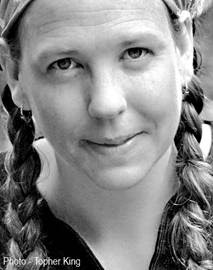 I am deep in novel revisions of Breathe and finishing my scripts and generally so overworked my head is about to explode. Writing and working so hard is a little hallucinatory. I don't sleep much these days, and I cannot relax, and I am pretty much tense, nervous and wired.
BUT, I can and do read, and one of the books I absolutely adored was  A. S, King's fantastically good  The Dust of  100 Dogs.
I met Amy via email when we both were nominated for a Best American Voices prize.  I didn't get it, but I am hoping that Amy does--she's THAT good.  We met again at a Bookspace conference and we instantly hit it off. She's smart, funny, warm, and a terrific writer. I'm really thrilled to have her talking here!
The Dust of 100 Dogs is a gorgeously complex novel that begins with a famed teenaged pirate who is cursed to living 100 lives as a dog before she returns to a human body--that of a contemporary American teenager. But the book is really about so much more than that--about how to live a life with grace, how to move in and out of the possibilities of other lives and very different times. Metaphysical, smart, thoughtful, and also loads of fun.
You mentioned that you didn't write this book as YA, and that you get fan mail from people who are not young adults.  I read and loved your book, and I don't really see it as YA, either.  Though to be truthful, what really IS YA  I have read so many wonderful books an was surprised to see them marketed as YA, and I have quite a few friends whose novels were marketed that way--even when we all felt the story clearly was not.  Why do you think the publisher thought it was, and do you think that it makes more sense to market the story rather than the genre?
I think if the choice was between marketing the story or marketing the genre, I would ask ‘to whom?’ because the answer to most marketing questions is defined by the audience. So I believe marketing D100D in YA and allowing it to cross over is probably a wise decision. Presently, the YA community has some amazing mojo. Though some underlying industry feelings about YA seem to sell it short, I think people are starting to realize YA books can be very serious literature that spans generations of readers. I think my YA books are crossover books, for age fourteen and up, but a lot of my fans are over forty. It’s a tricky mix.

(If you don’t mind a short related tangent… What strikes me as odd is the way some adults seem to think all teen literature is cute pimply stuff—until they discover heavy subject matter, and then react as if this is going to ruin their innocent children (who’ve been watching Law & Order since the were in single digits.) I’m also surprised by parents who think their kids are smarter than age requirements. “Fourteen plus? My kid’s smart, so she can read your book at age nine.” Uh – no. The content in my book is for fourteen and up. It’s not about reading level. It’s about subject matter that’s inappropriate for nine-year-olds. As a parent, I know how hard it is to draw these lines—especially these days. Last month, I turned off the Super Bowl after about fifteen minutes, in order to not subject my six-year-old daughter to the over-sexualized and violent-TV-show commercials. On one hand, we allow prime time content to sink to the level it has, and on the other, we call foul when an author writes tamer content into a book for teenagers. What’s with the double standard? And why, when we know this culture pushes children into adult behavior early, are we still assuming that young adults can only relate to books about other young adults? My favorite books as a teen were Orwell and Philip K Dick. My favorite TV show as a child was M*A*S*H. There wasn’t one child character. There was blood, death, sexual innuendo and jokes I didn’t get. But I saw what good adults looked like, and aimed myself.)

I loved that you said anything is possible, including reincarnation. Do you also like to stretch the boundaries of what is possible in telling a great story?

I do. A lot. It’s the fun I have. I live to twist things into shapes that shouldn’t work. I love to try things and toil over them until they say what I want them to say, even though they say something else. I’m fiercely sneaky.

A teenaged female pirate is one  wonderful lead character.  What was your research like? (There are, I know, some great female pirates in history.  One, I believe, was almost hanged before they realized she was pregnant!) How much liberty did you take in your research?

The pirate history is basic. There were quite a few women pirates at the time, but Emer Morrisey is fictional, as is her journey. But it was possible. There were shipments of women at the time from Paris to Tortuga, Spanish ships did gather in Havana as a last stop on their way to Spain, and Cromwell did savagely conquer Ireland.

The best part of the [Irish] research process for me was how tactile it was. There is something about living inside recorded history—it was fascinating to learn about what happened to and around my [Irish] property during the last 500 years. I also took my first trip to Jamaica during this time. Traveling is my favorite kind of research. I try to use every place I go as a setting in my fiction at some time or another.

4What struck me about the Dog Fact parts of the book was the dignity of the dogs’ voices, the probing intelligence and the respect you gave them. (I loved that the dog said that "Shameless and stupid" really means "free and simple.") Which came first for you, the idea of the dogs or the voice?

I think I wanted to create a sort of life training guide from the dog’s point of view. That line you quoted about “shameless and stupid” really meaning “free and simple” sums it up for me. I like the natural truth of things. As long as it’s genuine, I’m comfortable. Dogs are genuine, so it made sense to use them as a vehicle for talking truth. (Because humans lie a lot and complicate and judge everything.)

Of course, the Dog Facts are as much about human training as they are about dog training. From where I stand, I am seeing a decline in discipline in both areas. I feel that as a culture, many of us have lost sight of how to make confident, self-sufficient humans, and are mollycoddling in order to not hurt any child’s feelings, or leave any child behind. Personally, I fail to see how dumbing down education and allowing unruly children to rule households and schools is beneficial to society—or to themselves.

I think what I want to know is why did you choose dogs to be her curse--especially in the light of the voice being so intelligent--the dog fact chapters are so full of grace considering that she is under a curse.

But isn’t that what happens when cursed? One grows grace and patience in order to endure it, yes? (Along with a smashing sense of humor.) In this case, the curse is part metaphor, because every one of us is cursed in some way, depending on how we look at it, right? Back to the dogs—I don’t think I chose the dogs for any particular symbolic purpose. I think they inspired the idea, and so they were part of the book from day one.

What is your working day like? And can you talk about what you are working on now?

My work time is interesting these days. I have very young kids so my husband and I juggle them, this career, a small business and life. I usually write in chunks of time. A month here, a month there. In between, I take care of promotion and the business stuff, and I write short fiction. I just finished another crossover/YA novel, Ignore Vera Dietz, and am presently working on a book I hope to have drafted by summer. I can’t tell you what it’s about, though, because I’m not really sure yet.

I loved it that Emer transformed/reincarnated into the teenager Saffron, but it feels to me that this book is asking very deep questions about how we perceive our realities and get our knowledge about the right way to live. Her knowledge as a dog informs her as a human being, and her knowledge as the pirate informs the teenager. I felt that reincarnation was a metaphor for being able to move out of our own tended lives into the lives of others. Was this your intent or am I making this up?

The beauty of this book is how you move in and out of genres.  At times it is a yearning love story, then it becomes a historical book about Emer's becoming a pirate, and then it becomes a very contemporary drama filled with teenaged-wasteland type angst--yet all three threads are tightly held together because it really is the same person. Was there ever a moment when you worried you might not be able to pull this wildly original premise off?

I’m sure there were days I felt I couldn’t pull it off, especially considering how long it took me to get it right. But by the time I got to writing The Dust of 100 Dogs, which was my sixth novel, I had stopped caring about ever getting published, so more than anything, while writing it, I had a lot of fun.

What question didn't I ask that I should have asked you?

I’m trading in this answer for my tangent in #1 because I don’t want to go too long & you asked fabulous questions!

Thanks for having me Caroline!

What a wonderful interview!

Great interview, Amy (and Caroline). I love what you say about YA, and about breaking barriers, which you do so well.

Congratulations on your debut!!