Race. Foster Care. Deep secrets. And what makes a family. Lisa Sturm talks about her gripping novel ECHOED IN MY BONES. 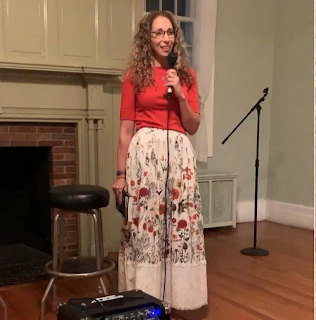 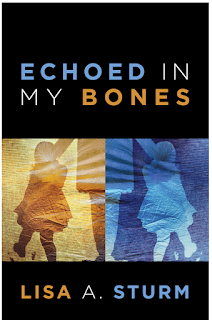 Lisa Sturm's gripping novel is about race, foster care and the traumatic secrets of the past.  As a young girl, Lakisha gives up her newborns, one who looks white and one who looks black, into the foster care system. But years later, Laikisha must search for them to save another--and herself.

Here's just some of the praise:

“This uplifting story reminded me that the invisible threads that create a family are often stronger than time, distance, and hardships.”
-- Jennifer Haupt, bestselling author of In the Shadow of 10,000 Hills

"Drawing on her experience as an inner-city psychotherapist, Lisa Sturm reminds us just how much distinct environmental stressors, or advantages, pave our paths in life, and also how profound our need for family is. This well-crafted and well-imagined novel will keep you reading well into the night."
-- Ellen Sherman, Just the Facts and Monkeys on the Bed

Thank you so much, Lisa for being here!

I always, always ask this question. What was it that was haunting you personally that propelled you to write Echoed in My Bones?

I suppose, in some sense, I was haunted by former psychotherapy patients whose suffering or faith or resilience or decisions I found deeply moving. For example: There was a seventeen-year-old girl who needed to prepare for the SATs and couldn’t afford a study guide, so I gave her an extra one we had lying around the house. When I handed it to her, she kept running her fingers over the glossy cover and finally shared, “No one has ever given me a brand-new book.” That stuck with me. There was a mother of six who had survived childhood homelessness and sexual abuse and sought therapy because she wanted to ensure her past trauma wouldn’t interfere with her parenting. Her strength was inspiring. I’m haunted by a mother I saw just a few times, who was court-ordered to receive counseling because her husband had injured one of their children while drunk. Child Protective Services warned that if her husband didn’t move out during the investigation, her kids would be taken away—but for some unfathomable reason, she couldn’t ask him to leave. I still struggle with that one. Finally, there was an eighth grader whom I saw after she’d been repeatedly raped by a family member. In foster care, she’d become sexually active with boys in the neighborhood and her foster mom threatened to kick her out. That girl was so sweet and so loveable, I often fantasized about adopting her myself. I’m sure there were others, but those are a few that stand out in my mind.

You’ve written such a powerful and provocative novel about race and family and the choices that we make. Can you talk about this please?

When I worked with these inner-city women, I felt a strong bond. Most of them had no other safe place to share their feelings, and so our sessions were particularly raw. There were certain themes that came up repeatedly: faith, hope, family, abuse, trauma, mistakes and repairs, and unrequited longing for connection. My office was a ten-minute drive from my home, and yet before taking this position, I’d had no idea of the suffering that was occurring practically in my own backyard. I tried to write from a place of caring and compassion, wanted to share what I’d learned about their hardships and how I’d made sense of it. Like Grandma Louema in the novel, I wanted to transmit a message of hope and healing. This story carries with it a wish that all of my “ghosts” find their own place of peace.

What was it like writing this novel? Was there ever a moment when you thought you had lost the story? And are you the kind of writer who plots things out or do you wait for that pesky Muse.

Right from the start, I was clear about the beginning and the end of the novel. It was wrestling with what should be included in the middle that proved difficult. Deciding in what order the story should be told was also quite challenging. The biggest plot shift came during the fifth rewrite (with the help of a wonderful developmental editor, Julie Mosow), when I changed the way Tessa and Jasmine come together. By editing out a few unnecessary scenes, I also gained more space to really explore my characters’ thoughts and emotions. For my next project, rather than waiting for the muse, I’m trying to flesh out all of the backstories and outline each chapter before attempting a first draft.

Can you talk about the great title, please?

Echoed in my bones was always a line in the poem that came to define the various parts of the novel. Once the search for a bone-marrow donor was woven into the plot, echoed in my bones became meaningful on many levels and seemed the perfect title. Fortunately, my publisher agreed!

Lately I’ve been thinking about former patients who were in law enforcement and others who were in gangs, and I’ve been pondering the way personal history plays a role in decision making, particularly when people are under pressure. My next project is about a therapist, Delia Chase, whose drug-dealing client, Darnell, is murdered on the eve of his escape from gang life. In a desperate attempt to figure out how and why he was killed, Delia recruits another client, a police officer named Jimmy, to help.

Did the question of “cultural appropriation” figure into the process of getting this book published?
As I was querying for representation, this question did seem to deter some agents. Fortunately, I found a publisher who understood the special perspective my therapy work afforded me in the creation of this story, and I did enlist sensitivity readers from the community who combed through the manuscript. Because of my deep concern about this issue, the review that gives me the most satisfaction came from The Director of the Irvington Library (located just a few blocks from the clinic where I worked). Once she raved about it and told me she was recommending it to her own book club, I breathed a sigh of relief—and then did a happy dance.