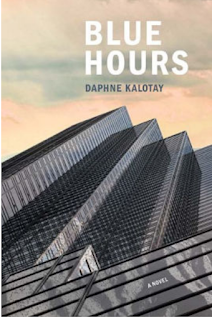 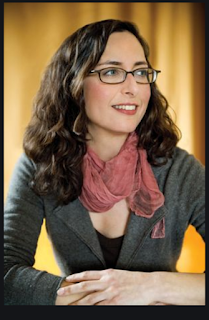 Daphne Kalotay is the author of Calamity and Other Stories, short listed for the 2005 Story Prize, and her debut novel, the national and international bestseller Russian Winter, which won the 2011 Writers’ League of Texas Fiction Prize, made the long list for the IMPAC Dublin Literary Award, was nominated for the Dayton Literary Peace Prize, and has been published in over twenty foreign editions.

Daphne’s second novel, Sight Reading, was a Boston Globe bestseller, a finalist for the 2014 Paterson Fiction Prize and winner of the 2014 New England Society Book Award in Fiction. “Relativity,” from her collection-in-progress, was the 2017 One City One Story Boston selection. Daphne lives in Somerville, Massachusetts and teaches at Princeton University’s Program in Creative Writing.

Her latest novel BLUE HOURS is just mind-bendingly great. Just look at these raves:
“Rich and layered ...Kalotay’s sense of place — the physical geography as well as emotional landscape — is as savvy and sharp as her portrait of the friendship between these two women. The novel unfolds cross-continentally, cross-class, cross-hearted, moving from New York City in the early ’90s to Afghanistan in 2012, and in Kalotay’s skilled hands the novel is both richly human and deeply political.” —Nina MacLaughlin, Boston Globe

“A sharp portrait of an isolated woman seeking to understand a defining relationship of her past. ...The novel successfully raises important questions about decisions made on both intimate and global levels, and their consequences.” —Publishers Weekly

“What a terrific novel. Only a book this good could move so well from the intensities of youth to the disasters of the global world—love’s joys and miscalculations from the East Village to Afghanistan. Beautifully written, Blue Hours did that rarest of things, it took me places I never expected to go.” —Joan Silber, NBCC award-winning author of Improvement

Thank you so much for being here, Daphne!

I always think writers are somehow haunted into writing their books—what was haunting you?

At first, it was simply the ghost of New York City in the early 90’s—the struggles of that time (AIDS, the recession, the first Gulf War) along with the youthful energy and blithe naivete, which really does seem lost forever, swept away by the economic boom that put the city out of reach for young hopefuls and by, more broadly, 9/11 and our country’s wars in the Middle East. Then it was my dear friend Xavier, who works for the Red Cross, telling me his headquarters in Libya had been bombed; that was in 2012, less than a year before I heard on the news about an American serviceman being held by the Taliban. I started thinking about these two types of overseas work—military and humanitarian aid—and ideas for the book began to percolate.

What I loved so much about your book was how it zoomed from NYC to Afghanistan, from issues of race and class and how they impact our lives. This seems especially timely today.

I’m struck by the ways that wealth and whiteness cocoon so many of us (I’m no exception) from facing truths about Western imperialist behavior, including our (my) own. I would include in this our very American tendency to ignore what might be happening in non-Western, non-white countries—even when it’s our own country’s foreign policy shaping these countries’ events. In terms of class, I’m struck by the fact that so many people who join the military do so for lack of other options, while the wealthy can avoid it, and the way that this inequality probably warps our nation’s policy decisions. I wanted to show the consequences of these decisions at the granular level, through personal lives and loves.

I also loved the friendship between two very different women—and the stakes of that friendship.

Girls often look to other girls and women for examples of how to be, and for Mim, Kyra has the added glamour of being rich and seemingly carefree, while simultaneously sort of slumming it as a dancer in the Village—but really the qualities that define Kyra are compassion and clarity of vision. She’s one of the people who help nudge Mim into a greater awareness of herself and the world around her. The irony is that while Mim sees Kyra as the brave one, Mim herself does something just as gutsy and generous when she decides to go help find her.

What kind of writer are you? What’s your process and how do you wish it were different?

I’m a terribly impractical writer. My process is basically to sit down and open an notebook and write down thoughts and ideas, and at a certain point, when I worry I’m going to lose the notebook, I type it all into my computer into various not very organized documents, hoping some are enough of a kernel of something—a story, a novel—for me to continue working on them. If I need to learn more for a project, I do research by reading, seeking out experts, watching documentaries, anything to gain information that will allow me to write with some sense of authority. As for what I wish I did differently: I wish I could begin with a concept that was saleable as a project and go from there.


Right now, I’m obsessed with the migrant ships that are being turned away from port after port, and what it must feel like to have fled one’s country and risked one’s life and now be literally and metaphorically adrift. My father was a refugee, so part of this is personal, but I’m also compelled by the sheer drama of these stories. I was captivated a few weeks ago by the rescue ship captain who finally gave up and docked at Lampedusa and was immediately arrested; I’m interested in the quandary of all parties involved—the migrants rescued at sea, the volunteers who rescue them, and the countries who feel they’ve been pushed to their limits.
What question didn’t I ask that I should have?
Maybe what I see as my job as a writer?

To keep my readers engaged enough that they keep turning the pages, while creating something vital and meaningful enough to be reread.