An art school hidden in Grand Central Station? That's right and sublime author FIona Davis writes about it --and art, history and memory--in her new novel THE MASTERPIECE 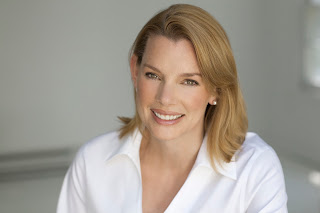 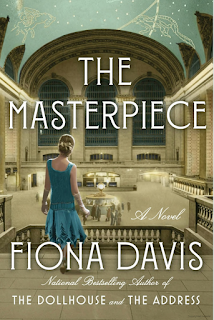 I was lucky enough to meet Fiona Davis and do an event with her--but the REAL reason I adore her is that she had my 90-year-old mother-in-law totally engrossed in her book! The Masterpiece. It's an August LibraryReads Pick, and the raves are piling up. (Starred Library Journal; Publisher's Weekly calls it "splendid.") She's a one time Broadway actress who made the transition to writer, producing the sublime bestsellers THE DOLLHOUSE and THE ADDRESS. The only thing that would make me more thrilled than having her here would be to have pie with her.

I always think writers are haunted into writing their books. What urged you to write The Masterpiece?

I’m haunted by stories of women who have it all, then lose everything and have to scramble to figure out who they are. I guess you’d call it a reverse Cinderella story, but it’s always fascinated me. With The Masterpiece, I made one of the characters a New York City socialite-type who falls on hard times and has to take a job in the information booth at Grand Central Terminal. This section of the book is set in the 1970s, when the city was crime-ridden and the terminal a filthy, dark hellhole. Another fascination of mine is old buildings with a long history, and so I enjoyed setting the other timeline in the 1920s, when the terminal was a gleaming landmark and the hub of the city. Both the landmark and my heroines rise and fall with the changing times, in a way that parallels the resilience of the great city of New York.

I was stunned to discover there had been an actual art school at Grand Central! How did you discover this astonishing fact?

I was pretty certain I wanted to set a book in the terminal, but was unsure if I could pull it off. What would the plot be? A love story between a conductor and a commuter? Hmmm. Nothing was clicking. But one of my research books on the history of the terminal mentioned that the painter John Singer Sargent co-founded an art school on the top floor of the east wing back in the 1920s, and that it existed for 20 years and enrolled around 900 students a year. Now that I could work with!

What was your research like? Did anything make your story veer into a different direction? And what surprised you the most?

I didn’t know much about the art world, and so I read biographies on painters like Arshile Gorky and Lee Krasner and interviewed illustrators and artists about technique. One day, I was flipping through an old course catalog from the Grand Central School of Art and noticed there was only one female faculty member listed. The teacher’s name was Helen Dryden, and she illustrated over 90 covers for Vogue and was wildly successful before disappearing from view. I used Dryden’s heady success and failure as the inspiration for one character’s story arc, and would never have known about her otherwise.

Also, I found numerous mentions in The New York Times about the art school: how they had a summer program in Maine and held fancy dress balls every May. As a writer, this was pure gold, informing settings and scenes that ended up in the book.

I also loved the two different time periods and the two very unique women, which brings me to my favorite kind of question about structure. How did you map this all out?

Here’s my plotting technique, from A to Z: I start with the main characters, really examining who they are, what they want, and figuring their strengths and weaknesses. Then I brainstorm scene ideas for each timeline and write them on Post-its, before arranging them in some kind of logical order and intertwining the two eras. I can usually come up with a reasonable chapter-by-chapter outline from that. You might be able to guess from my methodology that I come from a family of engineers, so it’s all very logical and right-brained. I’m in awe of writers who can let the story take them where it will. If I tried that, I’d be wandering around my apartment all day moaning and eating blocks of cheese. I need to know where I’m headed at all times.

Your novel, The Dollhouse was critically acclaimed. Did that make it harder or easier to write The Masterpiece? Did you feel like you could build on the lessons you learned or was it like approaching a totally different project?

I’m definitely building on what I’ve learned from writing each book, and from working with my brilliant editor, Stephanie Kelly. So it does get a little easier from the writing-technique angle, although not from the oh-my-God-I-have-to-research-an-entire-era-that-I-know-absolutely-nothing-about angle.

I start on the next manuscript not long after I’ve turned in the previous one to my publisher, and this was very helpful when The Dollhouse made such a big splash. If I weren’t already up to my elbows in another first draft, I might have gotten stuck, wondering how to capture the magic again. Instead, I was tackling new characters and a new landmark building and well on my way. I think this is one way that my journalism background has helped, in that I’m used to writing every day and was eager to start work on a new story well before the reviews for the first one started trickling in.

Can you talk at all about what’s next for you?

I’m happily working on a new manuscript, to be published next year. It’s still historical fiction with two different points of view and lots of twists, but it’s also slightly different from my other books. Gotta keep my amazing readers on their toes!

I’m obsessed with the political climate for the book I’m working on now, which is set in the late 1940s and early 1950s, when people who’d done something as harmless as marched in a rally against fascism twenty years earlier, or signed a petition to protect refugees, were labeled un-American and a threat to the country. So many people had their lives torn apart, and the research is making me terribly anxious, but I think that’s a sign that I’m on the right track.

How about, “What has most surprised you about becoming a novelist?” Answer: That while writing is solo, publishing is a group effort and I’m lucky to have an incredible team behind me. Also, the depth of the community, support, and encouragement among readers, booksellers, and other authors. It’s been a marvelous ride.