Come on, who doesn't love physics? James Kakalios talks about THE PHYSICS OF EVERY DAY THINGS 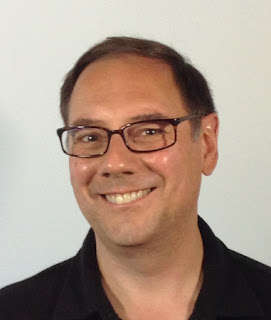 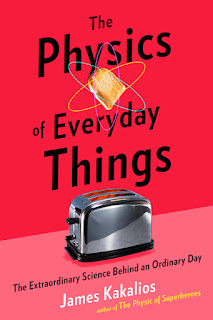 I love science. I truly do. I took this course called Physics for Poets in college and got hooked, so of course, when I saw this book, The Physics of Everyday Things, I had to read it and had to tell everyone on the planet. How does EZ Pass work? What about your toaster? It's all here, guys.

James Kakalios is a professor in the School of Physics and Astronomy at the University of Minnesot--and because his written bio is so wonderful, I'm using it. He has taught since 1988, and where his class “Everything I Needed to Know About Physics I Learned from Reading Comic Books” is a popular freshman seminar. He received his Ph.D. in 1985 from the University of Chicago, and has been reading comic books for much longer.

Why do you think so many people fear physics or just assume they can’t understand it?

I think many people are interested in science but are insecure about their ability to follow it. Part of that stems from abstraction. The concepts behind electromagnetism and quantum mechanics are a bit divorced from our everyday experiences. Few people are intimidated about classical mechanics, as we have plenty of experience with projectile motion (think of a long, forward pass of a football, that manages to reach the receiver running downfield). But few of us grapple with the motion of electrons inside an atom, for which a classical trajectory can not be assigned. Part of it also stems from mathematics – which gives some people hives. But to repeat – I think many folks are interested, and if can get past the abstraction/mathematics barrier, we can show how much fun it is to learn that the world is a knowable place.

What I so loved about your book is the very down-to-earth sense of wonder. I actually tried the experiment with raisins to learn more about gravity! Do you think that this could be a new way of teaching science in our schools? And how can we promote it?

Thank you for the kind words about my book.

Traditionally we teach physics in classrooms the same way we teach a foreign language – starting with basic principles (or verbs and nouns) and gradually building up to more sophisticated concepts (or sentences). This is tried and true – but as anyone who has learned a language this way can affirm, it takes quite a while before you can say or read anything beyond a simple level. The other way to learn a language is the ‘emersion’ technique, where you in essence are thrown into the deep end of the pool on day one. Progress is slow initially, but when you start to get it, your command of the language is much more natural and fluent. In THE PHYSICS OF EVERYDAY THINGS, I use the emersion approach, and start off which concepts that, in a standard course, would not appear until the end of the first or second year of study. But hopefully by the end, the reader will begin to ‘think like a physicist’ and start to anticipate and figure out for themselves how various devices operate (“I totally knew it was going to be capacitors!”)

When I finished your book, I was looking at life in a totally different way. So I have this vexing question—as science uncovers more and more information, is it possible that many models we have will be called into question? (I’m thinking that for years, it was thought that the atom was the smallest particle, and then suddenly, there were quarks!)

Writing the book, I found myself observing my interactions with technology, and paying attention to all of the devices we employ in an average day. It’s really striking how much this has all become part of our background, and it was fun working on the book to become alert to all of the physics surrounding us (quantum physics? You’re soaking in it!)

As to whether current models will be called into question in the future, I certainly hope so! Every time our understanding of nature has improved, it is because our existing models have proved unable to account for a vexing measurement or observation that motivates the development of a new model. This new model accounts for everything that the old model could, plus the new results. Oftentimes, the new model also accounts for why we thought the old model was correct.  In this way our understanding of the world (and beyond) advances. It is said that the most scientific phrase of all is: “Huh, that’s funny.”

There are many deep mysteries in physics, but one that has gotten under my skin, as a solid-state experimentalist for over thirty years, is the issue of disorder. When we talk about silicon chips in our computers and smart phones, we refer to crystalline silicon, where every atom is in a predetermined position. In physics, when a cubic centimeter of material can contain nearly a trillion trillion atoms, we exploit the symmetry of this crystalline arrangement (think about the ordered arrangement of sodium and chloride atoms in table salt) to greatly simplify the equations needed to describe the solid’s properties. But if the atoms are randomly located, as in an amorphous solid, then this simplification is not available. Think about two forms of carbon – diamond and soot. Diamond is a uniform crystal, while soot is a disordered solid. As physicists we know much more about the properties of diamond than we do of soot. And yet, diamonds are expensive precisely because they are rare, and the fact that you don’t give a soot ring to your beloved (not if you want them to remain your beloved) reflects this fact. As scientists, it would be nice if we understood the forms that nature actually takes, and not just those for which it is easy to solve the equations.

As to greatest science fact – I would vote for the fact that the world and universe are comprehensible, when studied using reason and observation. We are surrounded by the most amazing ‘magic show’ and through our intelligence, we have figured out how the ‘tricks’ are accomplished. We don’t have all the answers, and in some cases we don’t even know the right questions to ask, but we know how to interrogate the world to yield its secrets.

I feel like I am making some small progress in understanding disordered systems, and if I can add a brick to the wall of our understanding of this subject, I’ll be very happy.

Hmmmm. These were very good questions, and most I have not ever been asked before.  Oh, wait, I know..... where can people learn more about my new book?  And the answer is www.physicsofeverydaythings.com.