Turning tragedy into great art: Elizabeth Searle talks about WE GOT HIM, a novel about the Boston Marathon Bombings 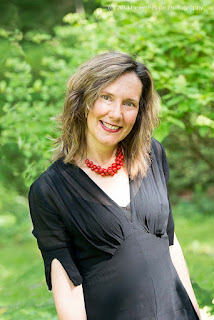 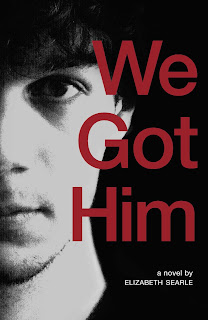 You know it's always fun to get to interview an author you admire--and have befriended--and I am so honored and delighted to have Elizabeth Searle here talking about her magnificent new novel, WE GOT HIM, about the Boston Marathon bombings. In it, Searle takes a very public tragedy and turns it into personal and profound art.  And could it be more timely?

Elizabeth is the author of Girl Held in Home, and the librettist of Tonya & Nancy: The Rock Opera (!!! How cool is that?). Celebrities in Disguise was a Finalist for the Patterson Fiction Prize; A Four Sided Bed was nominated for an American Library Association Book Award; and My Body to You won the Iowa Fiction Prize. A Four sided Bed is now in development as a feature film.

Thank you so much for being here, Elizabeth.


I always think an author feels haunted to write a particular book at a particular time. What was it with this book?

The 2013 Boston Marathon bombing manhunt took place in our ‘backyard’ — our town of Arlington was locked down.  Seeing on TV tanks rolling through nearby Watertown, where the house of friends was searched by police with assault rifles brought home how in today’s world, terrorism can show up at your own doorstep.  What haunted me most was the face of the surviving bomber suspect once he was captured (the title of my book comes from a ‘Tweet’ message from the later Mayor Tom Menino: “We got him.”)  As the mother of a son, I could not believe how this bomber was still a teenager.  The horror of that fact gripped me.

I already had two characters in my mind: a couple I’d written about in multiple short stories.  I had wanted to write a novel of their birth night.  But the story lacked the motor of a novel— until it hit me that I could set the birth on the manhunt night and that I could develop the character of the young wife Sarah’s troubled teenage stepson.  Since I was obsessed with the manhunt, setting the birth on that night of danger and death gave the whole story a charge and immediacy.  I found I needed to write on.

I loved that you took a massive tragedy and honed it down to the personal--making it the story of one particular family. Can you talk about how you intertwined the story of the bombing with Sarah's story?

Sarah is obsessed with birth, with her longtime longing for a baby.  Like many mothers to be, she is determined to keep her baby safe and to plan a perfect birth.  But the fears and tensions of the Marathon bombing— which she witnesses from afar— and then the wild-card reappearance of her unpredictable stepson combine to send Sarah into premature labor.  We all were struggling to keep our families safe the night of the manhunt.  With my characters Sarah and her husband Paul, I wanted to show this struggle intensified and magnified as they are forced to journey out into the manhunt chaos, terrified in different ways for both their sons.

The wonderful author Sue Miller says you create characters and then decide ‘what awful thing’ will happen to them.  With Sarah, her biggest fear is for the safety of her baby and of her family- so I was drawn to ‘test’ her strength in multiple ways.  I always need a character who is a ‘loose canon’ rolling around the deck of a story— Sarah’s stepson, PJ, who resembles the dark-haired younger bomber, gets pulled into the police manhunt.  So I found ways via PJ to directly connect my two main characters, Paul and Sarah, with the larger drama and tragedy playing out on their birth night.

How difficult was this to write? You live in Boston--were there moments when you felt so unsettled you had to get up and walk away from the computer?

Definitely yes it was difficult; I was very aware of treading on sacred ground in dealing with the bombing tragedy.  I made sure to research any detail connected to that.  I was lucky to get to talk firsthand to a police chief who’d taken part in the manhunt.  And yes, dealing with this material, I did need to back off from my computer regularly and pace around- or as my husband says, to lie on the bed and twitch.  As a reader, I look for writing that is intense.  So I am drawn to charged and ‘difficult’ material- but this material has extra personal meaning since Boston is my home.

How has your writing changed since  you first became a writer?

I’d say the biggest change is that about ten years ago I started writing theater scripts as well as fiction— it felt very freeing to me, like weights had been cut off my arms and legs, to tell stories via dialogue and action.  My earlier fiction is quite dense and descriptive.  After I started script-writing, my fiction got leaner and more action-packed, at least relative to those earliest stories!  My 2011 novel Girl Held In Home was meant to be cinematic in its style.  In We Got Him, I try to combine active script-style plotting with a bit more of my original interior descriptive bent.  A quote that inspired me early on in my fiction writings and still inspires me is something a critic said about Virginia Woolf: that she captures ‘the texture of a mind.’  I always try to do that and I also try to keep the outer story moving.  So it’s a balancing act— but I do feel in the last ten years I’ve developed a new bag of tricks I can draw from as a (still fledgling) script-writer.

Alas, I’ve been obsessed with this dreadful election— As I write this, my son and I have just participated in the big March in Boston on the day after Inauguration.  On a positive obsessive note, my 18 year-old son is my hope for the future.  He is obsessed with politics in our family tradition and he is heading to college in the fall to save the world.

Writing-wise, I’m obsessed an ongoing film project: an indie film company Creatrix Films and an LA-based producer are working to develop my first novel A Four-Sided Bed— a menage a trois love story— into a feature film.  We had a staged reading of my script at a theater in LA last year, starring the amazing Evan Ross of Hunger Games and Gia Mantegna of Under the Dome. As you’ve done with your novels, I’ve been lucky to write the screenplay myself— a whole new adventure/obsession, which is what we all need right about now!

Very kind of you to ask that question in itself!  Hmm: ‘What’s my next book’ is always a fun one to discuss.  This spring, an anthology I co-edited is coming out from McFarland Books— Soap Opera Confidential: Writers and Soap Insiders on Why We’ll Tune In Tomorrow as the World Turns Restlessly by the Guiding Light of Our Lives. (!)  My co-editor is my literary soul sister and fellow soap fan Suzanne Strempek Shea.  Stay tuned…

And thanks so much, Caroline, for inviting me into fabulous carolineleavittville!
Posted by Caroline at 9:23 AM

Always a treat to read what Elizabeth Searle is up to--as ever, something fresh and thought-provoking. Great to have her perspective on "We Got Him" --so bold in its subject and its telling. Like all great writers, she dares to use an unexpected lens to tell a compelling personal story.

THANKS Tammy for your kind words and I do like your phrase and concept: 'unexpected lens'! We need new and sneaky ways to approach the bizarre news stories of our times, truly Stranger Than Fiction. Cheers- E

Thank you, Caroline, for putting Elizabeth and her dazzling new novel in your spotlight here. I love interviews and what unexpectedly can come up. Elizabeth's noting that scriptwriting removed the weights, that's such a moment to read about. We never know what trying something new can do for our work and our lives. And your last question is always a smart idea - what does the subject also want to mention. I'd say that even if the result wasn't "Soap Opera Confidential." But I am glad that it was!