Amber Brock talks about A FINE IMITATION, type A planning, Neil Gaiman, history, writing and so much more 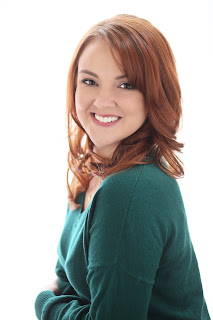 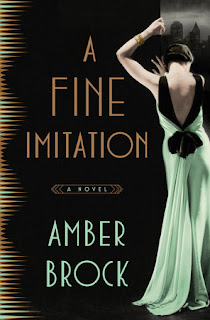 I'm partial to debuts, so I'm especially delighted to be hosting Amber Brock and her fine first novel, A FINE IMITATION. Just take a look at the high praise:

“There’s never a dull moment in this debut novel centered on an intriguing and tightly woven story line. Vera’s struggles are highly relatable, and the anguish she feels will resonate with countless readers. This surefire hit is certain to be beloved by fans of Beatriz Williams’s Along the Infinite Sea and Anton DiSclafani’s The After Party.”
– Library Journal, starred

Thank you so, so much, Amber for coming on the blog!

What was haunting you that drove you to write this novel?
A Fine Imitation started with a dream I had about a woman in a high-rise and her relationship with an artist painting a mural in her building. Still, even before I began to write, I knew I wanted to create more than just a good love story (though, of course, a good love story is nothing to sneeze at—I’m forever a fan of books that feature well-crafted romantic tension). But for me, because I teach at an all-girls’ school, I often found myself thinking of my students as I began to tease out important moments in my manuscript’s plot. I always ask my students to consider how the social conventions of an era shape a person’s opportunities and choices. In telling this particular story, I wanted to make some of the challenges that women faced in the early twentieth century come alive for my girls and for others. Even though my main character, Vera, is privileged in a lot of ways, she’s still very much restricted by what was expected of women in those decades, especially in her college years.

How does it feel to be a successful debut author? And does this make it harder or easier to write your next novel?
Being a debut author is overwhelming, amazing, scary, fantastic…a rush of emotion. I’ve dreamed about holding my own book in my hands since I was twelve years old, so the idea that my novel is going out into the world is still sinking in somewhat. I’ve found, interestingly, that starting the next novel has been similar to the start of the other unpublished novels I’ve written. There’s always some insecurity, but since my focus is always on completing the work (rather than the publishing stage), I’m dealing more with the specific challenges of the novel I’m writing. In some ways, it’s easier for me to tackle the writing when I’ve let go of the goal of publishing.

So much of your fine novel is about who we are and who we are meant to be. Can you talk about this, please?
We make a lot of decisions about who we want to be when we’re young, and early adulthood can feel like a “finish line” in a lot of ways. House? Check. Job? Check? Family? Check. We’re ticking off boxes on a list instead of considering what kind of life we truly want to pursue. Too often we let others choose our path for us, whether that’s because of parental pressure, societal pressure, or our own desire to create the sort of life that we imagine will earn us the admiration of people we respect and love. This is Vera’s struggle—she’s made all the “right” choices, but she’s not being true to herself. Once she recognizes that, she begins to re-evaluate everything.

A Fine Imitation is set in the roaring twenties, so I always want to know, what surprised you in the research? Did any of the things you discovered derail your plot temporarily, or open it up?
I always find myself researching the strangest things when I’m working on a novel. For one scene in A Fine Imitation, I needed to know how long a 1920s elevator would have taken to travel about twenty floors. I ended up learning more about the evolution of elevators than I ever expected. That’s one reason I love writing historical fiction in the Internet age—there are so many people who are experts in such fun subjects, and Google allows me to find their collected information in a way that wouldn’t have been possible only a few decades ago.

Running across an actual program from a 1923 exhibit at the Metropolitan Museum of Art was one particularly nice surprise. That discovery led to the inclusion of a painting (Portrait of Giovanna Tornabuoni) that added weight and meaning to the scene it’s in and eventually colored the way art is discussed in the novel.

What kind of writer are you? Do you have rituals? Do you map things out?
I am a Type-A planner by nature, so no one who knows me is shocked to discover that I have lists, plans, charts, and chapter outlines. I always handwrite those materials, so I have notebooks full of scribbles.

I usually prefer to draft in the summer. I’m a teacher, so that time is marginally less busy. But inspiration arrives whenever she’s ready, so at times I’m writing in the evenings or on weekends (or between classes!). And, as with so many writers, my best ideas come in those moments when I can’t write them down—in the shower, driving my car, and just as I’m about to fall asleep. I’ve honed my memory so I can capture as many of those ideas as possible!

Now and always—history. When I can steal a moment, I’m reading The Year of Lear by James Shapiro. Since I teach British literature, I’m always looking to learn more about Shakespeare’s work and the British canon as a whole.

I’m also researching the early 1950s in New York and Miami, and I continue to find it fascinating how seemingly minor events can continue to affect society long after most people have forgotten them.

What question didn't I ask that I should have?
What is the most surprising thing that influenced you as you were writing this novel?
I don’t think too many people would immediately connect my novel with Neil Gaiman and Terry Prachett’s cult classic Good Omens, but that book (which I love and teach) changed the way I think about how a novel’s conclusion should work. As I read the first time, I kept thinking, “There’s no way they can pull this off.” That was the last time I underestimated them. They set up an impossible choice between one potential outcome and another, then concluded with an outcome I never saw coming. When I found I’d given Vera a similar impossible choice, thinking of Good Omens freed me to consider other endings for her.