Yvonne Prinz talks about her astonishing YA, If You're Lucky, mental illness, and who decides what's real?


Okay, you know how they always say you can't be friends if you just know the person on social media? So, so not true. That's how I met Yvonne Prinz and I am telling you, we must have been sisters in a past life. We love the same things, especially movies, and whatever Yvonne tells me to watch, I immediate do, because she's got an instinct for greatness.  She's the co-owner of the uber-cool Amoeba Music and the author of All You Get is Me, The Vinyl Princess, Still There Clare, Double Dare Clare, Not Fair Clare. I'm absolutely jazzed that Yvonne and I now share the same publisher, Algonquin! And I'm thrilled to have her here to talk about her haunting new novel, If You're Lucky. Thank you for everything, Yvonne. 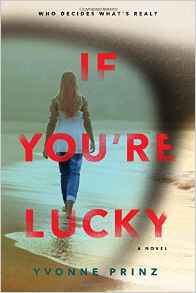 I always have to ask, what sparked this book? What was the thing haunting you so you felt you had to write this?

There were several things that came together in me to write this story. Over many years of working on Telegraph Avenue in Berkeley I noticed that a lot of the homeless people showed signs of Schizophrenia. After some research I found that approximately 200,000 individuals with schizophrenia or manic-depressive illness are homeless, constituting one-third of the approximately 600,000 homeless population in the U.S. That’s a staggering number and indicative of a broken system. I read a lot about the illness and I felt that it would make a great book if I could somehow incorporate it into a thriller. I wasn’t looking to write a Gone Girl type of book, I wanted to write something that could get a little more inside the head of a schizophrenic.

I love the northern California coastline. As you travel north toward Oregon on Highway 1, the hamlets become increasingly secluded but so beautiful. The fog blankets that coast almost every day in the summer. I’ve long wanted to create a story around one of these hamlets and I felt this was the perfect story to place there.

I watched an Andy Griffith episode called “The Stranger” where a man arrives in town and he seems to know more about the locals than they’re comfortable with. He wants to make it his new hometown. Turns out he subscribed to the local paper for years. Of course Andy steps in and makes the folks in Mayberry feel ashamed for not embracing the guy. I kept thinking about  working with this theme but then I arrived at a version where the stranger is loved by everyone in False Bay, (because their prodigal son has just died and they are vulnerable), everyone, that is, but my main character, Georgia.

What I particularly loved about this book--among many things--is the whole issue of Georgia taking meds to still the voices in her head. And when she stops, to try and solve a crime--she can never be sure if her interpretations are real or the result of her hearing voices again. It was chilling, real and moving. And Georgia is just a brilliantly realized character. Did you do research on this?  What surprised you about it?

Schizophrenia, I found, is a very difficult illness to treat. What works for one person might not work for another. Also, schizophrenics are notorious for going off their meds because of the negative side effects or because they don’t actually believe that they’re ill. I was very moved by a couple of TED talks, and a book written by a teenage schizophrenic. All of these people were incredibly bright and all three had been off their meds at one time or another and the results were disastrous. I wanted to give my character a solid reason for wanting to get off her meds.  Georgia believes that her dead brother is trying to tell her something important and she can only hear him if she’s un-medicated. This seemed like a perfect jumping off point for the abyss she eventually falls into.

The most surprising thing I discovered in my research is the number of people who struggle with this illness and how little it’s talked about and how misinformed the general public is about it. Writing this book created empathy in me for people who endure the illness and especially toward the schizophrenics who are homeless, undiagnosed, un-medicated, and live that nightmare daily. The most important thing I learned that I would hope to impart on my readers is that these people are hardly ever dangerous except to themselves. The media has created a lot of misconceptions about this.

I also love the tagline on the jacket--Who Decides What’s Real? It’s really a book about trusting yourself, no matter what anyone else says or thinks, isn’t it?

Yes. In Georgia’s case though, the struggle to make people believe what she’s convinced is the truth is almost insurmountable because of her past reputation for not trusting strangers and her tendency to fabricate stories about newcomers. She’s the ultimate in unreliable narrators. As a reader, you want to believe everything she tells you but…

What kind of writer are you? Do you outline and map things out, or do you just sort of follow your pen?

A bit of both. I start with an outline. I write elaborate character sketches. And then I start building. I rarely stick to my outline and I often write secondary outlines as I go just to keep myself somewhat on track. My books never turn out how I initially visualized them. This is especially true for “If You’re Lucky”. I did eleven complete rewrites on it. It’s the only book I’ve ever cried over (out of self pity mostly, but also frustration) My editors at Algonquin had some fabulous insight and really helped me find the best way to tell this story. I am so grateful.

You’re also the owner of the very famous Amoeba Records and you’re a film buff.  How do those two impact your writing--and your writing life?

I’m not sure this is because of Amoeba or because I’m just generally a music person but I write to a soundtrack that plays in my head, not a musical score but real songs. I often stop while I’m writing to find a song that speaks to a scene. I listen to it a couple of times and get back to work. It’s like my writing adrenaline. Also, every one of my books has a musical element. In “If You’re Lucky” it’s Gypsy Jazz. My character Fin is the son of a famous Gypsy Jazz guitarist and this has a strong bearing on how Fin came to be what he is.

The film buff thing is torture. I write (and rewrite) overly cinematic scenes. I inevitably have to shave them down but ultimately I think it’s a good thing to have great films running through your head while you write. I am annoying in my conversations with people about film. I honestly don’t understand people who don’t go to the movies. Who doesn’t want to escape for two hours? I certainly do.

I obsess over everything. There is no such thing as mild interest in the way I live. If I read a good author I want everything they wrote, same with music, art, photography, film. Even a color, when I like it, becomes an obsession. Right now I am also obsessing over a YA novel rewrite, which will hopefully be finished by the time people are reading this. My character is a violinist in a Celtic Punk Band so there’s a lot of listening to music. Her baby brother is autistic so that too is consuming me these days. I’m also an obsessive food forager, but I think that’s healthy (maybe?) If you tell me what you are looking for food-wise, I can probably find you a source, no matter how exotic it is. There is an actual food forager job these days: People who source foods for chefs. This is what I’m going to do if no one likes my book. I will be the best damn food forager in the nation and possibly the world.

You’ve been away from the world of YA writing for a while. How does it feel to be back?

I feel like the old dancer in A Chorus Line who says “Can the adults smoke?”

And finally, when are you coming to visit?

Soon, Darling, soon. And we’ll tear it up. We’ll hit every movie theatre in every borough.