Dzanc Prize winner Jen Grow talks about My Life as a Mermaid, swimming, underwear, writing and so much more 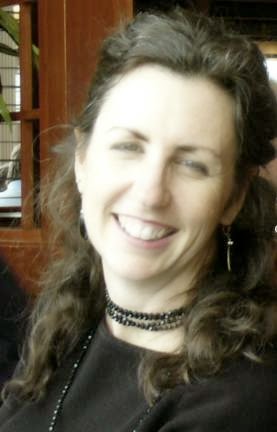 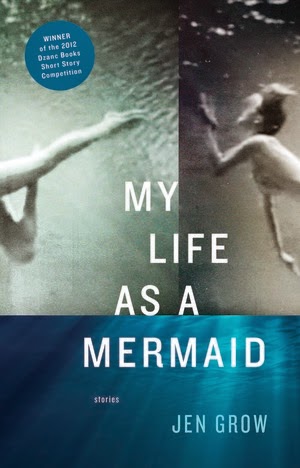 What's more exciting than a new exciting of short stories? Jen Grow is the fiction editor of Little Patuxent Review. Her writings have appeared in The Writer’s Chronicle, Other Voices, The Sun Magazine, Indiana Review and many others including the anthology City Sages: Baltimore. She’s received two Individual Artist Award from Maryland State Arts. My Life As a Mermaid (great title, right?) is about what really lives under the seams of "happily ever after" and it's just plain brilliant. Thank you so much, Jen, for being here.

Now that you won the prestigious Dzanc prize (congratulations and so, so deserved!), what’s the impact on your new work?

Thanks, Caroline. The award has invigorated my writing and encouraged me to return to fiction. I’ve been writing nonfiction recently, finishing up a memoir and writing some personal essays about the death of my father. This award has given me the incentive to pick up my novel draft, dust it off, and revise. It’s also sparked a few new stories and has got me thinking about the direction for another story collection.

So much is about timing. “Is it too late to smile?” one character asks. In another story, a character remarks that the neighborhood “eventually gets better, years later, but we don’t know that yet.”  Do you think that those who are trapped can ever manage to turn time to their advantage?

Yes, but when you’re in it, when you’re the one who is stuck, it feels like things will never change, that time is working against you. I just read the Bob Dylan interview in AARP and he said something that struck me, “Time has to be your partner… time is your soul mate." I think it’s an ongoing dance to learn how to make friends with time and get it to work for you.  I get stuck from time to time, as we all do. A situation will come along and knock me off course for a little while. I get things I don’t want or fail to get things I want. There is a recalibration period that varies from situation to situation, from person to person. But there’s always something else coming, another idea, another mood, another insight. For me, being trapped is less about time and more a matter of perspective. The amount of time it takes to become unstuck is in proportion to how slowly or quickly I can shift my perspective. Of course, if you can’t make that shift, then you do stay trapped. So, yes, it’s possible to turn time to your advantage, but it’s not a given.

A lot of the stories have to do with water, which fascinated me. Even the cover, which is beautiful, shows two bodies under water.  There’s that sense of floating through life, and not really being a part of it--at least for me. Could you comment?

I really like to swim. I turn into an eight year old kid when I’m near a body of water. Even now, forty years later, I still do this weird thing where I sort of plop headfirst into the pool so I can feel disoriented for a few seconds. I do it on the sly now, because let’s face it, I’m a middle-aged woman and it’s embarrassing when kids and adults ask me if I’m trying to teach myself to dive. And also, I swim where Michael Phelps and other Olympic athletes train. The pool is full of serious, vigorous swimmers, and then there’s me on the side, doing my head-plop into the water. Just so I can get dizzy and momentarily separate myself from the world. The muffling effect of water is such a great thing! That says way more about me than I probably should admit, but you’re right about my characters floating through life without being a part of it. That’s me, to some degree, a fish trying to describe water. Monet’s impressionism, I’ve heard, was born partially out of his nearsightedness. Maybe my writing is the same: I have blurry, aquatic vision and so I describe the world as I see it.

I really want to ask you about how you write, since these stories are all so brilliantly crafted. What sparks a story for you? How do you write? Do you have rituals? Do you outline?

My favorite part of writing is revision. Each pass through a story takes me deeper and deeper to mine for the rubies. That’s on the good days. Other days, I compare my process to sculpting. Years ago, I used to be a figure model in art classes, and I’d watch the students build clay sculptures on armatures. For hours, they’d add and subtract clay, sometimes to the same spot. They’d shave a little off, then re-add it, smooth it over, and then shave it off again. That that’s how I write. I start small, with just the bones, and build up. I go over each line again and again. Moving a word, putting it back. I’m a slow writer because of it, and perhaps and an obsessive writer, but that’s how it works for me.

Sometimes I wish I could outline my stories. Maybe I’d be a faster writer that way, able to produce, produce, produce! But my stories are intuitive constructions. I don’t always recognize the patterns and connections that my mind is creating. An early reader for my story “Camera Obscura: Light Seeps In” asked me, “What’s with all the underwear? You’ve got all these characters running around in their underwear.” I didn’t even see it. It wasn’t intentional, but it was right. I needed the characters to be exposed and vulnerable at an emotional level.

Also, I try to write a little bit everyday, even if it’s just ten minutes before I go to bed, even if it’s just to change one sentence. It keeps the piece alive in my head. These daily increments are punctuated by binge weekends where I go away and write for ten hours a day for a couple of days in a row. I actually prefer binge writing and would do it all the time if I could sustain it, but there’s always the rest of life that needs attention. The dogs need to be walked and somebody has to cook dinner.

I’m afraid you’ve opened the floodgates with that question.

First, I want to finish my memoir. That’s definitely an obsession. I’ve been working on it for five years and I feel a need to be done with it. But the more I try to finish it quickly (I’ve officially finished it five times already) the more I realize that rushing doesn’t serve me well.

Also, I’ve been fascinated by the grief process. Unfortunately, it’s developed into a terrible knack for cornering friends at literary events and talking about the difficulty of losing parents and cleaning out their homes. I can’t stop myself. It’s like I have Tourette’s and keep blurting out the word ‘death’ at inappropriate times. I had to promise one friend that, next time, I’d talk about dogs instead.

I’m also obsessed by a homeless guy in my neighborhood named Danny. Danny used to live in a wooden shed behind a neighbor’s house, but he got mad at the neighbor and is now living in the woods in a tent. Actually two tents, one inside the other, covered by a tarp, surrounded by a wind proof fence, dug into the side of a hill. My husband and I have offered to let him stay in our basement when the weather is bitter cold or it’s snowing, but Danny doesn’t want to leave his cats, which I completely understand. (And since we’ve got two dogs and two cats of our own, we can’t accommodate three or four more animals.) Other people have invited him and his cats inside, but he doesn’t want to move. He’s stubborn but also resourceful, a hard-working, helpful guy who knows everything that’s going on in the neighborhood. So all of us, even the police, are looking out for him. We gave him kerosene and candles for Christmas. He gave me a bracelet that he found. There’s more to this that I need to write.

And West Virginia has been calling me. I read this beautiful and important book by Erik Reece called Lost Mountain about mountaintop removal. That has inspired me to set a novel or some stories in the coal country of West Virginia. Lost Mountain, the actual mountain, is in Kentucky, but since I’ve spent more time backpacking in West Virginia, I’m drawn to it as a setting. Now, of course, the decimation of mountaintop removal is coming to other communities across the country in the form of fracking. And that’s led me to think a lot about energy consumption, erosion, consumerism, mass extinction, elephants dying—you know, really light-hearted stuff.

How about this: What’s the most surprising thing this book taught you about yourself? I was completely surprised to realize how I’d been drawn into the national conversation on social justice and equality while I was writing these stories. I had no idea I was writing about voiceless characters. Then a pattern emerged (like when my friend said, “What’s with all the underwear?”) and I couldn’t deny it. That’s the mermaid, right? On dry land, without a voice.
Posted by Caroline at 1:26 PM