Aline Ohanesian talks about Her Number 1 Indie Pick, Orhan's Inheritance, the power of memory--and words, and so much more


Orhan's Inheritance is Aline Ohanesian's miraculous debut, about history and memory and it's already creating a sensation.

In a starred Kirkus (harder to get than finding a diamond at your feet), a critic raves, "A novel that delves into the darkest corners of human history and emerges with a tenuous sense of hope." The book is a Number One Indie Pick and a Barnes & Noble Discover New Writers Pick.  Her writing was a finalist for the PEN Bellwether Award for Socially Engaged Fiction and the recipient of a Glimmer Train Best New Writers Award. I'm thrilled to have her here. Thank you, Aline. 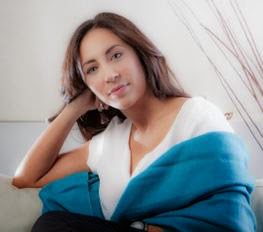 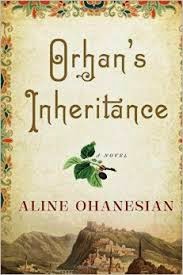 Every novel has a moment of origin, which I always find fascinating. What sparked the writing of this particular book?

I get a little shy when I'm asked to talk about this because for the most part, I'm a real "normal,"  level-headed person, but the moment of origin for this novel was so out there. I was resting after a sleepless night with my baby when I heard a voice. I could tell it was female and I knew she was old. She said only a few sentences about the futility of words. How they take an event and immediately corrupt it with meaning. I love words and language. I would never say or think something like that. I wrote what I heard down on a scrap piece of paper. I wanted to know who she was and why she didn't want to talk about things. In many ways the whole novel is a pursuit of that woman's voice and story.  I never heard anything after that. Not like that.

So I started constructing, using my imagination, but also using the stories my great-grandmother Elizabeth told me about her own experiences at that time. Both my paternal grandparents were also survivors. I wanted to honor them by telling their  stories. What's really kind of miraculous is that seven years later, when I got my first review by Kirkus, the reviewer used only one quote from the book. It was the same two sentences that came to me all those years ago. Writing is a lot like construction. There's a lot of structure and thinking involved but in the best of circumstances, there's also a great deal of magic and mysticism.

I’m always fascinated by the way writers write. Can you please talk about your process? Do you have rituals? Do you outline? Or do you wait for that pesky muse?

I'm not one of those writers who thinks about her word count. When I know I want to write about a particular subject, I start doing a lot of associative reading. I read history books to make sure I know everything I can about the time and place I'm writing about. There's a lot of research involved in writing historical fiction. Fortunately, I have a masters degree in history and I love doing research. Once I know all I can about the political and social landscape of the novel, I put all that aside and focus on the uniqueness of the particular characters I'm exploring. I make a rough outline but I reserve the right to abandon it if the characters dictate it.

So much of the novel is about the power and purpose of memory. Why should we remember when it causes pain? How can memory save us in some ways? And when should the past inform the future?

These are such great questions! I think stories are the most basic units of human understanding. If you think about it, we use words, language and stories to understand ourselves and the world around us. Which stories we choose to remember and which we choose to forget have an impact on who we are both as individuals and collectively. Two siblings from the same family often will give you two different versions of that family's past. Why? Because they remember differently.
I happen to believe that the past informs the future whether we remember it or not.  That doesn't mean we don't have any power or agency. As individuals, we may be products of our past, but we don't have to be prisoners of it. When your talking about a collective past or a national past, things get even trickier. A nation is defined by what they choose and not choose to remember. What would the US look like if we refused to acknowledge slavery or Japanese internment camps? That's the situation in Turkey. For a long time, almost one hundred years, it was illegal to remember the stories I'm telling in this novel.


“Words corrupt everything with meaning,” one character says, and while you could argue this is true, isn’t it also true that they unveil meaning?

I love words. What writer doesn't? They are so much more powerful than we give them credit for. Words are the building blocks of existence as we know it. There's a great quote by the philosopher Martin Heidegger that says, "Language is the house of being. In its home man dwells. Those who think and those who create with words are the guardians of this home." So you and I and the historians but also just anyone who wishes to tell any kind of story, even verbally, are the guardians of this house of being. Everybody who speaks or thinks creates their world with words, but those of us who are read / heard widely have a greater responsibility. We have to be more conscious of what stories we choose to tell and why. And as far as the characters go, I think by the end of the novel, almost every single one of them come to the understand the power of  words.

Orhan actually inherits much more than a business. Can you talk about this, please?
Poor Orhan. He's such a decent guy. He inherits the business but it comes at a considerable cost. I wanted him to inherit the knowledge of his family history and his country's history. To be a fully formed individual, he has to take the good and the bad. By the end of the novel, he's no longer apathetic about things. Once his eyes have been opened to the past, he can no longer be complacent.

You’ve had an extraordinary debut--widespread praise, a fabulous publisher, starred reviews. Does this make it easier or more difficult to write your next book?What’s obsessing you now and why?

When I started writing this novel, I had never taken a writing course and I didn't know a single person in publishing. So it will be easier in that I don't have to  find an agent and I probably don't have to worry so much if the next one will sell.  I started writing the second novel way before any reviews or praise came in so I know that the writing part of it will be the same: blissfully satisfying one minute and terribly difficult the next. I try not to obsess about things in real life, because I've learned I have no control over that but I'm extremely obsessive when it comes to my subject matter. When I was writing ORHAN, I talked incessantly about the characters as if they were real. I wanted to know absolutely everything from that time and place. What did the soldiers eat, how did Lucine's mother bake bread? It got so bad that my young sons would mention my characters by name in casual conversation. Right now I'm obsessing over 19th century California, which means I spend all day reading and thinking about Franciscan priests, Mexican nationalists and the Gabrieleno Tribe of Native Americans.

Which character did you love writing about the most?
I love Fatma. She's hilarious and cunning. She's a lot like the feisty women in my own community. They are feminist without ever knowing that word. Plus, the idea of this funny aging former prostitute in the middle of a devout muslim community was irresistible. I could write a whole book from her point of view but it would be a VERY different kind of book.