The incredible Kevin Brockmeier talks about A Few Seconds of Radiant Filmstrip: A Memoir of Seventh Grade, why that grade is so traumatic, and why he'd rather be a leprechaun than a bumblebee 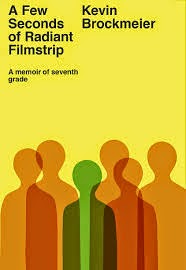 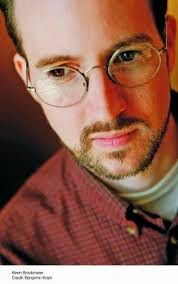 The most wonderful thing about this blog for me is getting to talk with my literary heroes and heroines. Every book by Kevin Brockmeier is unsettling, strange, and impossible to forget. From The Truth about Celia, to The Brief History of the Dead, to the Illumination, he challenges the way we see the world. His latest, A Few Seconds of Radiant Filmstrip: A Memoir of Seventh Grade, catapults us all back to middle school with time-machine perfection. And Kevin? I'd rather be a leprechaun, but would you rather be a man with the brain of a chimp or a chimp with the brain of a man?

I've worshipped all of your novels, which usually have this eerie, almost otherworldly quality, but this particular memoir is heartbreakingly honest and to the point. So did you have to curb your impulse to have something strange happen in it?

Thank you, first of all, for your kind words about my novels. Strangeness does seem to be an abiding source of inspiration for me. I considered various alternate approaches to the material in A Few Seconds of Radiant Filmstrip, but ultimately I decided that the best way to reveal the story was to assume a single perspective—mine, as it existed some 28 years ago—and to approach the events of that year as simply and forthrightly as I could. That said, I did write the memoir in the third person and the present tense, itself a strange choice, but one that I hoped would allow me to make the book not only as candid but as tensile and suggestive as I wanted it to be. And there’s also a middle chapter that, while very intimate, very revealing, is largely divorced from the ordinary mimetic currents of the book—something on the order of autobiographical science fiction, and definitely a case of something strange happening.

Why do you think seventh grade is such a benchmark for everyone? And how were you able to remember so many of the details that so many of us would rather forget?

So many of the people I’ve spoken with about this book have said, “Seventh grade! Seventh grade was awful.” It was certainly the hardest period of my own childhood—the first year of middle school rather than the second where I come from, and a year when some of us were walking around inside the bodies of adolescents, some of us inside the bodies of children, and when those bodies didn’t necessarily correspond to how we were experiencing our minds. I felt buffeted by all the changes in my life and—well, I was going to say unusually delicate, but I had always been unusually delicate, I was just newly aware that it was something I was supposed to have outgrown. It’s worth pointing out, though, that the kind of bruised self-consciousness I’m talking about makes you as penetrable to pleasure as it does to trauma. I’m thinking of something Virginia Woolf wrote about Lewis Carroll: “For some reason, we know not what, his childhood was sharply severed. It lodged in him whole and entire. He could not disperse it.” Seventh grade, for whatever reason, lodged in me whole and entire, and I’ve never been able to disperse it.

I love the line, You're not me yet, but I'm still you, which encapsulates precisely what it feels to be in 7th grade. Care to talk about that?

That line was in place well before I began writing the book. It was a phrase I found myself turning over one day while thinking about my long-gone childhood, and I knew immediately that I would have to write a memoir about seventh grade and that those eight words would constitute the final sentence. Within its context, the line reveals three layers of personality: my younger self, addressing a younger self of his own, both of whom are secretly being addressed from the far future by me. I’ll say, as well, that I think there’s a difference between stories that move away from their beginning and stories that move toward their end. A story that moves away from its beginning is like an acrobat who’s been thrown into the air and is reaching with all he’s got for the rung of a swing. A story that moves toward its end is like a diver who has leaped from a platform and can rely on gravity to carry him to the water. Many stories travel away from their beginning initially, then turn at some point and start traveling toward their end, and A Few Seconds of Radiant Filmstrip is a story of that type. For roughly the first half, until its strange middle science-fiction chapter, the action is propelled upward from the situation established in the opening pages—a set of friendships that can’t possibly last—and then suddenly the balance shifts and everything begins to gravitate toward the final sentence.

Can you talk about your writing process, as I'm deeply curious.

I tend to think in metaphors of shape. I might not know exactly how a book or a story will look once it’s finally published, but I do know something about its general configuration: some scheme or intention of form by which the narrative will have to abide if it’s going to function properly. I thought of The Illumination, for instance, as a set of six transparencies, each nearly the same size and containing its own seemingly abstract fragments of line and color, which finally, when layered one on top of the other, would reveal a single complete image. A Few Seconds of Radiant Filmstrip was like a seesaw, weighted at its ends by the first and the last days of the school year, and pivoting atop that odd speculative chapter in the middle. So I usually know the architecture of a project before I begin writing, and I also know the title, which I think of as the target toward which I shoot the arrow of the story. What I always say is that with those features in place, and with the presiding notion of the story firmly in mind, I start at the beginning of the narrative and proceed very slowly, broaching my sentences one tiny piece at a time, termiting away at them until I’m satisfied that they present the right effect and doing my best to complete each one before I move on to the next.

What is obsessing you now and why?

An idiosyncratic list: Octavia Butler’s story “Bloodchild.” Russell Hoban’s novel Turtle Diary. David Sylvian’s album Secrets of the Beehive, particularly the way he pronounces the word “inexorably” in the song “The Devil’s Own.” The clarity with which Hayao Miyazaki’s The Wind Rises depicts things like an earthquake rolling across the landscape, and smoke swirling through an airplane’s rotors, and headlights cascading along a brick road. The worry that I might have said something in class last week that hurt one of my students. My sore throat. The cold weather. The playlist for my nephew’s annual birthday CD—his tenth. That joke which goes, “Who are the two filthiest animals in the barnyard?” and finishes, “Brown chicken, brown cow.” The forthcoming books by Kate Bernheimer and Gonçalo Tavares and Nick Harkaway. The forthcoming album by Jarle Bernhoft. The package in my stairwell that’s addressed to someone who doesn’t actually live in the building—who is he, and how can I get it to him? The idea of writing a blurb that ends “Don’t quote me on that.” A movie clip I saw in which the male romantic lead says to the female romantic lead, “You came just in time,” which I’m convinced always means, “You came too late.”

How about a question I should be mortified for proposing you might have asked? A friend and I, following the twists and turns of a conversation, ended up devising the consummate weird post-reading question: “Which would you rather be: a bumblebee or a leprechaun?” It’s ideally nonsensical, and yet I’m betting that most people would have a reflexive answer—and while the answer might not be so revealing, the reflex itself, and figuring out what it suggests about you, might be. (I would rather be a leprechaun, by the way.)
Posted by Caroline at 4:57 PM