The divine Meg Pokrass interviews the sublime Bill Roorbach about why books are alive, Life Among Giants and so much more 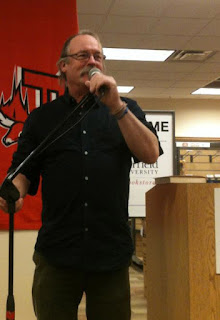 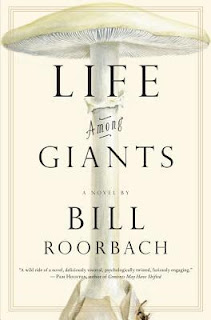 Life Among Giants is one of my favorite books of the year and I'm so thrilled that Meg Pokrass in interviewing the author, Bill Roorbach. He's penned eight books, including the Flannery O'Connor Prize and O. Henry Prize winner Big Bend, Into Woods and Temple Stream, and his craft book, Writing Life Stories, is used in writing programs around the world. Recently Bill was even a judge on Food Network All Star Challenge, evaluating incredible life stories cakes. . His work has been published in Harper's, The Atlantic Monthly, Playboy, The New York Times Magazine, Granta, New York, and dozens of other magazines and journals. A comic video memoir about his tragic music career, "I Used to Play in Bands," and all kinds of other work, including a current blog on writers and writing and just about everything else (with author David Gessner) is online at www.billanddavescocktailhour.com.  Thank you so, so much, Bill and Meg!

BR: It still really amazes me how people emerge as soon as I start writing about them.   In this case, I got a kid named David “Lizard” Hochmeyer talking, telling a story I had no idea what it would be.  He was smart, personable, huge, a great athlete, nothing like me, except in his interest in dance.  Which in his case has to do with a world-famous ballerina who lives in a mansion across the way.  He goes over there to rescue her and fate is unleashed.  So then I have to find out who she is.  It all happens in the process of writing, since I count the daydreaming before and during the making of the book part of the process.  And Life Among Giants has a lot of characters from all kinds of backgrounds.  I built them from scraps in my head, bits and pieces of all the people I’ve met, my own emotions, my own experiences, experiences I’ve heard about, read about, mused.  Much comes from research, though never immediately.  Lizard ends up in the NFL—I had to study to get some sense of what that life would be like.  He’s a chef in the end.  I worked in restaurants and love to cook, so I had some clues, but really Lizard had to tell me what it was really like, and he was glad to.

MP: So, maybe your brain is full of people you know, or have met, or have seen glimpses of.  Maybe some people are real and others are absorbed over your lifetime from books or movies?

MP… and all of this mixes with who you are and the way you see. I love the idea that you are coaxing your characters out in the process of writing them. This leads me to think we are all far more multifaceted than we know we are, and only as writers when we sit down to write does this actually become clear.  Your brain is like a big world.

BR: : It’s a big multi-media machine, and we are the original cloud.

MP: Have you had mentors in your writing life at different points? Can you talk about the importance of mentors here a bit?

BR: I don't know what it is with me and mentors.  I have always resisted them and so never really have had a long-term mentor.  Great teachers, though.  One in college told me I’d never be a writer, and that’s what made me a writer.  Philip Lopate was a big influence in grad school, got me writing personal essays, oddly in a fiction class he taught.

MP: Who are your heroes?

MP: Who are your favorite filmmakers?

MP: What makes us love (not just identify with) a character/ a voice?

BR: I don’t know, of course.  But I think it’s similar to what makes friendship possible: vulnerability, and something in return.

MP: Giants on the Road: How has your book tour been? Please give us highlights and terrify us with stories about the first leg of this journey.
BR: This tour is nuts and great, so old-fashioned.  i feel so lucky and exhausted.  Highlights have been Big Hat Books in Indianapolis, so fun and cozy, with bottles of wine and good talk beforehand, and a low-key talk.
Plus, my second cousin Gay Burkhart turned up.  She said my late mother was the funniest woman she ever met.  She is the granddaughter of my grandfather's older brother.  And looks a little like my mom.
Low point was probably Dayton, Ohio, where I don't know anyone and where I had the wrong address for the store I was supposed to talk at, ending up at a mall with no bookstore at all!  Scramble, scramble and I barely made it to the right address on time.  And no one there.  But then turn up a couple, the female of which is the sister of a FB friend of mine, all the connection we needed to go out and have a drink after, lifesaving.  The next morning to Miami, which was great.  Then, two days offish and time with my old guitar friend Jonny Z, plus swimming and biking and general debauchery.
Next up to Atlanta, where lots of my family lives.  Fun!  And a great talk at the Georgia Center for the Book, great crowd, given all the family, but also a big glowing full-page review in the Atlanta paper.  Boston a couple of nights ago, or Andover, actually, Boston area, really nice store in a really nice town.  Then home, with a couple of stops to sign books informally at stores I'm happy to say had books to sign!  Home to 12 hours sleep, which I haven't done since I was 12 months old.

MP: Well, all of this sounds terribly lively. Bill, books are DEAD, aren’t they?

BR: Books are alive.  They are just hiding.  Though they recognize their allies and emerge just when we need them.
Posted by Caroline at 10:28 AM