The hilarious Johnny Pigeau of Backbeat Books & Music talks about rewriting the Bible (and a novel, The Nothing Waltz), math problems, selling books and so much more 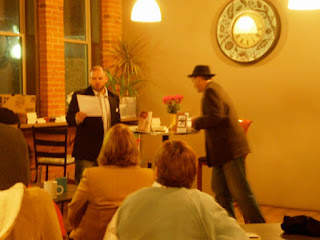 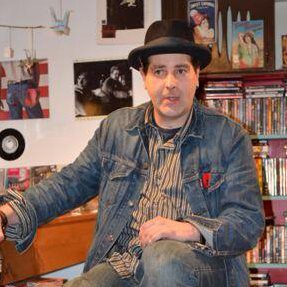 If someone is hilarious and irreverent, they usually go to the top of my list--and that would describe Johnny Pigeau, owner of Backbeat Books & Music, in Perth Ontario, (6 Wilson Street W, Perth Ontario,  K7H 2M5) a fabulous store that sells books, vinyl, CDs, DVDs and off-the-wall gifts. I so liked the way he formatted the interview that I left it alone. And I deeply appreciated his attempt at my math problem. Thanks, Johnny!

YOU: And finally, if a train going 60 miles an hour is heading west and another train going 3.5 miles an hour is heading southwest, at what angle will the two trains meet?
ME: Don’t trains go a lost faster than 60 miles an hour? They certainly boogie around here. I like riding the train. See lots of pretty girls on the train. Also, peeing while standing and not soiling yourself in one of those tiny washrooms in a speeding train is quite a feat! Proud to say I’ve accomplished that numerous times. At all sorts of angles.
Posted by Caroline at 2:50 PM