The fabulous Abby Frucht talks about her new story collection, The Bell At The End Of A Rope, being--or not being--strange, writing, publishing, and so much more 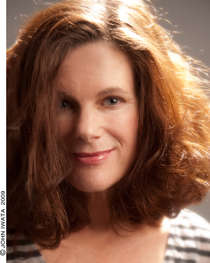 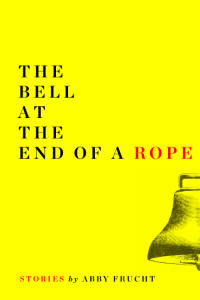 I knew and loved Abby Frucht's work before I  knew and loved her.  Fruit of the Month, Licorice, Are You Mine?, Life Before Death, Polly's Ghost--all are books that are dog-eared from rereading. Abby's won two National Endowment for the Arts Fellowships, A New Voice Award from Quality Paperback Club,  and several citations for notable books from the New York Times. She also teaches in the MFA Writing Program at Vermont College of Fine Arts. I'm so jazzed to have Abby here on the blog today. Her new collection The Bell at The End of a Rope is spectacular--and so is she.  Thank you, Abby.

What I loved so much about this collection was the strange, eerie quality, that reminded me of your novel Life Before Death. So I have to ask about your world view. Have you always seen the weird side of life?

When I first read this question I thought: What she’s really asking is, Am I strange?  (Caroline: For the record, I adore Abby and I gravitate to these things, so this question is actually a high compliment.) So I asked some of the people who know me best, “On a scale of one to five, with five being the strangest and one being the most normal, how strange am I?”

My friend Kathleen, who I love FOR her strangeness, rated me a 1.
“You’re not strange at all!” she said.  “You’re a great mother, you have a good job, you dress well, you drive safely (I was in the process of driving her to Madison when she said this, she being not a safe driver at all,) and you’re a great friend.  You even came up with a name for my new stuffed pink dog.”

I next asked my son Jess, whom I admire for his groundedness, his reasoned forthrightness, and his ability to tell me roughly how much money my ex husband has made in the stock market.  He rated me a 4, citing what he called my intelligence and my “unfilteredness.”  Because  “Unfilteredness” is not a word he ordinarily uses, I assume it emerged from a conversation he had with his fiancée last week after I met her parents for the first time.

When I asked my son Alex, who is unusual in several ineffable ways, he said promptly that I am a 3.8, but when I asked him to explain, he said, “I don’t know,” and, knowing him well enough to know that if I asked again, he would only grow impatient with our telephone call, I didn’t ask again, after which he promptly surprised me by asking when I was coming to visit.

Finally I asked Chuck, with whom I have lived for twelve years.
“You’re not strange,” he said.
“What do mean I’m not strange?” I said.
“Oh.  Would you rather I said you were?” he said.
I pretended I didn’t hear that question, and he didn’t ask it a second time.

The only other way that I can answer this question is that it always interests me when people respond to what they call the weird things in my stories, since, to me, a lot of the things aren’t weird at all, they’re normal.  My sister Liz understood this best when she rated me a 3, explaining that most people are 3’s because most people are weird.  I aruged that didn’t make sense, because if everybody were a 3, being weird and being normal would be identical, to which she said, “Yeah, that’s what I’m saying.”

You’ve written both short stories and novels--is the process different for you? Do you prefer one of the other? Or since, these wonderful stories are all sort of linked thematically, does it feel like writing a longer piece of work?

Aside from the stories all having something to do with childhood, the links didn’t make themselves known to me until just a few years ago when I began to compile them into a book, at which time I realized that my childhood neighborhood and many of my childhood friends, neighbors, babysitters, family members and pastimes were included in them.  Once I realized that these links were present, I played them up a little in revision, not in hopes of creating a book of linked stories, since of course this book is not, but rather to bring myself, and my reader, nearer emotionally to the world out of which the stories emerged. They were written over a period of nearly twenty years, during which time I wrote three novels which have nothing to do with each other.  I don’t have a preference as to writing novels or writing stories.  It’s an equal opportunity struggle for me to write one or the other, and there is equal enjoyment..  What I DO enjoy struggling most over are the individual sentences, no matter of what they are a part.

The collection is so unexpectedly funny even as it deals with really serious issues--the death of a spouse, for example. But I also love the language. In Choir practice, Emily signs her letter “your fateful friend,” which is actually more accurate than if she had used the word faithful. Have you always been attuned to the frisky possibility of language?

The other day I asked Chuck if he could explain the meaning to me of a dream I had had the night before.  I loved the dream and was scared by it but I didn’t have a clue what it meant. I told him that in the dream we were walking in a place that is like most of the places in the dreams I have been having lately, a place both inside and outside, a forested, verdant landscape studded with architectural elements like columns and archways and doorways guarded by rabbits.  In this particular dream, Chuck and I were walking, and a beautiful but unfamiliar wild creature that in the dream was understood to be a lion kept leaping out at me and nibbling gently at my hand, and when I looked at my hand there was a large, gaping hole in it that went all the way through to the other side, but it didn’t hurt and there was no blood.

Chuck said, That’s easy. You were dreaming about Ike.

Ike was our dog who died a few months ago.  He was a golden retriever.  He looked like a lion, and I often used to say to him,  “You’re a ly’in on the bed!” or “You’re a ly’in on the floor!”  He made me and Chuck whole, but now that he’s gone there is a hole in us.
When I used to cry, Ike always came up and sat near me. The foster dog we now have is at this moment entirely oblivious to my crying, and she is not a ly’in on the pillow. She is a foster dog on a pillow.  This doesn’t mean that I won’t someday fall in love with her, Chuck says…and when I tell her I love her, she believes that I do, and at this point, that’s what matters.

I want to ask about your publisher, Narrative Library, which is part of Narrative Magazine--which I love. Their tagline is “storytelling in the digital age.” So, I have to ask, what was the experience like and how did it differ from working with traditional publishers?

Editorially, the experience I’ve been having with Narrative Library is every bit as good and as warm as the best of my editorial experiences with more conventional presses. The people at Narrative have been on top of everything and have taken me through five or six readings with three different people.  They’re really in it for the labor of love aspect…and they would be the first to admit that they can offer comparatively little by way of conventional distribution and sales, which is something I’m happy enough to live with, given that I haven’t ever made a sales splash anyway.  Since they’re in it for the love, and since I am too, I know that we won’t disappoint each other.

My sister, Sylvia was just named a judge by the governor of New Mexico (The reason I didn’t ask her to rate my strangeness is because she’s in the middle of all that right now)  and what’s obsessing me is precisely how I will make it to the  swearing-in ceremony and still make the trip I was supposed to take with Chuck and his son and daughter-in-law before going to teach in Vermont this winter.  I WILL  manage, I’m sure, but I hate logistics and making travel arrangements and thus I tend to obsess over them.  Other than that, physical exercise is always at the top of my list.

As Alex might say, there are 3.8 of them but I don’t know what they are.