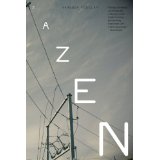 great interview. i will definitely check out zazen. it sounds very rich and textured.
i love the cover of the book too. very stark.