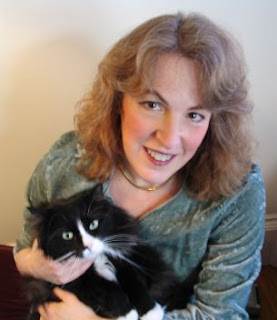 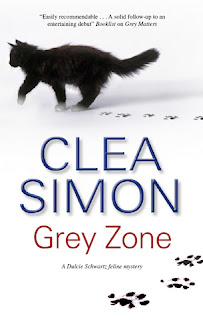 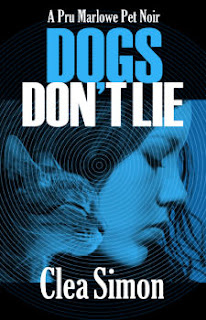 I first met Clea on a writers' site. She was so smart and so interesting that I immediately went out and got her book, Fatherless Women, and we began to email back and forth.  Then we met.  Then our spouses met, and before you knew it, we were all friends. Clea's one of my best friends on the planet and a fabulous writer, and I'm honored and thrilled to have her guest post on my blog. Thank you so much, Clea!
What would your pet sound like if she (or he) could talk to you? What would his or her voice be?
These are the questions that are at the heart of my new mystery, Dogs Don’t Lie. I mean, we know what our animals sound like in their real state, their natural state, their barks and meows and hisses. But what if we could understand them – if they spoke to us in our language, with human voices? What would those voices be like?
For some reason, it has always amused me to imagine my cat talking down to me. Sometimes, I imagine her scolding me – usually when I’ve done something that I assume must be annoying, like moving her toys to vacuum, or stepping over her when she’s sprawled in a doorway. “Must you?” I hear the disdain in her voice. “Oh, please.”
Don’t get me wrong; I’m neither psychotic nor self-hating. This voice just seems right somehow, and truly, when she comes up to me afterward all purry and wanting to be petted, this pseudo-scorn makes it all sweeter.
But the questions remain, and that eventually led me to create the unwilling animal psychic Pru Marlow. Pru can “hear” what animals say, telepathically, and she is continually surprised not only by what they say but also by how they say it. What their voices sound like – and, by extension, how they view themselves. (I’m not giving anything away, I think, when I reveal that the animals Pru meets in Dogs Don’t Lie often have very different opinions about themselves than their tone-deaf humans do – and often different names. It seemed quite natural, to me, for a neutered bichon frise to reject the name “Bitsy,” for example. In his mind, he was “Growler,” and acted accordingly.)
The voice of my protagonist Pru was another challenge, a bigger one. I was already writing one series when Pru came to me. My Dulcie Schwartz mysteries – which continue this month with Grey Zone – feature a bookish graduate student. Dulcie is sweet, a little naïve, and extremely earnest. When I write her, I become her, to the point of adopting her mannerisms to some extent. (Not a bad thing: she’s much neater than I am normally.) But when I started with Pru, I’d been reading a lot of the new female-centered noir (books like Megan Abbott’s Queenpin). And so Pru burst out tough and mouthy. Promiscuous, a little dangerous. Not the kind of heroine you’d expect in a mystery with talking animals, and not the kind of character I’d written before. It was a little scary, but also fun – and the more I wrote, the more her personality developed. Pru’s a cool character. Maybe that’s why her cat, Wallis, had to be even tougher, a take-no-prisoners tabby who isn’t afraid to read Pru the riot act when she steps out of line – or steps over her to leave a room. These characters declared their voices, and I had to fall in line.
Voice, of course, is always intriguing to writers. Questions around voice are key. What tone do we chose? What point of view? Voice is what makes a writer, makes a book. Voice is vital. The funny thing, I’ve come to learn is that in my chosen genre it is often ignored.
Crime fiction, after all, is known for its plotting. The biggest crime fiction names, in particular, ride on action-packed storylines. Boom boom boom – the hero is up and running, taking bullets and felling bad guys. In some ways, it is plotting that separates these big thrill rides from the more old-fashioned classic or cozy mysteries that are more or less what I write. Jack Reacher is never going to puzzle out the clues, just as Miss Marple never broke a collarbone and went on to tackle her suspect. And since these big thrillers are what earn the big bucks – and get made into movies – plot is seen as all important: the driver of series, of sales, and of readers.
This isn’t a complaint exactly. I do love plots and I admire page-turners. I read almost all of Dan Brown’s oeuvre at one point, just so I could learn his structures. Believe me, if I could end every chapter with “and then she saw the gun,” I’d be happy.
And yet, character – voice – keeps coming up. In fact, there’s a funny discussion going on in the world of crime fiction. You’ve heard of Stieg Larsson, the “Girl with the Dragon Tattoo” author? Well, his books have lots of action, sex, and violence, but what the critics have been commenting on is his heroine – the feisty Lisbeth Salander. It’s like they’ve just discovered characters.
Maybe it’s that they don’t expect them. Maybe, despite the evidence of Dorothy L. Sayers and Donna Leon, Agatha Christie and Denise Mina, they think crime fiction – mysteries – aren’t up to interesting, fully realized characters. But readers do, and we writers are readers. Maybe that’s why I’ve been obsessed by characters recently. Possessed by them. It’s their voices.
Posted by Caroline at 9:02 AM

Thanks for sharing your space with me today, Caroline! It's fun to reach beyond the genre market and talk about writing as writing. (And if anyone has any questions, I'd love to answer them!)

As an animal lover and rescuer (from mice to horses and everything in between), I'm so eager to read this.

Thank you, Beth. I'm working on the sequel now and I really want the animals' voices to stay true.

Yes, my cats talk down to me and we all know it. I find it interesting that I know exactly what my cats sound like (in my head) and I never realized that they had human voices. Thank you for the wake-up call....I'll expect some more condescention when I get home. LOL

They only do it for our own good, Mare.

Enjoyed your insights on plot and character, Lea. I agree: it's fascinating when character is lauded like it's a new thing. Also, as an animal lover (my dog is snuggled next to me now), I'm continually fascinated by their complexity. Sure, some of it might be anthropomorphism, but much of it does seem to be their own thoughts and feelings. Looking forward to reading your work. Cheers! Litsa

Love this post! Too many just write "cutesy" dialogue or treat animal viewpoint characters as furry humans. I'm also working with dog viewpoint in my thriller WIP service-pup-in-training character. Incorporating these "other nations" means trying to channel the ways the animal naturally communicates (smells, sounds, tastes) and perceives from their perspective. Kudos!