Let's Hear it for BEA 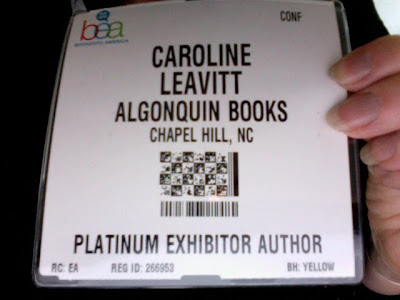 BEA was amazing this year. Maybe it's because I have a new publisher, Algonquin, whom I adore (okay, that's absolutely the reason why) but I had such a great time. There seemed, to me, to be such a sense of community, and because I was so anxious about doing well in my speech (to 190 librarians at a sold out lunch from the Association of American Publishers), I hadn't slept at all the night before. I had written out my speech and memorized it, practicing it in front of the mirror, the Mac camera, the wall, to my husband Jeff, on a tape recorder, etc. I kept worrying I wouldn't be funny, that I'd have to pee, that I'd cough at bad times!
The signing was fantastic, and so much fun. Libraries saved my life when I was a little girl and chronically ill with asthma (I'm just about cured now), and they were all so warm and friendly and I was so thrilled and honored to be speaking in front of them. Everyone at Algonquin was incredible--and I mean that with capital letters. I insisted on drawing a coffee cup on everyone's page as I signed, except for the non-coffee cup loving folk who just wanted my scribbled name (but I snuck in a few stars for them.) And part of the fun was seeing brilliant fellow writers Jessica Brilliant Keener, Jennifer Gilmore, Susan Henderson, Susanne Dunlop, Joe Wallace, Leora Skolkin-Smith, and many more!
Even better, Rainy Day Books, my guardian angel bookstore was there, so I could give a hug in person. Thanks, too, to RiverRun Bookstore, to PW, Booklist, Library Journal, United Federation of Teachers, Jewish Book Council.
While my hands were a tad shaky (my beloved editor told me she was a touch worried before I got up, but maybe that was because I told her I wasn't eating the lunch for fear I'd throw up--but I meant that as a joke! Sort of. Later, she told me I seemed to switch on like electricity the second I spoke), I did indeed ham it up and have a great time speaking--and I got laughs (you have no idea how getting a laugh can feel like chocolate every day!) Every author (Susan Isaacs, Jonathan Adler, Joshilyn Jackson, Deborah Coonts, Adriana Trigiani) got a gracious and heartfelt introduction, and I was thrilled to have this blog mentioned in mine!
Even better was the Algonquin party that evening, which was packed, and where I stayed until five minutes until the end, and ran into people I hadn't seen in years and met so many incredible people, including the astonishing Heidi Durrow, who is also published by Algonquin. (The moment I entered the party, I kept asking, "Where's Heidi?")
I do want to say one word about generous writers. Adriana Trigiani knocked me out. The moment I stepped inside and saw her, I mentioned to my publisher that I wanted to meet her and she took me right over. Adriana stood up, hugged me and said, "Darling, email me, whatever you need me to do for you, I will." She was clearly the most famous and feted of everyone in the room and they had her speak last because no one could have followed her speech, which was outrageously funny, but when she came up to the podium, she did this incredible thing. She held up each one of the other writers' books and said something complimentary, heartfelt and generous (there's that word again.)
While speaking, Adriana called up a librarian from the back, ("You. I like the way you look in that coral top. Come up here. I want to give you a ring." ) And she did give her a ring! (There is a story that once, when she won an important award, right on stage she pulled out her cell phone to call her mother and tell her.) She asked who knew someone named Laura and gave away a signed book made out to Laura, and her speech was so hilarious, so warm and real, that I ended up wanting her to move next door to me so I could bake her brownies every day.
Anyway, I am feeling extraordinarily grateful for the camaraderie, the support, and the pure joy and fun of BEA this year. Deep thanks to everyone who came by my table for books (please let me know how you like my novel Pictures of You), for everyone who introduced themselves to me or took the time to introduce me to others, to everyone at BEA and everyone at the Association of American Publishers, and to every single person who even met my full-of-joy gaze.
Posted by Caroline at 10:10 AM

I'm so delighted you had such a wonderful time, Caroline. You paint a glorious picture of your experience and your joy is transmitted in your writing. Thank you for that! I'm beaming as I type.

What a great account! I'm glad it was such a good experience. Reading your tweets leading up to it, I was nervous for you.

What a joyful report! I am grinning like crazy now. Yay Caroline! xoxo

I'm here to testify that the line of people waiting to get a signed copy of Caroline's book was so long (around a corner and down the length of an entire aisle), I started to laugh with joy. And the line never did get shorter!

Caroline, how wonderful to see this attention you are getting.
Long, long, long long overdue!!!

Wonderful. I loved being there too (first time)...and especially loved meeting you!

Oh thank you everyone for such wonderful responses. part of my joy was sharing the joy and my new role model is Adriana Trigiani--you meet her and her warmth and energy just makes you feel dazzled. I want to BE her as a person.

I wish I'd gone to BEA. I can't wait to read Pictures of You. My ARC is calling to me right now.

Can not wait for the book!!! xox

Robby, I hope you like it! BEA was such a blast, next time I'm going to do all the days instead of just one.

So happy for you!

You managed to capture such a personal and intimate portrait of BEA. I'm sorry I missed seeing you there, but I am very excited for Pictures of You!

I also have to thank Library Journal for their article "Make BEA Your Bitch: Authors to Stalk and Galleys to Grab" for their incredible mention of me, me, me! I am still dazzled and happy and in Adriana T. form--my new role model-, I want to spread the joy to everyone else.

Sounds like a wonderful, magical time and I cannot wait to read your book!

Oh, honey, how marvelous! And every bit of deserved. Yay!

This is one beautiful tale. I love every ounce of it. Congratulations, Caroline.

soma online carisoprodol overdose how much - soma drug in book