Read this Book; When She Flew 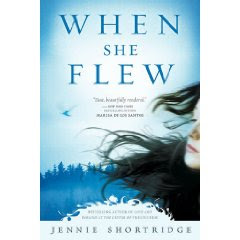 When She Flew by Jennie Shortridge is the kind of dark, involving novel I happen to love. Based on true events concerning a Vietnam vet raising his young daughter in the woods (and succeeding at it), When She Flew delves into questions about family, society and love itself. Thanks, Jennie for answering my questions.

There’s juxtaposition in the book between what society might think is best for these people and what they feel is best for themselves. Ray, the disabled Iraqi veteran refuses to go to the places allocated for the homeless, and Lindy lives in the woods with him rather than going to a foster home—and yet, they both have rich lives. How good a job do you really feel society does when it comes to ministering to people?

The author brings up an interesting conundrum of modern society when she asks, "what if those in need don't want the help?" It raises the question, certainly,do we help because we see someone in need or because we are in need of helping? And then, what does that mean when the offer of help is refused?
From your interview it sounds like the author may have found the answer. Looking forward to this read.