Read this Book: The Belly Dancer 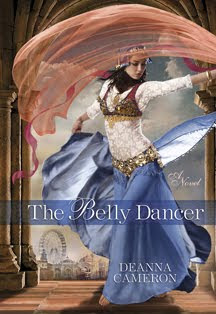 One of the things I most love about teaching writing at UCLA is how the writing journey doesn't end when class does. Writers stay in touch and I get to celebrate with them when they succeed. DeAnna Cameron was in one of my classes (one of my fave people, too), and I was absolutely thrilled when she sold her novel, The Belly Dancer. So, of course, I asked her if I could pepper her with questions and she graciously agreed. Thank you, DeAnna!

So how did you get entrenched in the world of belly dance?

It started back in college, when I signed up for a Middle Eastern dance class to satisfy a course requirement. And from the very first day, I just fell in love with it. I loved the way it felt to dance, I loved the music, and I loved how it got me out of my head. Even after my course requirement was filled, I found myself returning again and again to that class and others like it because I was having so much fun. And then, in class I would hear about these festivals and special belly dancing events. That’s how I discovered the really vibrant and wonderful belly dance community here in Southern California. But it’s not just here, these communities exist all over the nation. You can go to just about any town in any state and find belly dancers, if you know where to look.

What was your research like? And who was the real Little Egypt?

My research began long before I had any thoughts of writing a book. I was interested in learning about the origins of belly dance and particularly its migration to the United States. But when I discovered the belly dancing scandal that shook the 1893 Chicago World’s Fair, that’s when my writer instincts kicked in. I knew that would make a great backdrop for a story.

So that’s when my research became more focused. I collected every book I could find on Little Egypt, the World’s Fair and 1890s Chicago; scoured university archives online; studied the fashions and daily lives of Victorian women; and visited Chicago and New Orleans to see the places I was writing about.

As far as the “real” Little Egypt, I tend to agree with dancer and historian Donna Carlton, who wrote what I consider the bible on the subject, “Looking for Little Egypt.” Her exhaustive search came up with no evidence that a dancer ever performed at the fair by the name of Little Egypt. What Carlton found was the name actually became well-known a few years after the fair closed, during a notorious police investigation into an incident known as the “Awful Seeley Dinner.” At that dinner, which was attended by a number of prominent men in New York, a dancer by the name of Ashea Wabe, who danced under the name “Little Egypt,” was allegedly hired to perform an indecent dance. The police raided the affair, and that sparked the investigation. The story was carried in the New York Times and other newspapers across the country, and that made “Little Egypt” a household name.

Can you tell us about the real life scandal involving the Egyptian belly dancers and the 1893 Chicago World's Fair?

You have to remember this was the Victorian Era, and women were expected to wear clothing that obscured just about everything of their natural shape. The “proper” silhouette was something along the lines of a full, floor-length skirt, a miniscule waist (wrestled into shape by a corset), maybe a bustle, and exaggerated sleeves.

So when the Egyptian dancers appeared in their ankle-baring skirts and tiny vests over thin blouses and no corsets, that alone caused a lot of consternation among the locals. Add to that the dance itself, with its shoulder shakes and hip wiggles, and you’ve got something that many people considered downright vulgar. Complaints were lodged with the fair authorities, and the local newspapers were filled with letters to the editor that called for these entertainments to be shut down. The criticism was widespread, coming from regular folks, as well as religious and civic leaders of the day.

The Board of Lady Managers, the fair’s women’s auxiliary group that I write about in the novel, also opposed the performances and tried to ban them, but it’s worth noting that the board’s leader, Bertha Palmer, was quoted in the Chicago Daily News as wanting to work with the dancers, and not just shun them. “In some ways they [the foreign dancers] are ignorant,” she is quoted as saying, “and I think we owe it to our cause that we visit these women and invite them ... and spend time and money on teaching them our ways and manners.” That mindset is what opens the door for the novel’s heroine to get close to the dancers and is the starting point of her relationship with them.

Since I am obsessed by process I have to ask about yours. What is your writing life like?

It’s changed pretty drastically since I had my daughter in May. I used to work steadily for about five or six hours every weekday, but now I work my writing time around her napping and playtime schedule. On a good day I can squeeze in about three hours. Although my progress is slower, I’m trying to make better use of my limited time. I’m not endlessly rewriting the same passages over and over again, and I’m being more diligent about researching only what I really need for the story and not letting myself get lost in the minutiae. I’m also trying to not to go overboard on the emailing, blogging, tweeting, facebooking and all that other social networking that can be so much fun, but which can chew up all my writing time if I let it.

I have a couple of stories in the works that I’m really excited about. One is a contemporary story that involves belly dancing, and the other is set in the world of vaudeville in New York circa 1910.

What question didn't I ask that I should

After being at it for nearly 20 years, am I a great belly dancer? No! :-)I’m very much a writer who belly dances, not a belly dancer who writes. For me, it has always been much more about having fun, appreciating the dance, and spending time with my friends.

Thanks, Caroline, for the great interview with DeAnna. How cool it must have been for you to see your student succeed as DeAnna has.

The romantic query letter and the happy-ever-after said...

Lovely cover and an insightful interview. Every success with your book.
All the very best,
Simone

Hunting for useful sources that can help you to learn dance online is really time-consuming. However, if you are getting tired of searching for such resources over the internet, visit the website http://www.learn-dance-online.com and go through dance directories.