Read This Book: Shades of Grey by Clea Simon 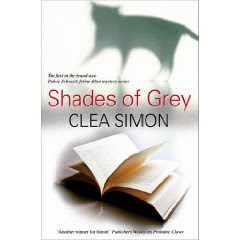 Clea Simon is a lifeline friend of mine. There isn't a writing day that goes by that we don't email to check in on each other, talk about writing, solve each other's problems, and just cement our friendship. I originally posted about her latest mystery Shades of Grey before it was sold - as a "best book you've never read." Now I am thrilled to report that Booklist agrees with me, raving, "Well paced and tightly plotted, debuts a promising series from the author of the Theda Krakow mysteries." Clea is the author of Mad House: Growing Up in the Shadow of Mentally Ill Siblings, Fatherless Women: How We Change After we Lose Our Dads, and The Feline Mystique: On the Mysterious Connection Between Women and Cats. She's also penned four Theda Krakow mystery titles and launched her Dulcie Schwartz series with Shades of Grey (and will follow it with Grey Matters.). Clea was kind enough to let me pepper her with questions. (Thank you, Clea.)

What's your writing process like? Outline or just "follow your pen?"
I do a sort of mix of the two. I'm not really an outliner. I've tried to do that, because I write in a genre (mysteries) that has pretty set conventions. You're supposed to have a crime, clues, and some kind of resolution, after all. And I write traditional mysteries, of the Agatha Christie style, so I want the crime to have a logical explanation that the reader could figure out from what is shown in the book and I want both my criminal and my sleuth to be normal, human characters. But even knowing these stipulations, I can't outline. I've tried, but when I write an outline it just kind of sucks the juice of the book. If I write an outline, I don't want to write a book. That said, I don't just go blindly forward. I do have some ideas when I start. I usually know who did the crime - though that has been known to change! - and I have some ideas about how the heroine will uncover it.
These days, I work with a white board and a bunch of post-it notes. I jot down little things that occur to me. Lines I want a character to say, or clues that I hope to use at some point, and stick them up on the white board. I don't always use them, but on those days when I don't feel inspired, I can look at the board and choose something to elaborate on.
What is up next for you?
I'm not sure. I actually just finished the sequel to "Shades of Grey." It's called "Grey Matters" and will pub in the UK in December (so soon!!) and in the US in March. I wrote that one on deadline, awfully fast, and so now I'm just kind of wiped out. I do a lot of editing and work for hire, so I'm trying to catch up with that and see what project calls out to me. I don't know if Severn House (my current publisher) will want more Dulcie Schwartz books yet, though I hope they'll let me know soon. I also have another manuscript out making the rounds. So, I could be writing another mystery to follow up "Grey Matters" or another Theda Krakow book (Poisoned Pen published my "Probable Claws" in April, the publisher hasn't asked me for another - but I think I could pitch one), or a sequel to the book that's making the rounds. Or something entirely different. I'm waiting for a sign - either a call from my agent or inspiration. Right now, the muses are just telling me to clean my house and catch up on laundry.
Where do you think the future of mysteries is going?
Great question, but I don't know. For a while - and this may still be true - mysteries were getting very codified. I've had publishers tell me that my mysteries needed more feline content to be cat mysteries, or that I had to change the language to fit into very specific subgenres. But then I see writers like Tana French and Denise Mina, incredible talents who do not fit into specific categories, and they're doing well. So then I grow more optimistic. I sort of feel like I can't think about the future of the genre too much or it will make me crazy. I just have to write the books I want to write and hope that they find publishers and readers who love them.
What I love about your books is you have such strong, complex heroines (and complex animals, too!). How much of them is you?
Well, thank you! I think that each of my characters is a little bit of some aspect of me. Villains, too. I mean, we research our characters and we pick up on people we see around us. But aren't all our improvisations basically extensions of ourselves? Even when I create my feline characters, they're saying and doing what I imagine they should say or act for the reasons I attribute to them. My main concern is making them believable - letting them all follow their own logic, even if one or another is really an outgrowth of my worst temper tantrum, or something like that.
Cambridge figures as a character in your books--which I also love--Are you going to continue to set your books there and if not, why not?
Depends on the book! My Dulcie and Theda series are set here, and Cambridge is part of those books. But my as-yet-unsold book, "Dogs Don't Lie," is set in Western Mass., because I wanted a city girl who had fled back to her small town hometown. For future projects, I'll just have to wait until my characters tell me where they belong, I guess!
Thanks so much for having me here today, Caroline! I'd love to answer any other questions you or your readers may have. I'll be stopping by in case anyone wants to post any - or you can always reach me through my website athttp://www.cleasimon.com
Posted by Caroline at 6:05 PM

Shades of Grey is wonderful - I can't wait for Grey Matters.

I loved your answer to the question about the future of mysteries, and it was interesting to me to hear that your publisher wanted more feline content. I think what makes your stories so unique in this particular genre is the fact that the cats don’t participate in solving the murders, they don’t talk, and they act like real cats, which, to me, makes them more “real”. What made you decide to portray the cats in your stories in this way rather than going for the more "cutesy" approach that is typical for animal-themed mysteries?

Thanks for asking, Ingrid!
Basically, I write what I want to read - and what I can write. That's sort of vague, huh? I guess what I mean is I think of cats a certain way. I see them a certain way, and so that's how I write them. I'd started to say that I write what I want to read, and I don't like cutesy books - nothing against them, but I can't read them. But I do read a lot of hard-edged, dark mysteries, and I don't seem to be able to write them. So... I write more or less realistic mysteries with cats in them, because out of what I want to read, that's what I can write. Or something!

Thanks, Leora,
I am enjoying the writing. It's funny, I don't think of myself as a success. There's so much more I want for my books! But I'm loving the work, and ultimately that's enough.

fantastic post, very informative. I wonder why the other experts of this sector don't realize this. You should continue your writing. I'm
sure, you have a great readers' base already!
Also visit my homepage : http://currentmortgageratestoday.org