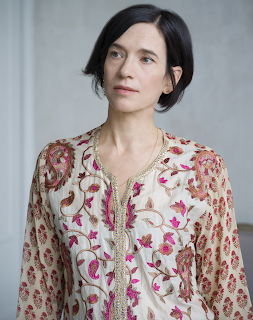 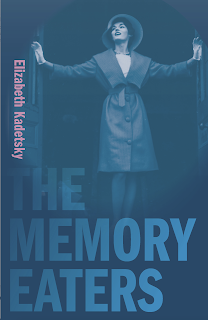 I'm thrilled to host Elizabeth Kadestsky. She is author of the memoir First There Is a Mountain, the short story collection The Poison that Purifies You, and the novella On the Island at the Center of the Center of the World. A professor of creative writing at Penn State and nonfiction editor at the New England Review, she is the recipient of fellowships from the Fulbright Program, MacDowell Colony, and Vermont Studio Center.

Thank you so much, Elizabeth!


One of the most moving sentences I’ve ever read is this: Ghosts live with us. I think they do, too. And I think it isn’t, as Hollywood would have you believe, the ghost who needs to move on to the light—it’s us. Can you talk about that, please?

That is very kind, thank you. I love your way of putting that—I hope to move on to the light some day. My book definitely proposes that our ancestors hover about the periphery like ghosts. They shape our actions, and we make unconscious decisions every day based on stories that have been passed down for decades: stories that we have never interrogated or consciously allowed into our worldviews. Stepping on to the light, for me, is recognizing the presence of my ancestors in my subconscious—good and bad—and then making conscious choices about the extent to which I allow their storylines to shape my reality. This can be true for many people. Shame, in particular, seems to get passed down unconsciously. I know that my mother was unfairly shamed as a child, and that her irrational shame infected me. Another very simple example of an unconscious ancestral narrative is that my Franco-American relatives can be fatalistic about the prevalence of alcoholism and addiction “in our genes.” Having read about genetic markers and the genetic markers for addiction specifically, I don’t believe that this is an inevitability at all. I refuse to give in to the idea that something so personal is fated and out of my control.

Ghosts also live with us in dreams, and perhaps it is through these dreams that one can take further steps toward conscious living. Dreams access that space where the dead and the living co-habit. My mother fully occupies my dream life. When she had Alzheimer’s and was still alive, I continually dreamed that a miracle cure had been discovered and she recovered. After she died I continually dreamed that she was still alive. The dream self, I guess, doesn’t adjust easily to bad news. Even eight years after her death, my mother still appears in my dreams, but there is a greater sense that she has moved “on to the light,” that she is no longer living. But perhaps this slow coming to terms is also a version of my own moving into the light. My ghostly dream mother is, perhaps, my spirit guide shepherding me toward greater reconciliation. Sadly, though, the same rationalism that denies me the salve of believing in an afterlife or reincarnation also insists that I sit with the reality that I am mortal and that life is evanescent. Perhaps the light that we, or I, must enter is the light that allows me to shed my fear of death after seeing my mother move through the ghostly affect of Alzheimer’s to actual death.

How did you decide to write your memoir as a memoir-in-essays? (I love this structure by the way?)

Thank you, again! I saw no way to tell my story in a linear manner. Whenever I wrote about what was happening in the present—my mother’s decline into Alzheimer’s and the many dramatic upheavals along the way—the past would insert itself. Probably, my mind did this as a means of coping. The past appeared in no particular order. The same would happen when I was writing about the past—reflections on the present moment ordered themselves more by topic than by timeline. The essay structure seemed the best way to allow an overlay of time, memory, and mental states. My story, after all, was about occupying liminal spaces. That slide between past and present that I was experiencing while writing the book reflected my mother’s Alzheimer’s-ish reality, almost a sleep walking. It also reflected my own nostalgic mind state, which cast an unreal patina onto events from the past, recalled simultaneously in starkly opposite, positive and negative, ways. I was also writing about drugs, my own experiences in the past and my sister’s tendency to bend the facts or refuse to stick to a hard and true sense of accountability when drugs were involved. My reaction to the latter was to perform the metaphorical throwing up of hands—I didn’t want to waste my time pursuing the truth when someone was artfully constructing false narratives. The book, in a sense, also refuses to impose a rigid sense of rationality. Locating a hard and fast truth when the markers are so elusive is too difficult, and it doesn’t always lead to greater insights or resolutions.

There is so much in this memoir about not just the need to forgive or forget or move on, at least, but to also remember. Part of your book deals with your mother’s Alzheimer’s and about reconstructing a past. I think a lot about how the brain doesn’t really differentiate between what really happened and what someone is hypnotized into believing happened, so that makes it seem as if our memories are indeed fluid. Would you agree? And how do think that helps us (or hinders us) in living our lives?

Memory is our own endless stream of fake news, isn’t it? I read somewhere that dysfunctional families create false mythologies in the same manner that cults do. The cult member accepts a tinged version of reality set forth by a charismatic leader. The isolation and interiority of the group ensures a lack of input from outside, such that the accepted truth is never challenged or subjected to outside corroboration. When a member does allow the entry of an external world view, that person is banished. In this way, group think perseveres.

My grandmother’s alcoholism created dysfunction in my family that rippled out through generations; with it came many false narratives. One was a false accusation against my mother that shaped my mother’s life thereafter, and subsequently shaped my own. Unspoken family secrets are the closest equivalent of group think. Since they are unspoken, they can never be challenged, and at a certain point many of the players forget what, exactly, they even were. All that is left behind is a residue of bad feeling, like that Victorian idea of the ghostly froth that seeped from the mouths of the living dead, the ectoplasm.

This residual memory of an unnamed transgression certainly happened with my mother. By the time she had Alzheimer’s, she had no recollection of the false accusation against her. I believe that through years of shame and denial she’d expunged it from conscious thought even by the time I was an adult, when I first began to sense that it existed. So, for me, unearthing the secret, and speaking it, was an important part of my refusal to forget. Once the accusation was spoken, anyone could see that it was ludicrous. By that point, my mother was in a state where memory and imagination were nearly the same thing, and in my family, I think, there was always that tendency to conflate the imagination with the real anyway. My mother told me the New York Times was “full of lies” when I brought it come as part of a high school English assignment. Choosing journalism as my first career was my next act of rebellion against this family mindset.

Nevertheless, I think that if someone can reconceive a painful history in such a way as to make it meaningful and to point a way forward and away from darkness, be it though nostalgia or recasting the story of one’s own life, by all means they—we—should.

Tell us about your writing process, rituals, planning or not planning, number of cups of coffee you have to have, and more.

I don’t sit down at the desk until at least a full paragraph has taken form in my mind: I’m a firm believer in that “eureka moment”—that one’s best ideas will come when one is in a relaxed and slightly distracted mind state. Nothing is worse for the imagination than staring down that blank page. If I’m lucky, the paragraph takes form when I’m in a position to record it into an audio note or jot it down, because that way, I can inscribe it in my memory. When I’m ready to create the actual written record, I often don’t go back to the original note—having recorded it is enough. Then, once I have a piece of writing started—be it something new or a chapter or scene from something in progress—I carry it around with me in multiple forms, and I more or less compulsively read and re read it, making edits in my head that, once again, I don’t always write down right away. I’ll often have a version on my phone as well as a printed version in my purse. I then become extremely annoying to all the people around me because I can’t think about anything else, and I will constantly pull out any one of the extant versions of the work in progress to keep adding to it and refining it. Once I have something started, I am working on it pretty much 24 hours a day, including in dreams, until it’s done.

I’m currently on a Fulbright grant to India pursuing a research topic that deals with memory in another form—about the uses and importance of objects from antiquity, and their ethical and unethical applications, for instance by museums. Being in India, my mind is often in the Metropolitan Museum of Art in Manhattan, a place where I spent a lot of time as a child and a nexus for the many wonderful books that I’ve been reading dealing with the art and antiquities trades. I’m not sure exactly what writing will come out of this journey, but I am very interested to spend some time at the Met when I return to see what comes to mind.

Something about posterity and publishing, perhaps? Now that I am finally publishing this book, I am thinking a lot about what it means to put it out in the world, especially since it exonerates my mother for something that I wish she could have forgiven herself for during her life. Publishing a book causes one to spend a lot of time hoping for it to get attention and comparing it to how much attention other books have received. So, I am trying to keep hold of the fact that the simple act of publishing this book accomplishes so much of what I initially hoped for, ending, as it were, a cycle of secrets and lies.