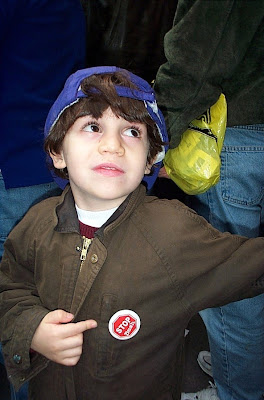 This incredibly handsome lad is my son Max, at age four, during the very first Bush election. He's at a NYC rally proudly wearing his STOP BUSH button. Below, of course he is twelve and he has his Obama button. He's a news junkie like his dad and me, and as the election gets stranger and stranger, I can't help but feel a pulse of hope.

Laura Bush says Palin lacks foreign policy? McCain, seeing his numbers go down, insists there be no debates so they can work to solve the Wall Street horror he's part of? Biden maybe bowing out so Hillary can come in (I would love that!)

I'm so used to having political hopes dashed but maybe there is such a thing as karma.
Posted by Caroline at 5:55 PM

Oh man, I just came from a saxophone summit and clearly have missed an entire news cycle! I saw McCain's stunt of "calling off" the campaigning "for the duration." Uh, what, is he going to cancel the elections, too? (Though I confess, when I first saw that on the screen, I thought, "Good! He's conceding.") And when I saw that Laura Bush was going to comment on Palin, I tuned it out mentally, convinced that she was going to say, "oh she's a lovely girl" or some such. But Biden bowing out to Hillary? I, too, would have loved Hillary - but at this point? I mean, Biden was a damned good choice! I worry that a move at this late venture will make Obama look indecisive.... I'd rather they publicly promised Hillary a big cabinet position!

What's next? Biting off the heads of chickens on the capital steps? Maybe Mcain and David Blain will do a tandem "hang by their scrotums" for 60 hours in the Capitol Rotunda... a McBlain event! Must see CSPAN TV!

I can't take this anymore. I swear I'm moving to Iceland.

I live in the People's Republik of Cambridge, Jeff. You should all come up here and we'll chop the ropes and float off and become our own island nation.

oh yeah, and send a book for barack, too!