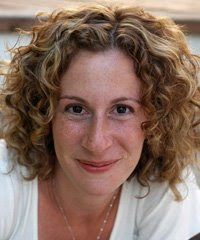 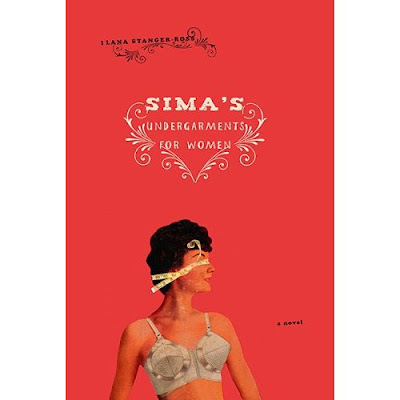 Okay everyone, this book, Sima's Undergarments for Women by Ilana Stanger-Ross is irresistible.  I raved about it for my column at Dame Magazine, and I shamelessly begged Ilana for an interview.

Sima's Undergarments for Women is set in a lingerie shop--one of the most charming and evocative and story-worthy settings in the world.  Where did that idea come from?

My mother gets full credit. We were leaving a shop much like Sima's one day when she said to me, "You know, you should set a story in a shop like that." It's such an intimate environment, and neighborhood stores like Sima's are disappearing all too quickly. I started thinking about it, and had an image of a woman with perfect breasts walking into that store and turning everything on its head. And so it began.

2. I was also fascinated with the Orthodox Jewish community. Is this from research, personal experience or both?

Both. I am not an Orthodox Jew, and so neither is Sima--it wouldn't have felt right for me to write from inside that perspective. But I grew up not far from Boro Park, and my mother grew up in Boro Park, and my father was himself Orthodox (though not Hasidic) until his late 20s, so I was relatively familiar with that community. And then, I did some reading, too.

3. The idea of community figures predominantly in the book--Sima's ache for attachment is palpable. Do you think there is a loss of that community in modern life, and if so, why?

Oh, yes, definitely. So much has been written on this that I am wary to enter into that conversation, but: we're so transient, we work on computers, we shop at massive chains in big-box malls or online. In certain neighborhoods one can still experience that sense of community--the store owner who knows you, who just got in something you're just gonna love--but for so many of us the daily errands are mostly an anonymous experience.

4. You're going to school to be a midwife, which I also find fascinating.  First, I want to know how a writer chooses that profession. Next, I want to know if you are writing about it and how it impacts your work?

Well, you have to make a living somehow. I worked for a number of years in editing and publishing, and ultimately I really felt that I needed my work to have a more direct impact--I wanted to know, at the end of the day, that my work had made a difference. While there's no doubt that we need editors, I guess I wasn't convinced editing needed me. Meanwhile, I'd always been interested in medicine and women's health, and then I moved to Canada and discovered the midwifery model there and thought, hmmm, this is exactly what I want to do. I have done a fair bit of non-fiction writing on birth, but so far no fiction. But it may be time to bridge that gap-- I think there might just be a midwife in my next novel.

5. You're living in Canada now, correct? Is it easier to be a writer there?

Well, there are so many variables that go into what makes writing feasible for any one person, but I do think that Canada has traditionally supported its artists much more than the United States. When I lived in Ontario I was able, as an emerging artist, to receive nearly $20,000 in city and provincial grants--in the United States, there were simply no equivalent grants for me to apply for. And then there's the year-long government-paid parental leave --I wrote while home with my daughters. Canadian booksellers and book reviewers also champion Canadian writers, and Canadians tend to read more than their American counterparts. So, while writing is never easy, there are resources for Canadian writers that don't exist south of the border.

6. What is your writing life like, and what are you working on now?

I am currently a student midwife in full-time clinical placement with two young daughters, so carving out any writing time is a struggle. But a writer once told me, "Even if you only have 20 minutes, write for 20 minutes."  These days I am stealing time as I can, slowly building a new story in my head.

7. What question didn't I ask that I should have?

How about: when can I visit you on Vancouver Island? Any time, Caroline! We have some amazing independent bookstores in Victoria--come!
Posted by Caroline at 3:17 PM

Lingerie is a French word and all the people around the world know about it very much and it is very important undergarment and without it you feel uncomfortable and incomplete. And the plus point of the lingerie is that after wearing this women feel their selves complete and it give them pleasure and excitement. This is special type of underwear not the ordinary type which is used by so many people.

The lingerie is different in style and in shape because it is designed by a professional designer whose effort shown in it. the designer design the lingerie in such a stylish way that enhance the look of women and also express their inner feelings as well as through these undergarments they become more attractive for their life partners and grab the attention of their partners and get appreciation from them because these lingerie give their body perfect shape and they look more sexier than ever.

These products are easily available in the market in different colors and shapes, it is on your choice that what type of underwear you liked and in which color. Mostly women like the lingerie because in this undergarment they feel theirself comfortable and this garment give them maximum pleasure. These kinds of undergarments look sexy as well. And designer always try to give it more proper shape, therefore it become more easier to wear and you feel free from any kind of tension and good thing is that designer take care of these points very well.

aire bra
The most important thing to remember is that you can wear all the greatest
clothes and all the greatest shoes, but you’ve got to have a good spirit
on the inside. That’s what’s really going to make you look like you’re ready
to rock the world

meta slim
To leave the world a bit better, whether by a healthy child, a garden patch
or a redeemed social condition;

Aaahh it is very interesting posting nice work like your topic