Jami Attenberg talks about her extraordinary new novel SAINT MAZIE, her dapper dog Sid, writing about NYC, and so much more 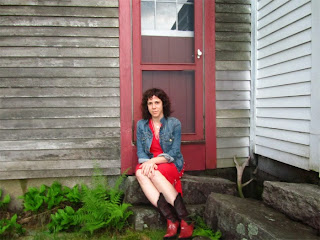 Portrait of the artist in cowboy boots 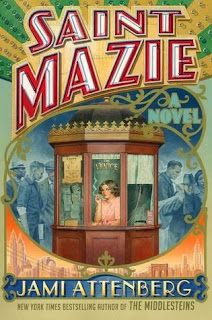 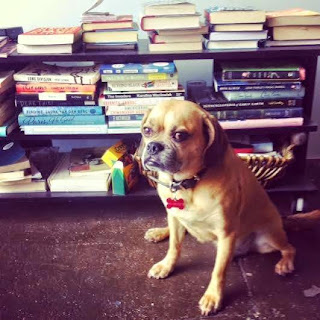 The ever dapper Sid

Jami Attenberg is one of those writers who pops with so much personality, you want to be around for the sparks. How can you not adore someone who happens to be down-to-earth, funny, real--and does not seem rearranged by her mega-success, which by the way, is deserved to the electron. She's the author of  the story collection, Instant Love, and the novels The Kept Man

, The Melting Season,  and The Middlesteins, which zoomed up on The New York Times bestseller list, and will be published in England, Taiwan, Russia, Italy, France, Turkey, The Netherlands, Germany and Israel in 2013. It was also a finalist for both the Los Angeles Times Book Prize for Fiction and the St. Francis College Literary Prize.  Saint Mazie is remarkable, heart-winning and heartbreaking at the same time. I'm thrilled to host Jami, and thank you, thank you, thank you, Jami!

I always want to know what sparked a novel--what was the question that haunted or nagged at you that you wanted to explore with Saint Mazie?

Because she was based on a real person, I knew certain facts about her, and I was curious about the motivation behind them. Like I wanted to know why a Jewish woman would have an interest in the Catholic faith, and why she chose to remain unmarried in her life, and how she became the kind of person who would devote much of her adult life to helping the homeless. Those were the three main mysteries to me: faith, love, and compassion. Pretty big topics – certainly an excellent foundation for a novel.

I loved the structure of the novel, the chorus of voices, Mazie’s diary entries, all forming a tapestry that becomes a living, breathing person. Did you always have this structure in mind and did anything surprise you about it as you were writing?

Initially it was supposed to be just her memoirs. For about nine months, I was certain that would be the structure of the book. But I had to take a little break from writing it because my last book, The Middlesteins, came out, and I needed to tour and promote it. And when I eventually returned to writing I saw that the book needed to be bigger than just a memoir. It just didn’t feel authentic to me as written, and I couldn’t say all that I needed to say within that structure. So I ended up chopping up what I had written – probably about 100 pages – and repurposing some of it and trashing the rest. And then the book really cracked open for me. In some ways it became easier to write because I could say anything I wanted because I was no longer limited to a single voice, but it also became harder because I had to master more voices, and create more storylines.

I’m so glad you liked it, thank you. Mazie is vain in a few ways but she is not a braggart about her exceptional humanity – which is one mark of a true hero.  The choices that she makes, her devotion to helping others, she does it for no one but the people she helps. I wrote about her because I wanted to learn from her! I wanted to contemplate what it would be like to be a selfless person, even if – or because – I am not that way myself. Because yes, I do so love being heard.

Saint Mazie is such a wonderful, bustling love letter to New York City. I know you live here, but you also spend a lot of time in New Orleans. How does place impact you--and your writing?

No one was more surprised than I was that I was writing a New York novel. It didn’t even occur to me that was what I was doing until I was mostly done with the book. I know that sounds strange, but I was just interested in her, and she just happened to be in New York. And, for the most part, the New York in the novel doesn’t exist anymore. But the research made me fall in love with it again. And there is something about being young in New York that is quite thrilling. I moved here in my twenties, and I had a hell of a good time. So if there was anything I was channeling, it was that period of time, when I stayed up late and walked the streets and everything was crumbling and rising and crumbling, again and again, and I felt like I could change my life if I just kept hanging on here. Mazie’s exhilaration felt very familiar to me.

I have to ask about Sid, your dapper dog-about-town. How has having a dog changed you? Has it changed your writing at all? (My tortoise definitely changed mine…)

He’s made me happier. I don’t have a lot that is stable in my life, mostly because I travel so much. Just my books, and now my dog. For a long time I only had to be accountable to my work, but now I have to show up every day for this adorable pup, no matter what. I’ve always thought of my books as my babies, but the truth is having a dog is the closest I’ll come to parenting. I don’t know if it’s changed my writing. It’s just nice to have him around.

What’s obsessing you now and why?
Ah, this book launch! Planning my time for the rest of the year. I’ll travel this summer and fall here and abroad and I’m just trying to manage all the details of my life. Other than that I’ve got this Courtney Barnett album, “Sometimes I Sit and Think, and Sometimes I Just Sit,” on repeat. She’s this dry, funny, rambling, poppy Australian singer, and I can’t get her out of my head lately.