Christine Sneed talks about Paris, He Said, writing seven drafts, Prince, and so much more 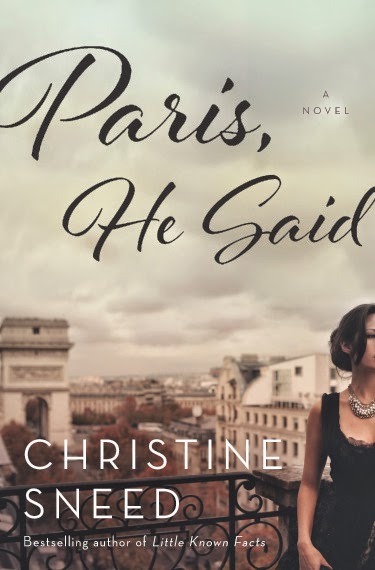 I was first knocked out by Christine Sneed's work when I read Little Known Facts (and I wasn't the only one. It won the Society of Midland Authors Award for best adult fiction in 2013, and was named one of Booklist's top ten debut novels.) Along with being named a finalist for the 2010 Los Angeles Times book prize in the first-fiction category, her first book, Portraits of a Few of the People I've Made Cry won AWP's 2009 Grace Paley Prize, was awarded Ploughshares'  John C. Zacharis prize, and was chosen as Book of the Year by the Chicago Writers Association. Christine has published stories in Best American Short Stories, New England Review, Glimmer Train, and many other notable publications.  Christine's luminous new novel, Paris, He Said, is about a woman who moves to Paris with a man who promises to support her so she can do her art. About desire, creativity, and finding out what really happens when you get what you think you want, it's a literary page-turner. I'm thrilled to have Christine here. Thank you, Christine!


Every novel has a moment of origin, which I always find fascinating. What sparked the writing of this particular book?

When I was trying to begin a new novel after finishing my second book, Little Known Facts, I had several false starts and finally paused to think at length about the subjects continue to be of interest to me, and I realized that my interest in French culture and art and in romantic relationships would be good places to start.  From there, I came up with Jayne and Laurent, and eventually, Susan Kraut, who is a real person; she’s a painter and painting instructor at the School of the Art Institute and was a very generous subject for me as I was writing Paris, He Said.  She let me visit her study and ask her questions about her art-making process.  [Tangentially, I first met Susan when I worked for five years at the School of the Art Institute after graduate school.  An ex-boyfriend of mine was a student there and we lived together for five years; I witnessed his messy and inspiring creative process during those years (often wishing he were a more fastidious housekeeper but knowing he probably never would be.)  And in college, I was a French major.]

Paris is such a character in itself--I bet the research was a great deal of fun, no? I realize you were once a student there, but did you return? Did anything surprise you in the way your characters relate to Paris--and the way Paris relates to them?

It was a lot of fun to write about Paris and to do the research for this novel.  I’ve been to Paris about a dozen times since 1991, the year I was a student in France (I studied in Strasbourg but took five or six trips to Paris during that year.)  I made two trips to Paris, both during the first week in September in 2013 and 2014, while writing this novel.  Even though I knew how beautiful a city it was, I hadn’t been there for a number of years before my 2013 trip, and I think it startled me just how beautiful it is.

My main characters, Jayne and Laurent, don’t take their privileged lives for granted in Paris, though Jayne does find herself getting habituated to the city’s many marvels and awe-inspiring beauty after a few months.  Laurent is from a village outside of Dijon, which is several hours southeast of Paris, and he has always thought of Paris as a city of wonders, and I wanted that marvelousness to come through on every page, if possible.  He is a devout pleasure-seeker, Jayne less so.  And it was this disparity in temperament where I tried to make the conflict was most palpable between them.

What was so fascinating about your novel is the way you explore how people navigate what they think they want, and how they discover what they really need, instead. Could you comment on this please?

I don’t think we often truly know what we want.  We believe that we want something, but then we get it and it’s not what we hoped for.  There’s certainly some of this conflict in Jayne, though she’s aware before she moves from New York to Paris that there is no ideal situation (or ideal man.)  And she also knows that what a person sees from the outside of a relationship is almost always different from what the person on the inside sees.  Her privileges in Paris come with costs, that’s for sure.

I also loved the way you seemed to pull of layer upon layer in your characters. As they discover themselves, so do we. Can you talk about your writing process for this particular novel? Did it differ from your prior novel in the ease of the writing?

This was the hardest novel of the several I’ve written to write (most of these novels are unpublished and sitting in a drawer.)  My previous book (and first published novel) Little Known Facts came out quickly and more or less joyfully.  I’d never had an experience like it before those months in 2011 when I was writing LKF.

I wrote six or seven drafts of Paris, He Said before my editor at Bloomsbury signed off on it.  She worked very hard on this book too; she had a lot of good advice to give and I followed a lot of it.  By the end of last year, I looked like a zombie. I was teaching full-time while working on this book, and trying to pay attention to my partner Adam, my other friends and family, and exercise and eat properly.  I don’t know if I’d ever felt more worn out in my life.  I also wasn’t sure what I thought about the novel until I had several months away from it.  I like it, dieu merci.  For a long while after we finished the copy-editing, I didn’t want to look at one word of it.

Hmmm…well, my future.  I hope Bloomsbury will continue to publish my work.  I hope readers will find it and like it.  And I hope that one day, I will catch up on emailing and house-cleaning.

I also worry about our country’s, our planet’s future – I hope that people will be kinder to each other and to the earth.  Our collective future depends on it.

Who is your favorite ‘80s rock star?

Oh, Prince, for sure.  But Rick Springfield is a close second.  And Madonna is a close third.
Posted by Caroline at 4:45 PM