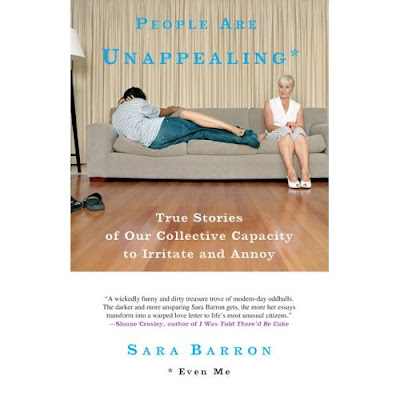 Welcome to the strange, raunchy and savagely funny world of Sara Barron.  In People are Unappealing, she riffs on everything from waitressing meltdowns at the Olive Garden to dirty dancing on the bar top of New York City’s notorious Coyote Ugly. Barron’s gimlet eye seeks out the most appallingly strange situations, which also just happen to be the most hilarious. Trust me, this is one book—and one writer—you don’t want to miss.

What's so interesting about Sara is..well, Sara.  While her therapist thinks she has "a crippling amount of self-absorption",  it's clear she isn't self-absorbed to the point of not noticing the foibles of everyone else.  "I don't hate humanity as a whole," Sara says.  "Just in parts. I'm a big fan of well-mannered construction workers,  good tippers, babies, and Christmas tree farmers, but the good people just aren't as fun to write about"

People are Unappealing came about because of the solo show she was doing, and the lucky appearance of a literary agent who told Sara this could be a book. But writing her second collection has its problems.  Says Sara, " I'm going to try to buy a second computer just for book writing that won't have access to Facebook.  Honestly, I feel like People are Unappealing would've taken half the time to write or been three times as long if I didn't spend upwards of two hours a day checking the "pages" of every ex-boyfriend or high school nemesis. "

What's next? Says Sara,  "I'm working on another collection, tentatively titled, PEOPLE ARE JERKS, focusing on sing-a-longs, Facebook and hand sanitizer.  And  I just want everyone writing to remember, that when it comes to humor writing, remember: economy. of.  words.  Also, the funniest word goes at the end of the sentence."

Go read the book.  When I was reading the book,  I was laughing so hard on the subway that people got up to sit at the other end of the car.